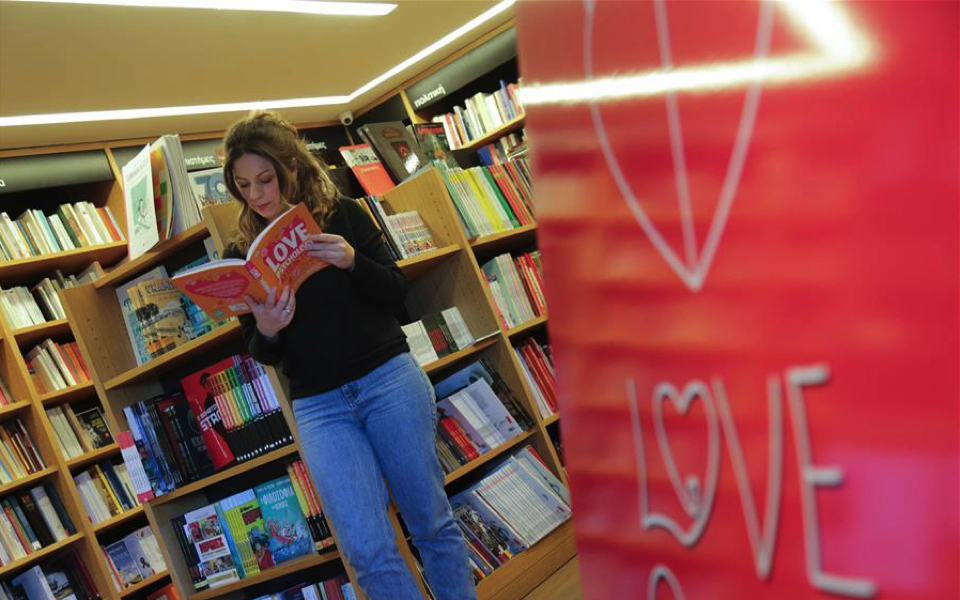 A woman looks for a book at a bookstore in the Athens northern suburb of Kifissia, on Wednesday, to celebrate Valentine's Day. 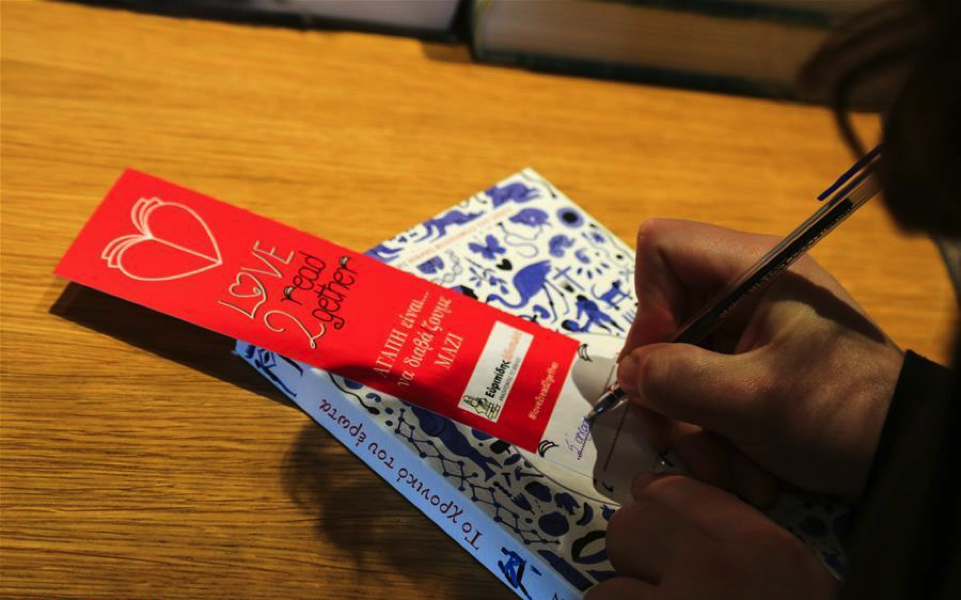 A woman writes a wish on a bookmark for her beloved one after buying a book at a bookstore in the northern suburb of Kifissia, on Wednesday, to celebrate Valentine's Day.
MARIA SPILIOPOULOU
February 15, 2018 15.02.2018 • 17:55

Greeks celebrated Valentine's Day on Wednesday adding books to their baskets next to the traditional blazing red roses, fluffy dolls and chocolates.

For those seeking something different to offer to their beloved ones this year the Association of Greek Publishers and Booksellers launched a campaign encouraging people across Greece to pick a book, write a wish on specially designed book marks for the day and read together.

"Love is to Read Together" was the motto of the initiative which received a warm welcome by Greeks, according to organizers of the Association of Greek Publishers and Booksellers (ENELVI).

Despite the eight year debt crisis, 72 percent of Greeks celebrated romance and love by exchanging small gifts, according to a survey carried out for online store Picodi, Kathimerini reported.

This year Greeks spent on average 74 euros for Valentine's Day presents. Dinner at a restaurant was on the top of their choices by 28 percent, followed by exchanging clothing items, desserts, perfumes, jewelry and other presents, including books.

ENELVI members hope that in the future the purchase of books for Valentine's Day will rank higher on this list.

Three out of ten Greeks aged over 15 years read one to nine books per year, according to a survey carried out in 2010 for the National Book Center.

However, the debt crisis has taken a toll also on booklovers, publishers and booksellers. The market has shrunk. For example, in 2015 the number of new book titles published stood at 6,700, about half of the pre-crisis average.

A book is not an expensive gift, but its selection is not an easy task compared to purchasing a box of candy or flowers. It takes more time and effort, Govostis explained.

"A book is a great gift as long as you know the person you love well, you invest time to [choose] and you know about books. If you pick the right book I think that this is something magical, you open a new world and I believe that it is a gesture which may be more appreciated. In addition this present is timeless like love after all," he stressed.

"The campaign started timidly, but people's reaction was great, exciting, larger than we expected," Konstantina Polichronopoulou, head of Evripides bookstore in the Athens northern suburb of Kifissia told Xinhua.

It was not only young lovebirds who embraced the idea, but also gray-haired booklovers or mothers who chose books for their children, she explained.

Aggeliki Karakonstanti was one of the Greeks who opted to buy a book for her significant other rather than another gift this year.

"I think it's a beautiful initiative for this day. I believe that a book is a marvelous present for the people we love. I chose Alain de Botton's "The Course of Love" and I also got the campaign's book mark so I can write a wish before offering my gift," she told Xinhua.

US Embassy in Athens spearheads initiative to help Balkan NGOs