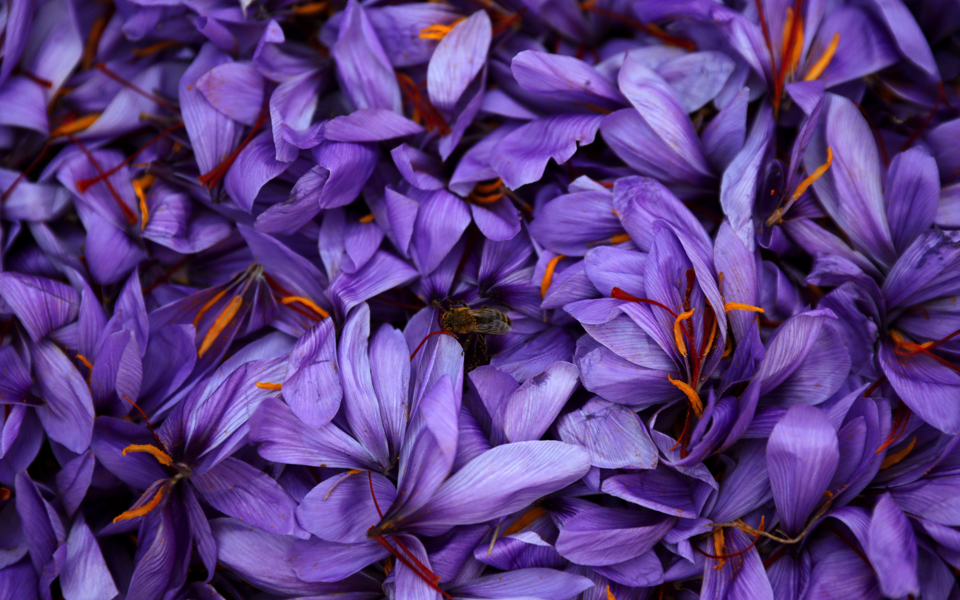 A bee is seen on saffron flowers in a field in the town of Krokos. [Alkis Konstantinidis/Reuters] 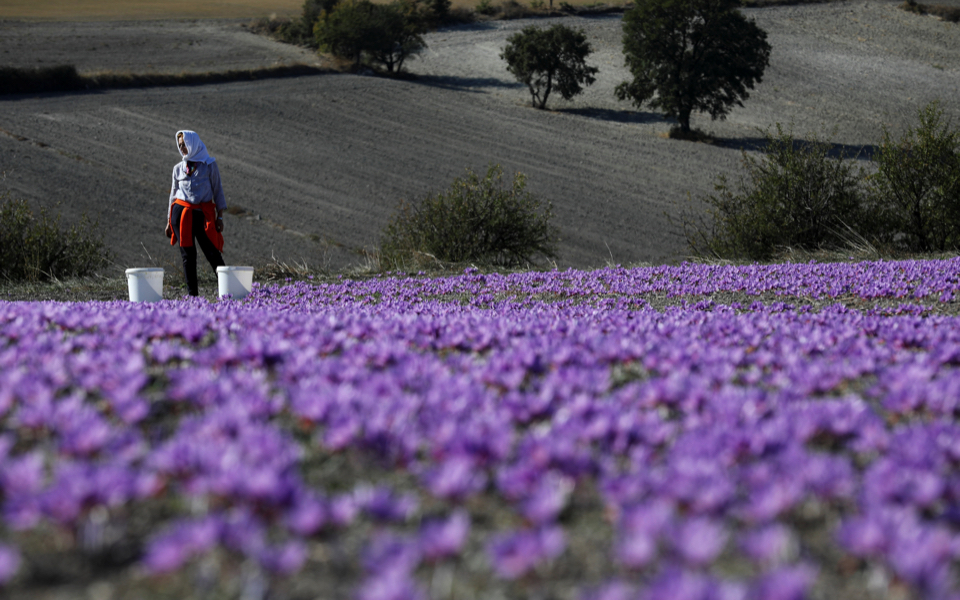 Evangelia Patsioura pauses as she harvests saffron flowers at her family's field in the town of Krokos. [Alkis Konstantinidis/Reuters] 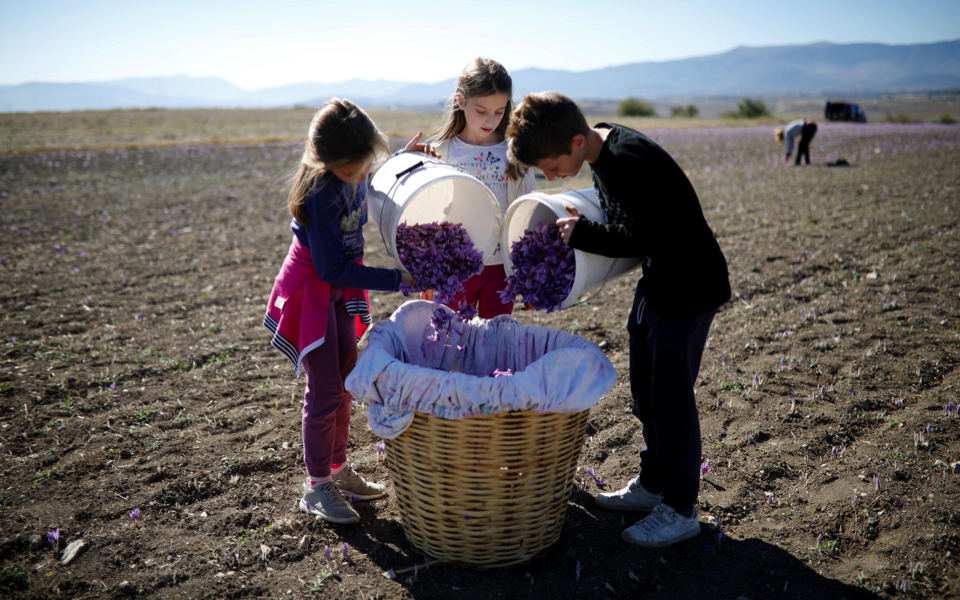 (R to L) Nikolas Patsiouras, Maria and Evangelia Patsioura fill a basket with saffron flowers at their family's field in the town of Krokos. [Alkis Konstantinidis/Reuters] 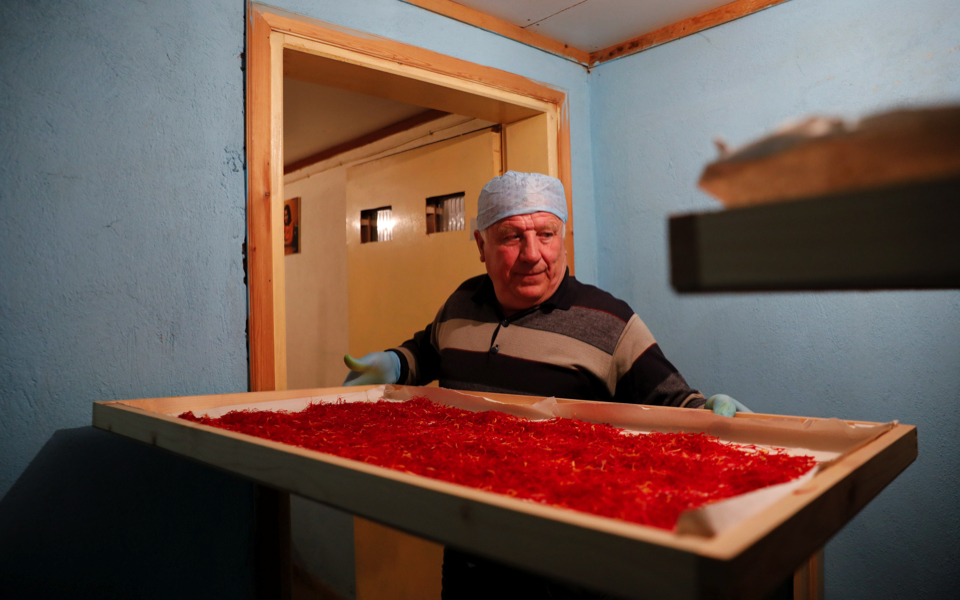 President of the Cooperative of Saffron Nikos Patsiouras prepares to dry saffron stigmas in the town of Krokos. [Alkis Konstantinidis/Reuters] 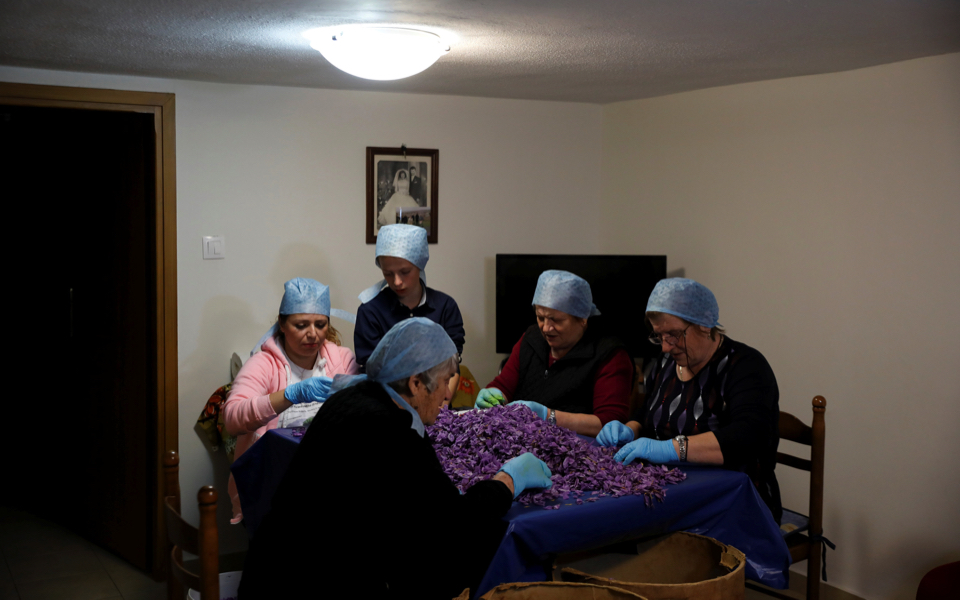 Members of the Patsiouras family check saffron flowers for stigmas at their house in the town of Krokos. [Alkis Konstantinidis/Reuters] 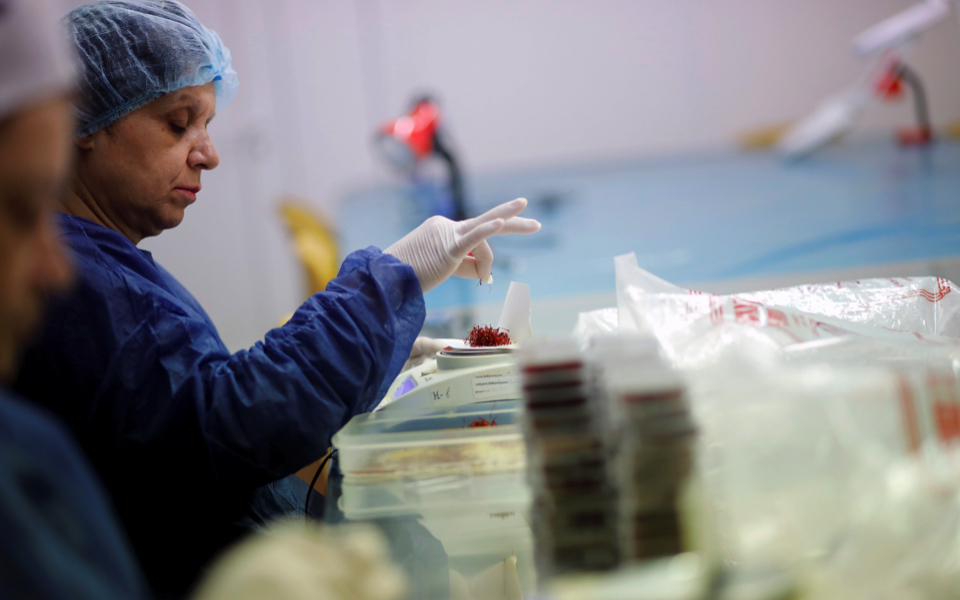 A worker weighs one gram of dried saffron stigmas at the Cooperative of Saffron premises in the town of Krokos. [Alkis Konstantinidis/Reuters] 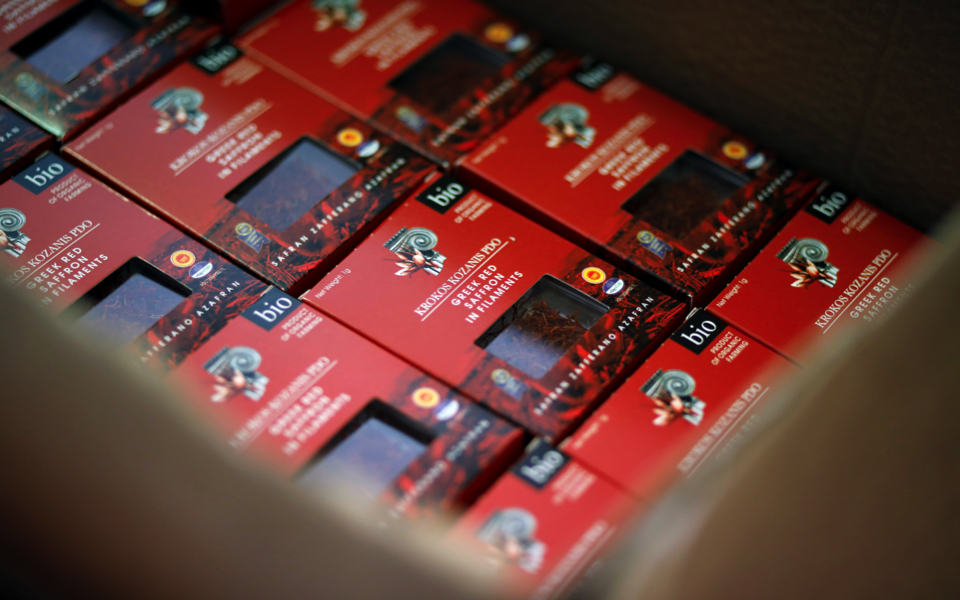 Packets of dried saffron are seen at the Cooperative of Saffron premises in the town of Krokos. [Alkis Konstantinidis/Reuters]
KAROLINA TAGARIS
November 9, 2018 09.11.2018 • 17:35

Every autumn, Zisis Kyrou is more often found plucking flowers in northern Greece’s purple saffron fields than in his office as a civil engineer.

Saffron – the spice so expensive it’s called “red gold” – has brought jobs and money to a region better known for coal mines and unemployment. A year ago, its producers began exporting to the United States. Now they’re looking to China.

Most are young Greeks who were shut out of the job market during Greece’s nine-year economic downturn. They returned to the countryside to make a living off the land.

“It was hard to find work in your field during the crisis, particularly in civil engineering, because there was no construction,” said Kyrou, 34, as he harvested with pollen-stained hands.

In 2012, he returned to Greece from London with two university degrees. He eventually opened an engineering office in his village of Krokos, but most of his income comes from his four acres of land, which he hopes to increase. “I didn’t imagine I’d return,” he said. “But it was a decision I don’t regret.”

Greeks have been cultivating saffron for three centuries in the countryside surrounding Krokos, which takes its name from Crocus, the saffron flower. Alexander the Great is said to have used it to heal battle wounds. But until 2000, production was limited to 30 kilograms a year for domestic consumption, said Nikos Patsiouras, who heads Greece’s Cooperative of Saffron.

That changed in 2008, when the crisis hit. Greece now produces about four tons a year, 70 percent of which goes abroad. The cooperative has doubled its members from 494 to 1,000. It also has increased its land from 592 acres in 2008 to 1,349 acres. “A lot of young people found work in the fields – scientists,” Patsiouras said. “I believe more will join.”

Signs of the crisis are visible across Krokos, where shuttered shops line the streets. Unemployment in northwestern Greece is 23.5 percent, three points higher than the national average. But the fields are abuzz. “We have God on our side, who gave us such a unique product,” Patsiouras said. “We hold on to it like the apple of our eye.”

Saffron grows only in this region of Greece. Marketed as Krokos Kozanis, one gram costs about 4 euros in Greek shops. It takes 150,000 flowers to make a kilo of the spice, which sells for about 1,500 euros. Flowers are handpicked, and at the cooperative women in blue overalls weigh and package it. They are forbidden to wear make-up and perfume, to protect its flavor.

Iran is by far the world’s biggest saffron producer, but demand for the Greek variety is rising, Patsiouras said. Greece is in talks with China for exports in 2019.

In the Patsiouras household, three generations have gathered after a day of harvesting to remove the saffron strands from the flowers and dry them. “If we don’t transfer this tradition to the next generation, we will fail,” said his daughter-in-law, Maria Patsioura. [Reuters]

American Farm School director: ‘Nothing is possible without knowledge’

Protecting the rights of the refugees who don’t make it

Athens walks away with innovation prize at Lisbon ceremony