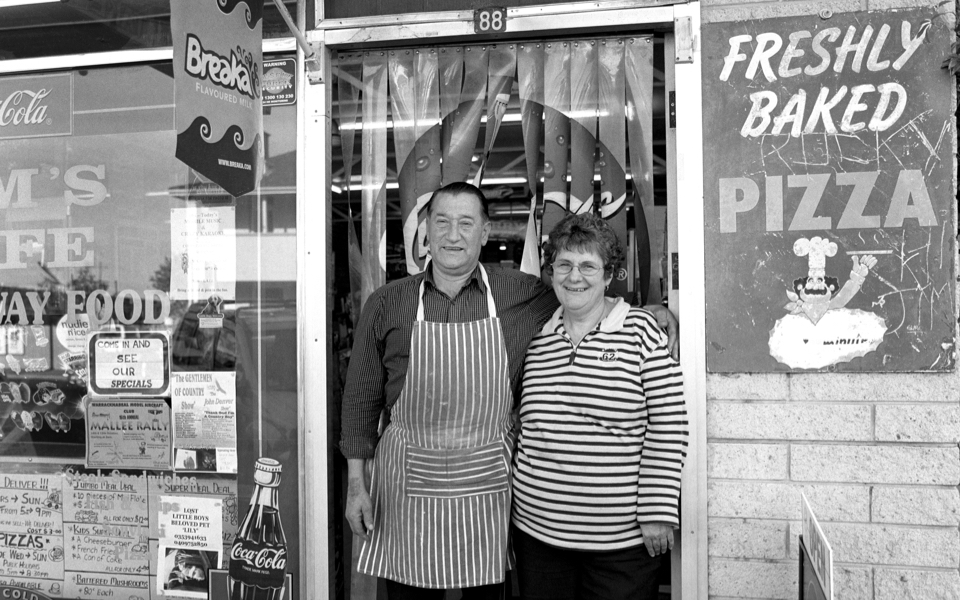 A pair of Greek migrants pictured outside their business in Australia. As the first generation of Greek immigrants started aging – the majority of whom never assimilated and never learnt the English language – the diaspora community found itself in need of Greek-speaking caregivers. 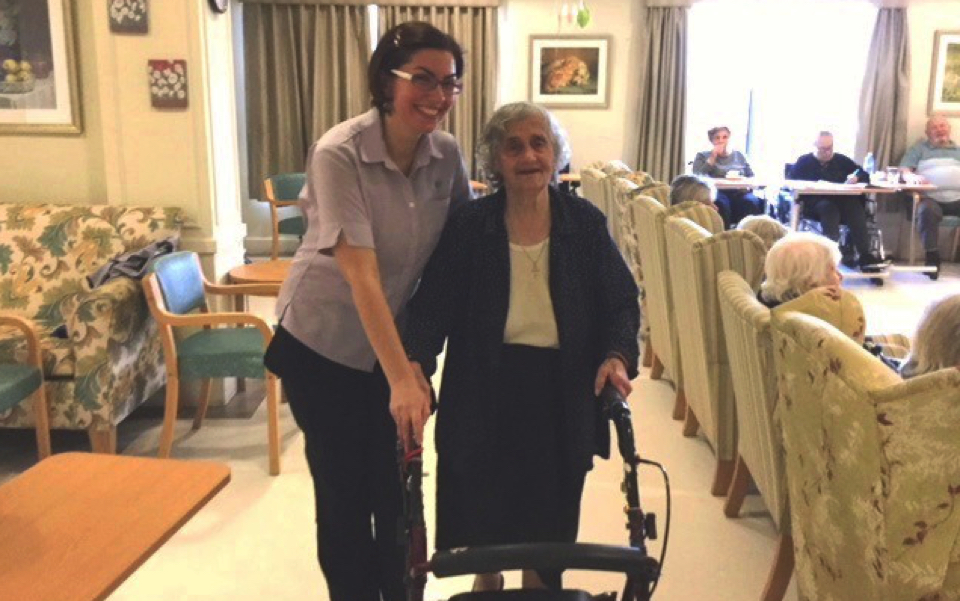 Thirty-three-year-old Dimitra will lock her door tomorrow morning and breathe in the chilly Melbourne air. It’s been four years since she left Greece to make a new start in Australia – but she’s still not used to the cold weather in July. She’ll take the bus and, within a few minutes, arrive at her workplace: a geriatric home. As always, Mrs Sophia will greet her and ask her in Greek, “How are you, my daughter?” Mrs Sophia has also made the same journey as Dimitra – but on a boat, as all Greeks did in the great migration of the 1950s and 60s. It’s a great consolation for Mrs Sophia that someone is taking care of her in her older years who is from her home country and speaks the same language.

As the first generation of Greek immigrants started aging – the majority of whom never assimilated and never learnt the English language – the diaspora community started to face a growing problem. There were not enough Greek speakers to fill these geriatric care positions and recent immigrants – products of the Greek economic crisis – were not interested. However, the Fronditha (meaning “care”) charity organization, one of the most important and long-standing organizations within the Greek community, found a solution.

Following negotiations, Fronditha reached an agreement with the federal government. Greek-speaking caregivers would be authorized to travel to Australia and work in one of the organization’s five care homes or in its home care program, giving them the opportunity to obtain a permanent residence permit in the country. It is the only organization in Australia that has achieved such an agreement.

When Dimitra found out about the Fronditha program, she jumped at the opportunity. She was already in Australia on a student visa, and was looking for a way to stay permanently.

Geriatric care was not an area she knew much about. In Greece she had worked in marketing and customer service, but had struggled financially. “I knew that I had to go abroad,” she told K magazine. She first arrived in Australia in September 2014, a stranger among strangers. The next year, she began working in Fronditha, alongside her studies, and quickly gained a work visa. According to the agreement between Fronditha and the government, she could become a permanent resident after four years.

“The first day at work was a shock,” she admits. “I had no experience in the field. I had never been in contact with human nature on such a visceral level: with the end of life. Now I have surpassed many of my fears. It requires a lot of patience, but I have learnt to love my job.” According to Dimitra, most expatriates that she looks after never really adjusted to Australian culture. They are people who came to the country and worked in factories, or women which stayed at home and looked after the children. Some women decided not to learn English so their children would learn Greek at home. Many never returned to Greece as they didn’t have the money. Instead, they lived a “Greek life” among the diaspora community. “It is like looking after my grandmother or grandfather,” says Dimitra. “There is a lady that keeps asking me: ‘Are you married? How old are you? How can you not have children at 33?’”

Language is very important for the elderly at Fronditha. “If you speak Greek, they feel you are part of their family. We also have more serious incidents of dementia, which sometimes lead to aggression. The moment they hear Greek spoken, they relax immediately.”

Dimitra is among the carers from the first agreement made by the government and Fronditha, in 2014. The results were impressive. There was a significant influx of new staff who knew the language, the culture and the temperament of elderly Greeks. This contributed to a dramatic decline in complaints and more demand for the organization’s services. Recently, the contract was renewed, and will be effective until June 2023.

Within this framework, Fronditha has the right to hire and issue a work permit to 20 Greek-speaking caregivers every year, up to 55 years of age. “It’s a great opportunity for a young person who wants to come here. The job is demanding, but you have the potential to earn money, make savings and live a very good life.”

It has been 41 years since a group of diaspora Greeks first got together with the aim of achieving the vision of supporting and caring for elderly Greeks in Australia. The founders of the Australian Greek Society for the Care of the Elderly – as Fronditha was known at the time – had diagnosed many problems faced by older expatriates and foresaw that these problems would rise exponentially as immigrants from the 1950s and 60s aged.

The first care home for elderly Greeks, Pronia, was founded in 1983 in Victoria. This was followed with the opening of the Stegi geriatric home in 1980, while 1993 saw the opening of Galini – a home designed exclusively for people with dementia. The association changed its name to Fronditha in 1996, and soon opened other care units in Melbourne. Today, with the support of donations and sponsorships from the Greek community, Fronditha also operates day care centers, caters to the elderly in their homes and has set up independent living units. Overall, Fronditha supports 2,000 elderly people each week.

“There were still many complaints about dependents and their relatives who could not communicate with the staff,” says Fronditha’s managing director George Lekakis. “Then came the idea of a contract to bring carers from Greece who would stay.” It was a difficult bet, especially during a period of immigration crisis. “But the Greek community is big, active and respected. When we ask for something from the government, they take us seriously.”

It was a great relief for everyone involved that Fronditha would be staffed with Greek-speaking employees over the next three years. “I believe that the next few years will see a large rise in demand for geriatric facilities. The immigrants from the 1950s have huge needs with regard to their health and the program can guarantee staff who speak their language.” According to Lekakis, 70 percent of Greeks who arrived in the first wave of immigration never learnt English. Reaching old age now, they need to feel safe. “They need to feel cared for and loved. When they can communicate, they can ask for the help they need, they can also display affection, as if they were our family. Taking care of our parents and grandparents, showing them respect, is an inextricable part of Greek culture.”

Today, the Fronditha work force amounts to approximately 650 people, 25 percent of whom are Greek. “I want that figure to reach 50 percent,” says Lekakis. There is already high demand to participate in the program. The elderly population is growing and there are opportunities for professional development. “There are people who are interested in developing a career in this area, who are studying nursing on the side and want to gain permanent residence. Australia is not in crisis. As long as you have work all your needs can be met.”

The Greek defending the rights of Aboriginal Australians

Greece ranked as the worst country to live as an expat