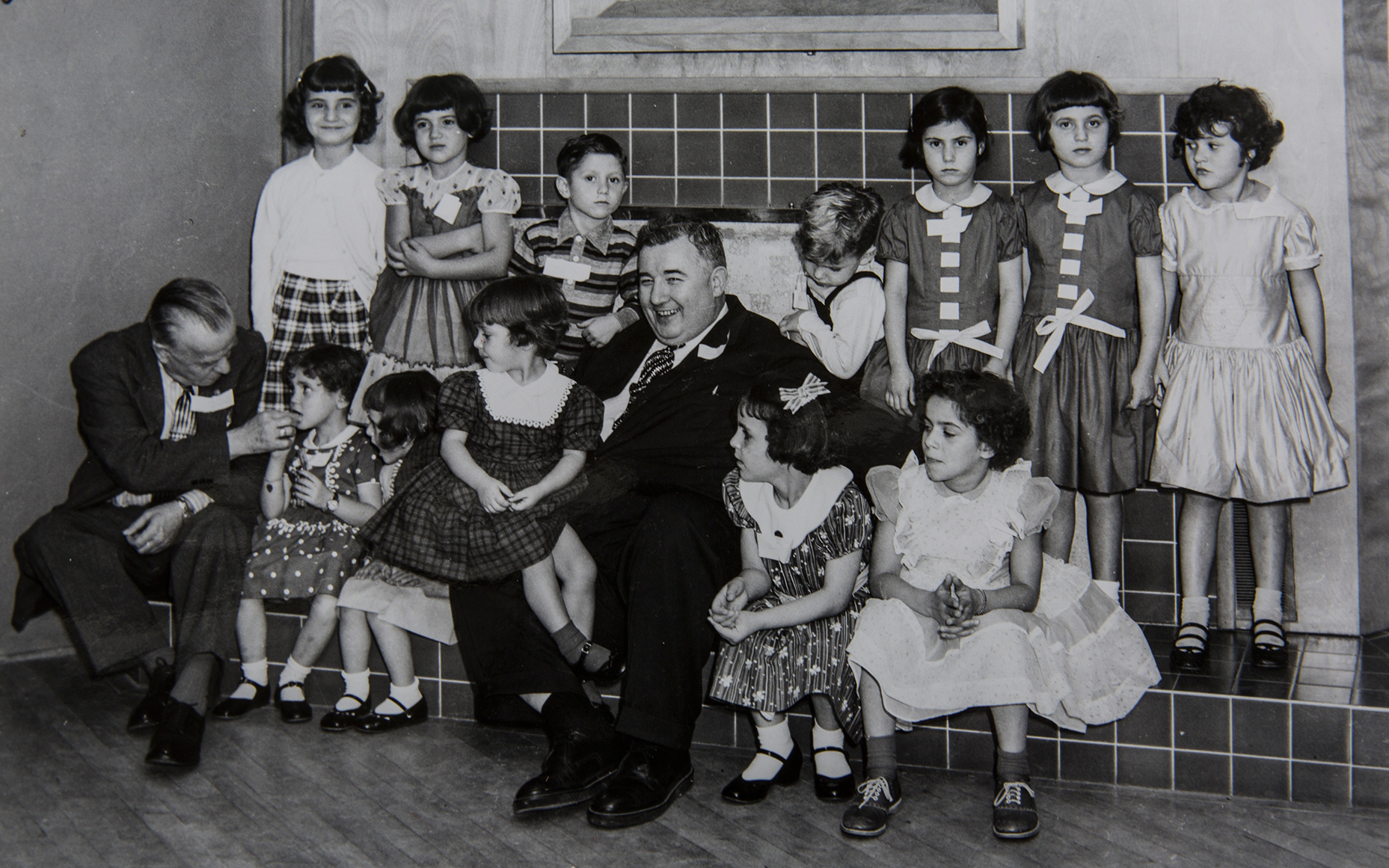 AHEPA’s Leo Lamberson (middle) and Senator Robert Wilson (left) are pictured at left pictured with adopted Greek children at a party in San Diego in 1956. 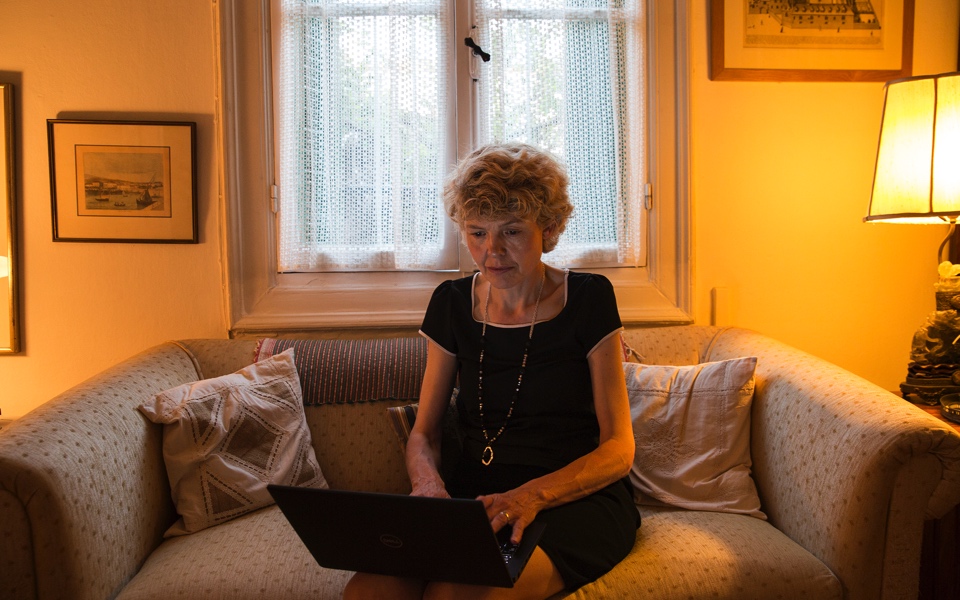 April 26, 2019, Good Friday. Pantanassa Church in the town of Patra, in the northern Peloponnese, is full of devotees waiting for the procession of the flower-decked Epitaphios to begin. Father Konstantinos Papadopoulos approaches the microphone and makes an unusual plea to the faithful. He explains that among them is a man who was abandoned as a baby – with no personal identification – outside the church in November 1954 and adopted by an American couple. “They found the baby on these very steps that we will now walk down with the Epitaphios. We owe him our help. He is our child, from our parish,” he says, before inviting anyone who knows anything, either from their own family or from the neighborhood, to speak to him “discreetly,” so that he can convey the information to the appropriate person.

Merrill Jenkins is sitting in one of the front rows but doesn’t speak Greek and cannot understand the words of the priest. Professor Gonda Van Steen, a Greek-speaking Belgian who holds the Koraes Chair of Modern Greek and Byzantine History at King’s College London, is translating the short speech for him.

Van Steen is currently finishing a book dealing with the little-known subject of the mass adoptions of Greek children from 1949 to 1962. Her research findings are staggering: During this time, approximately 3,200 infants, toddlers and even teenagers left Greece. Initially with summary and sometimes even shady procedures, they were handed over to adoptive parents in the United States. Following the revelation of the scandal of illegal adoptions, the “export” of infants to the US was curtailed. Numerous other children were sent – through stricter procedures – to the Netherlands.

Jenkins is one of the thousands of children discovered by Van Steen who ended up in the US. He is in his 60s. He always knew he was adopted, but after the recent death of his wife he decided to embark on a journey to find out the identity of his biological parents. So far, his mission has not been successful. We followed him when he visited with the branch of the State General Archives in Patra with Van Steen, with his hopes raised. The goal was to find something that could be linked to his biological parents. After two hours he left the meeting disappointed. He learned nothing more than what he already knew, namely that he was found on the steps of Pantanassa on November 26, 1954. He was just 15 days old, and he had a note pinned to his clothes that said he had been christened and was called “Mitsos.”

The psychological and practical support offered by Van Steen to numerous adopted Greeks who are searching for a light at the end of the tunnel is invaluable. The Belgian professor has lived in Greece for several years, speaks fluent Greek and helps them navigate the maze of – often unfriendly – government agencies as they attempt to trace their origins.

She first became aware of the story in 2013, when she was teaching Ancient and Modern Greek at the University of Florida. A young man sent her an e-mail requesting information on adoptions carried out in Greece in the 1950s. He told her that his mother and his aunt remembered having been adopted in Greece.

It was the initial spark that led her to seek more evidence, since there was no scientific study on the topic. Over the next six years, she would discover information about thousands of adoptions approved by the Greek courts, sometimes dozens per day, and concluded with an urgency that would make us shudder today. Back then, Greece was a wounded country that did not seem to object to thousands of its children being sent off to the United States for adoption – a country that was supporting Greece financially.

Although the courts green-lighted the adoptions, the circumstances under which children ended up in nurseries/orphanages and then on a list for swift adoptions deserve closer scrutiny. The research showed the children were often handed over either by the mothers themselves, who feared the social stigma of being unmarried with a child, or by members of their families.

Other times, as in the case of the Agios Stylianos orphanage in Thessaloniki, parents were falsely told their child had died at birth. There were also some trafficking rings, mainly based in Patra, which included members of the American Hellenic Educational Progressive Association (AHEPA), and were basically an “export” machine. This, of course, should not lead to the erroneous conclusion that all adoptions were illegal.

However, this is the first time a researcher has compiled such a list on the journey of thousands of Greek children to other countries, as there has never been an official record on the adoptions during the Cold War period.

For Van Steen, the political environment of that period is directly linked to the mass export of children. The devastating Greek Civil War had just ended, and the first group of children who left were described as “war orphans.” Some had indeed been orphaned, but the same description survived in peacetime, as it “facilitated” their adoption in the United States. Politicians in Greece did not want to raise additional barriers to a practice that met a rising need in the US, from which we expected investments.

After the Second World War, the US experienced a baby boom. Having children was almost a social requirement of the time. Many childless couples – often where the men had served in Greece or elsewhere during the war – saw a solution in adoption. Other times, Jewish survivors who had lost their children in the Holocaust chose to adopt Greek children who shared similar physical features. Occasionally, Greek Americans also adopted children from Greece.

Roula Moustakaki, who accompanied Merrill Jenkins to Patra, was also an abandoned child who traveled from the city’s orphanage across the Atlantic. “Thank God I was taken by Greeks so I kept my language and religion. Others were born in Greece and today they are struggling to form a connection with their country of origin,” she told us as we visited a building which once housed a nursery. Today, a kindergarten is housed in the old public nursery, and all that is left of the past are the iron railings. There is also a small museum exhibiting objects left behind by the institution that thousands of babies passed through. Looking for traces of their biological families, the adoptees find teaspoons, plates and clothes instead of answers.

“I walked into this museum with the few things that have remained since then,” Moustakaki tells Kathimerini. “I started to wonder: Was I here? Was I christened in this? Did I eat with this spoon? When I was crying, did anyone come to pick me up or give me a hug? Because I didn’t leave my kids on the swing when they cried.” She decided to start looking for her own biological parents recently, but she first felt the need when she became a mother herself, decades ago.

Asked the difficult question of what she would say to her biological mother if she had had the opportunity to meet her, Moustakaki responds immediately: “First I would want to know why she abandoned me. If she had a family and relatives. Then I would ask if she thought of me all those years. Did she wonder whether I was alive or dead, whether I ended up in China or the US? If I had a good life, where I ended up going? I believe every woman who brings a child into the world, whether she recognizes this fact or not, thinks about it. I say this because I call my kids many times a day. I’ve been present throughout their lives.”

Jenkins was trying to hide his emotions on the steps of the church where he was left as a 2-week-old baby before police officers picked him up to hand him over to the Patra Nursery.

“If I had the chance to meet my mother I would tell her I have no hard feelings and that there must surely have been some serious reason why she decided not to keep me. The reason I’m looking for my roots is that, at this age, I’m at the point of wanting to have some sort of closure in my personal history, to know what happened. I need it.”

Having spoken to hundreds of adopted people from Greece, Van Steen knows that many of them, no matter how successful they have become professionally, or happy their family lives today, always feel an certain emptiness inside them.

Before saying goodbye, Van Steen adds one more thing: “I think this massive wave of adoptions is a terrible loss for your country. In a sense, it was a kind of brain drain, because you lost thousands of healthy, talented and worthy people who succeeded in other countries.”