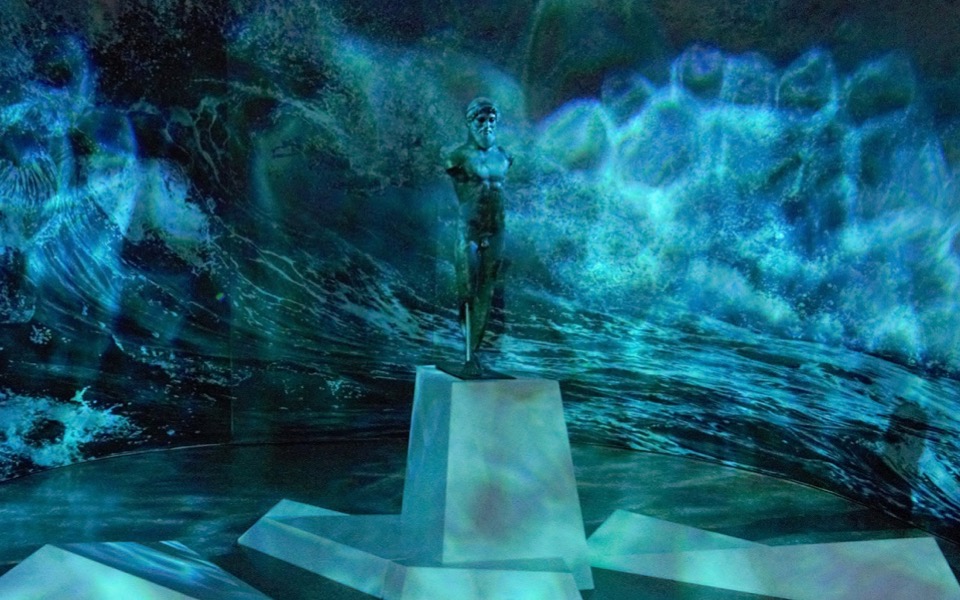 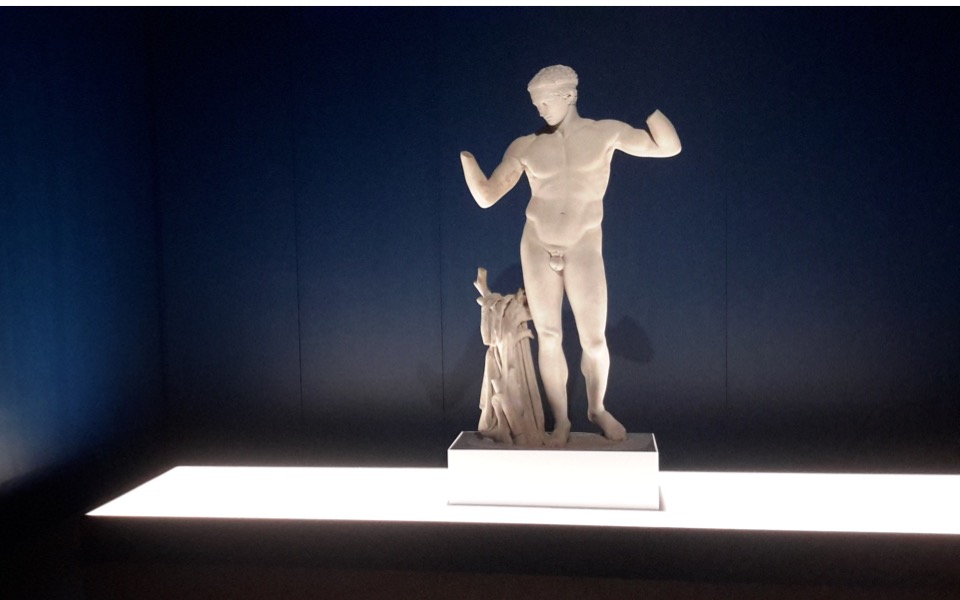 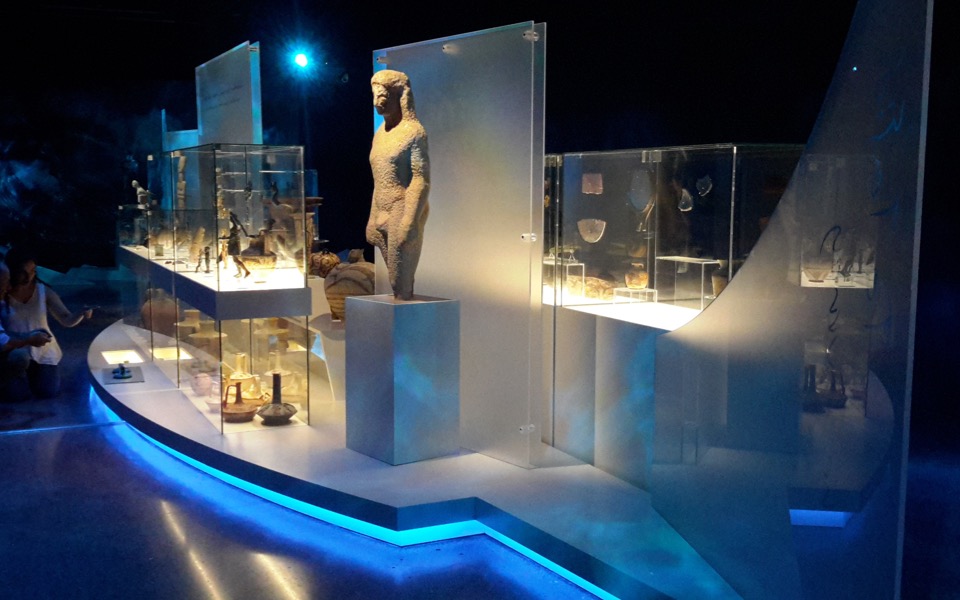 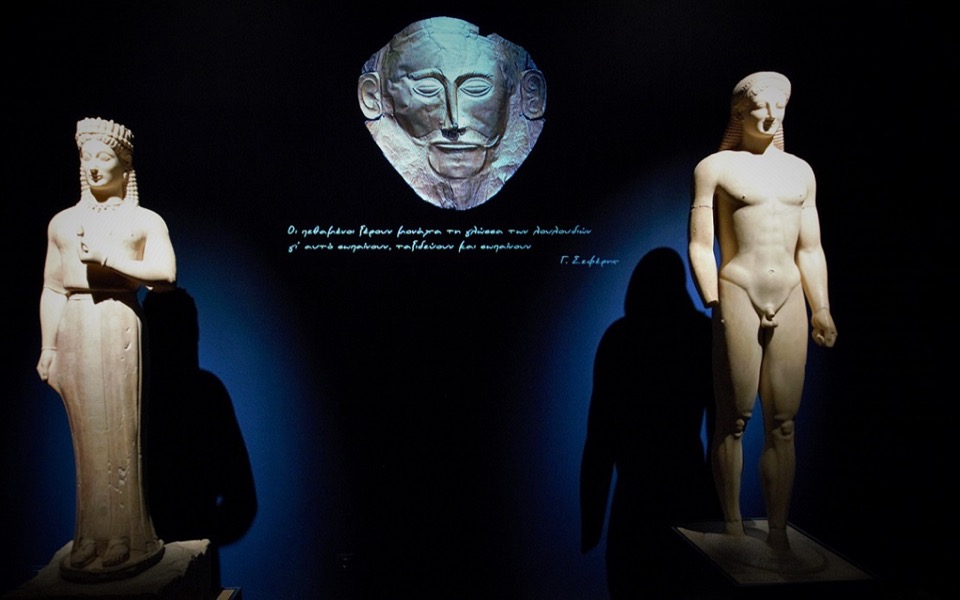 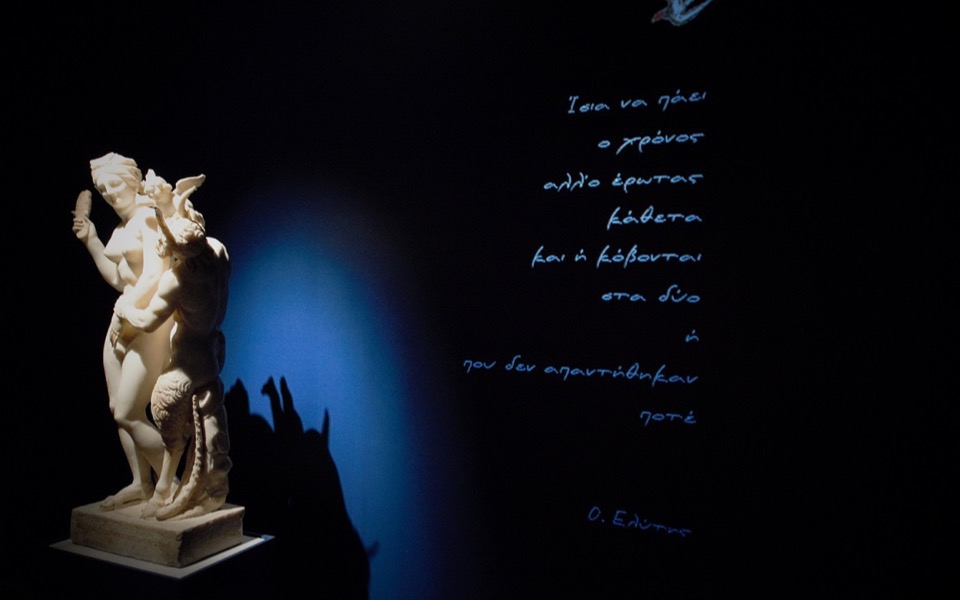 Sound is an intrinsic part of a brand-new exhibition at the National Archaeological Museum in downtown Athens, with the creaking of a wooden ship signaling the start of “Odysseys,” which marks the 150th anniversary of the country's first museum.

Inspired by Homer's epic, the exhibition takes visitors on a journey through time that is full of adventures and symbolism, starting with a beautifully lit group of display cases in the form of a ship. Here, pottery, marble sculptures and other objects testify to life in neolithic settlements, Minoan Crete and the Mycenaean world.

Museum director Dr Maria Lagogiannis, who curated the new exhibition, explains that the aim of “Odysseys” is to recount simple and heroic tales from the annals of time that have touched countless lives. The exciting adventures and feats of heroes unfold on ceramic items: Perseus being pursued by monstrous gorgons; Odysseus tied to the mast, resisting the calls of the sirens; Heracles and the Argonauts. The aforementioned ship also showcases a Hittite silver vessel in the form of a stag and finds from Cyprus, Syria, Palestine and Egypt, as well as other civilizations.

Visitors are presented with the wonders observed by the sailors of the Eastern Mediterranean from 5000 BC up until late antiquity, explains Lagogiannis.

The notion of travel is also evoked by juxtaposing ancient exhibits with modern verse.

In one part of the show, for example, we see a 480 BC bronze statue of Poseidon, found in the Gulf of Livadostra in Boeotia, beneath a star-studded sky (a screening courtesy of the Eugenides Foundation's planetarium) as the sound of crashing waves comes over the speakers, along with a “dialogue” between the verses of Homer, Odysseas Elytis and C.P. Cavafy.

“The exhibition traces enduring Ithaca as the locus of collective activity and personal fulfillment,” says Lagogiannis, making reference to the emblematic destination of Homer and Cavafy.

Arrival is symbolized by depictions of the Greek landscape (an olive branch, a bunch of grapes), while an early 1st century AD statue of Odysseus signifies the notion of homecoming.

The next section concentrates on man's struggle to tap natural resources, with displays including neolithic tools from Thessaly, a clay grain vessel from Knossos bearing symbols in Linear A script, and a clay tablet from Pylos bearing the first sample of the Greek language, Linear B, all marking amazing achievements in creating and managing societies.

A display showing an imposing statue of the goddess Athena beside a stele from Rhamnous depicting a priestess holding a temple key tells of man's efforts to stay on the good side of the gods. Visitors will also see displays referring to leaders, such as a gold funerary mask and breastplate from the second half of the 16th century BC found at Mycenae, or a 300 BC portrait of Alexander the Great. A black-figure amphora showing the strongmen of Pisistratus, the tyrant of ancient Athens, is evidence of the threats to democracy, a grave stele signifies the importance of civic participation, and the Decree of Themistocles expresses the Athenians' effort to vanquish the Persian menace. Here we are also reminded of the dangers inherent in democracy even for those who serve it: despite defeating the Persians at Salamis, Themistocles was later ostracized by the Athenians (visitors can also see the ostracon, or pottery shard, used in the voting process). A 460 BC marble votive relief found at Sounio of an athlete crowning himself is a reminder of the virtues of ethos and spirit.

The next section of the exhibition summons the visitor with the sound of chirping swallows, a symbol of love and rebirth. Here we see Aphrodite, Pan and Eros in a marble group (100 BC) found on Delos, representing union, while on the walls, the swallows from the Spring Fresco of Akrotiri on Santorini can be seen in an animated video projection. A shard of marble depicts the first kiss of a young couple, while in another display we see another kiss. Could it be Penelope and Odysseas? The Phrasikleia Kore, an Archaic funerary statue of a wreathed maiden is a somber reminder that even in life, death is ever-present.

The achievements of man are the focus of the last section, in a hall where Vangelis's “Dream in an Open Place” (from his “Voices” album) can be heard. This part comprises pieces that are symbolic of feats of intellect, such as the Diadumenos sculpture of a young athlete found on Delos (100 BC), Linear B tablets, and the famed Antikythera Mechanism, believed to be the world's oldest computer. Ending with a statue of Zeus, the exhibition is a moving narrative of man's collective and individual journey.

An online donation box to save the ancient theater of Cassope

Diving down to the Antikythera shipwreck