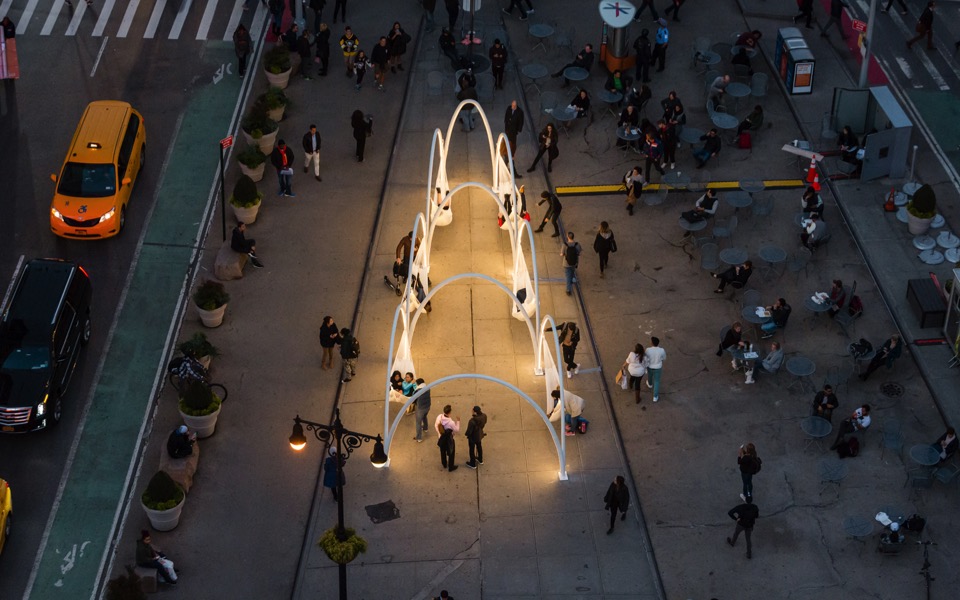 ‘Flatiron Sky-Line’ is an impressive sculpture/installation comprising 10 white steel arches twinkling with LED lights and complete with hammocks that invite the public to stop, take a rest and soak in the tranquillity of this small oasis in the bustling Flatiron Plaza. 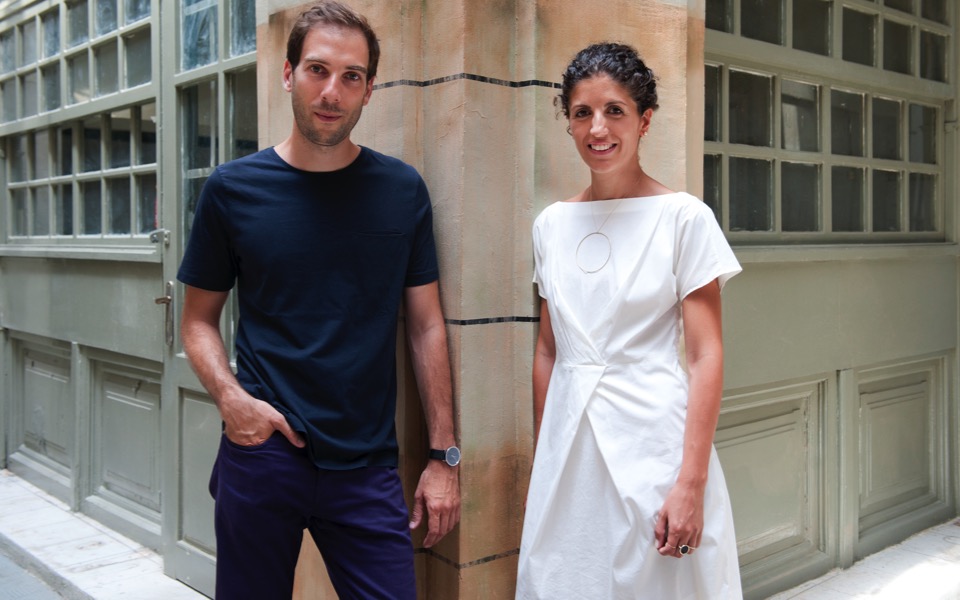 Eleni Petaloti and Leonidas Trampoukis, owners of the LOT architectural and design firm, which has offices in Thessaloniki and New York.
Tassoula Eptakili
January 25, 2017 25.01.2017 • 13:39

Few visitors to New York City can resist a snapshot of the emblematic Flatiron Building, which has stood since 1902 on the corner of 5th Avenue and Broadway at 23rd Street and was once the tallest building in Manhattan.

For the past few weeks, though, the Flatiron has been dealing with some serious photo-op competition from an impressive sculpture/installation comprising 10 white steel arches twinkling with LED lights and complete with hammocks that invite the public to stop, take a rest and soak in the tranquillity of this small oasis in the bustling Flatiron Plaza.

“Flatiron Sky-Line” is the work of two Greek architects, Eleni Petaloti and Leonidas Trampoukis, owners of the LOT architectural and design firm, which has offices in Thessaloniki and New York.

“We and another eight American firms took part in the Flatiron Public Plaza Holiday Design Competition organized by the Flatiron/23rd Street Partnership Business Improvement District and Van Alen Institute, whose aim is to create a temporary landmark in the heart of the district, a focal point for holiday events. And we came first,” says Trampoukis, brimming with pride.

The architect has good reason to be pleased, as their creation graces Manhattan’s second most famous plaza, behind Times Square. The 7 million views garnered by a video of the project on Time Out New York’s website is nothing to be sniffed at either.

What does this achievement mean for the firm?

“That more and more new doors are opening to us. We already have a proposal for a hotel and the offices of a major company in New York,” says Trampoukis. “Things in the US are not like in Greece. There’s a surge of work but also a lot of competition, especially for young architects like us. Thankfully, we have started being able to convince clients that we can take on big projects.”

The husband-and-wife team first crossed the Atlantic in the early 2000s as graduates of Thessaloniki’s Aristotle University pursuing postgraduate studies at Columbia. Their first professional steps in the US came right after.

Trampoukis worked, among others, with SOM, the firm responsible for One World Trade Center – the emblematic building that replaced the Twin Towers after the 9/11 terror attacks – while Petaloti combined her love of art and architecture with a job at the Guggenheim Foundation, later being appointed director at the Faou Foundation, founded by Japanese artist Mariko Mori, with a focus on large-scale sculptures and installations.

The couple hung out their shingle in 2012 and started developing their own style. From objects and installations to interiors and entire buildings, their work is now distinguished for its elegant minimalism and its ability to combine style with functionality. Their greatest recognition came from design bible Wallpaper magazine, which ranked them among the world’s most promising up-and-coming architects.

Motivated and creative, they have so far designed a loft in Brooklyn, a pop-up restaurant in Belgium, a museum in Michigan, an exclusive beach club on the Greek holiday island of Myconos, as well as the award-winning Cubic Housing complex in Thermi in Thessaloniki, among other projects. They submitted a proposal for a school in Finland and transformed an abandoned building from the 1950s into a modern university dorm in Thessaloniki. Their work has also appeared at international expos and competitions.

Their most recent project is the Nolita restaurant at the Semiramis Hotel in the northern Athenian suburb of Kifissia, owned by contemporary art collector Dakis Joannou.

The new year has found Petaloti and Trampoukis splitting their time between Athens, Thessaloniki and New York, dreaming big and working hard. “We’ve invested in an international career, but not once have we stopped believing in our country,” they say. “Things are not easy in Greece, but we refuse to live our life complaining and being pessimistic. We will keep fighting our battles.”