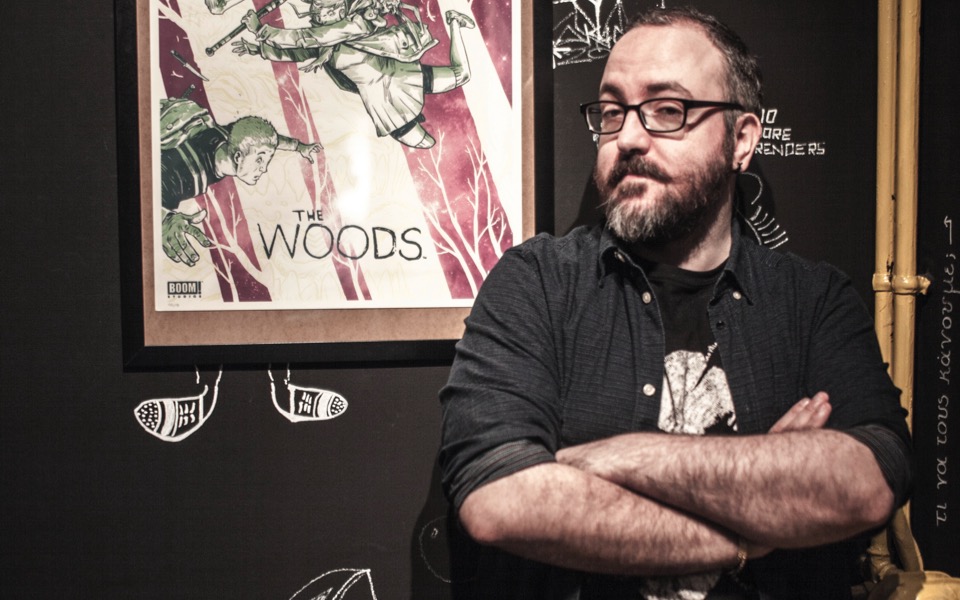 Michael Dialynas at a creative workshop. 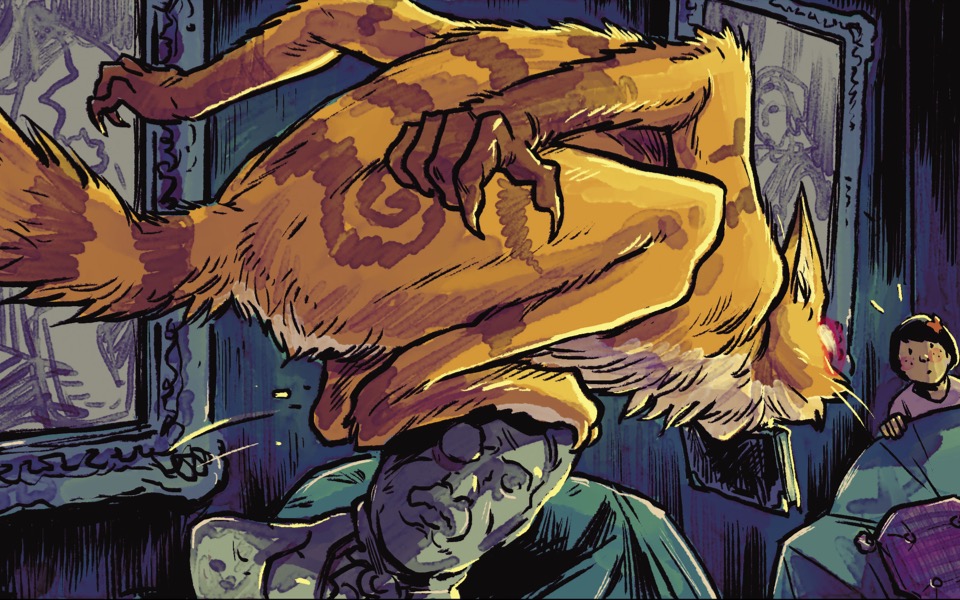 A panel from a story Dialynas illustrated for Gotham Academy, a comic book series published by DC Comics. 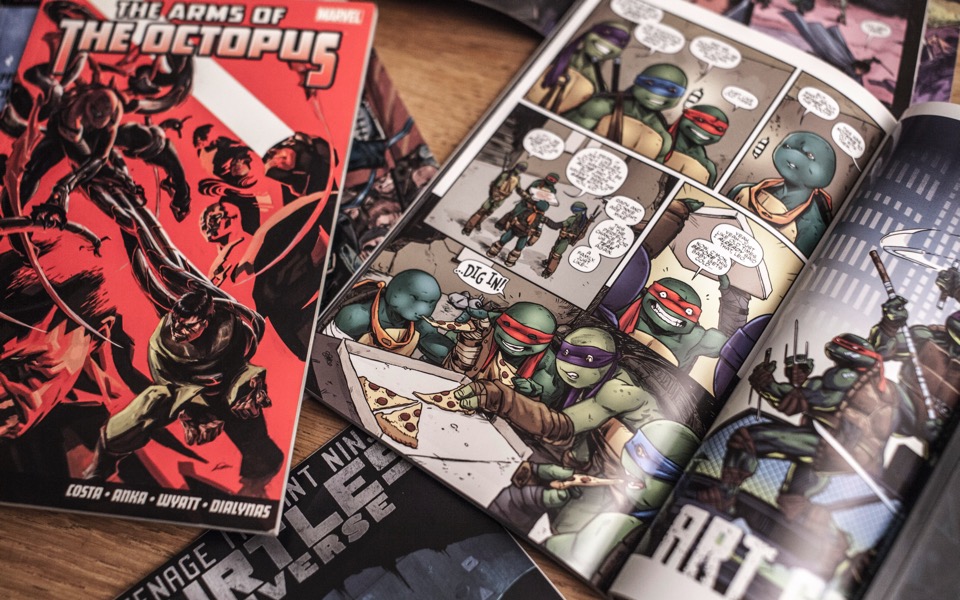 ‘The Arms of the Octopus,’ Dialynas's first collaboration with Marvel, which allowed him to work on his favorite childhood characters, the Teenage Mutant Ninja Turtles.
Tassoula Eptakili
February 19, 2017 19.02.2017 • 15:08

He likes to describe himself as a “comics artist and beast wrangler.” It makes sense if you know that he lives with six cats (only partly because his mother is an animal rights activist): “Shiro, which means white in Japanese, Oliver Twist, whom I rescued from a gutter, Easy, a gentle giant, Shadow, always hiding in the shadows, Scampy, the lady of the house, and Little Miss Scrumptious Swaggerpants, found dumped in a box by the side of a road. I’ve also put them in a story where the Teenage Mutant Ninja Turtles beat up a bad guy in an alley. I’m a happy cat daddy.”

Michael Dialynas has every reason to be happy, because he’s doing exactly what he dreamed of as a kid and in the past five years has worked with six of the biggest American comic book publishers in the world: Dark Horse, Marvel, Boom! Studios, IDW Publishing, Image and DC Comics. Success did not come without toil and trouble, but that made it that much sweeter.

With an Irish mother and Cretan father – “an explosive combination,” he says, laughing – Dialynas was born in Aghios Nikolaos on the island of Crete and fell in love with comic books as a child, reading through his dad’s sizable collection and going out with him to buy new issues of “Spiderman” and “X-Men.” The boy dreamed of creating covers for his favorite comic books; he wasn’t really interested in the pages inside then.

He moved to Athens after finishing high school at enrolled at a private college to learn the art of comics and cartoons. His first steps in the world of Greek publishing included the comic book “Trinkets” and a series called “Swan Songs” for Comicdom Press. In 2008, he started working at an advertising agency. “It was a serious educational experience,” he says. “I learned a lot there. Mainly to work fast and with other people.”

The onset of the crisis, however, found him in the unemployment line. “I was one of the first to get axed,” he said. “Why should they pay a cartoonist when they can get whatever they want for free off the Internet? But it ended up being the best thing that could have happened to me. Thanks to my severance pay and unemployment benefit I had a whole year to think calmly about my next step. Would I try my luck in advertising again or go after my dream in the world of comics?”

The second option prevailed, but he had no connections and nothing much of a reputation, even though “on the Internet you can have a presence everywhere.” He began sending his CV out to big publishing companies in the United States, starting with his favorite, Dark Horse. He didn’t expect a positive answer, but the company proposed a collaboration. Some two years later, with Dark Horse now on his resume, he started knocking on more doors.

“When I decided to approach Marvel, I just sent an e-mail saying ‘This is what I do. Are you interested?’ They said yes the third time I communicated with them. I was assigned to illustrate a Spiderman story called ‘The Arms of the Octopus.’ It was the summer of 2013,” remembers Dialynas.

It was more or less the same story with DC Comics, with Adventure Time and with the Teenage Mutant Ninja Turtles: “My greatest passion! I was 6 years old when the movie came out and I loved them.”

With Boom! Studios things went a lot differently, as its people came to him with an invitation to work together on the illustrations for “The Woods,” a series written by James Tynion IV, of Batman fame. “We were supposed to do 12 issues and I’m already on my 30th,” says Dialynas, adding that “2016 was particularly creative, with 15 issues and almost 300 pages of work.”

The series is coming to its end and the grand finale, Dialynas promises, will be “epic!”

What does it take to have a career in the US? What are employers looking for?

“Everyone in publishing abroad wants to know the following things: Are you passionate about your work? Are you available to work whenever you’re needed? Will you meet your deadlines? As simple as that,” explains the artist.
What is the comics scene like in Greece?

“It’s unlikely you’ll find Greek comics in a bookstore, though I’m hoping this will change over the next few years. Up until 2000 when we had the comics magazine 9 published by Eleftherotypia [newspaper], the scene flourished and we saw a lot of great talent emerging,” he says.

Can working as a comics artist provide a livelihood? “Yes, of course. And because the cost of living is so much lower in Greece than in New York, for example, a Greek comics artist working with American companies is in a very good place indeed.”

What would he tell a kid with the same passion he had? “That if you persevere, your dreams can come true.”

For more information about Michalis Dialynas and his work, visit www.woodencrown.com.

Strangers in a strange land