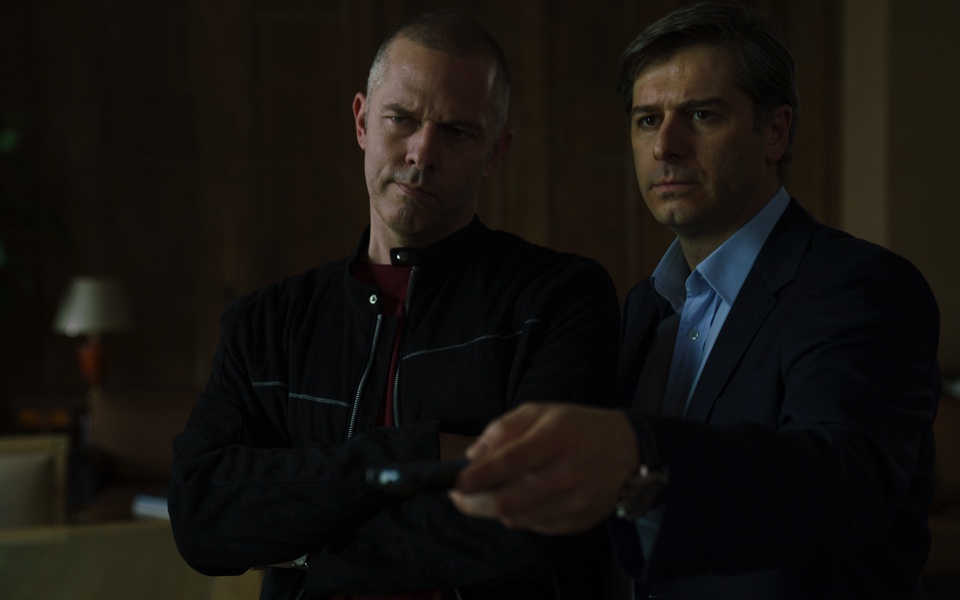 Alexandros Bourdoumis (right) as Alexis Tsipras and Christos Loulis as Yanis Varoufakis in a scene from the film. 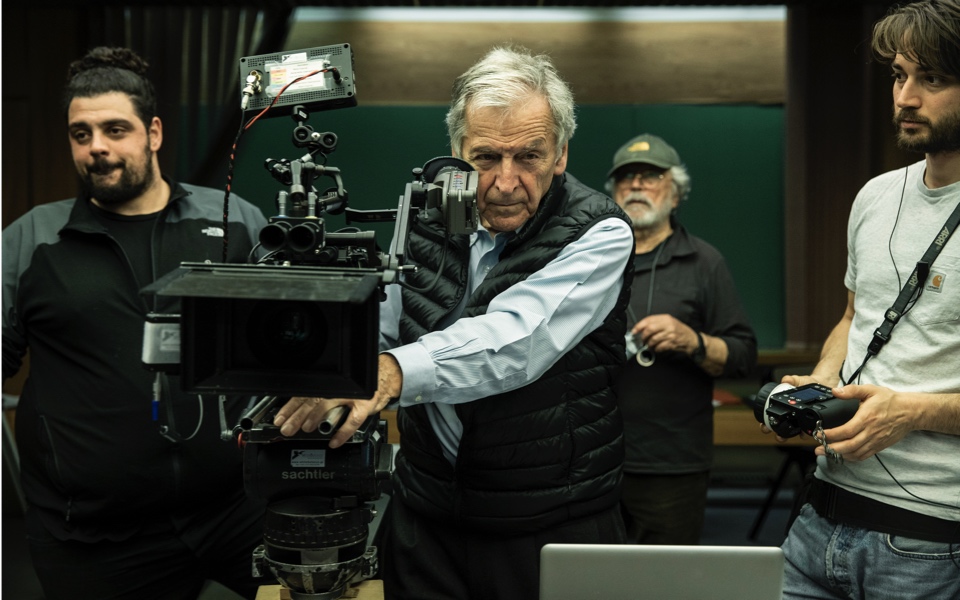 Greek-French auteur Costa-Gavras during shooting for what is his 19th film. 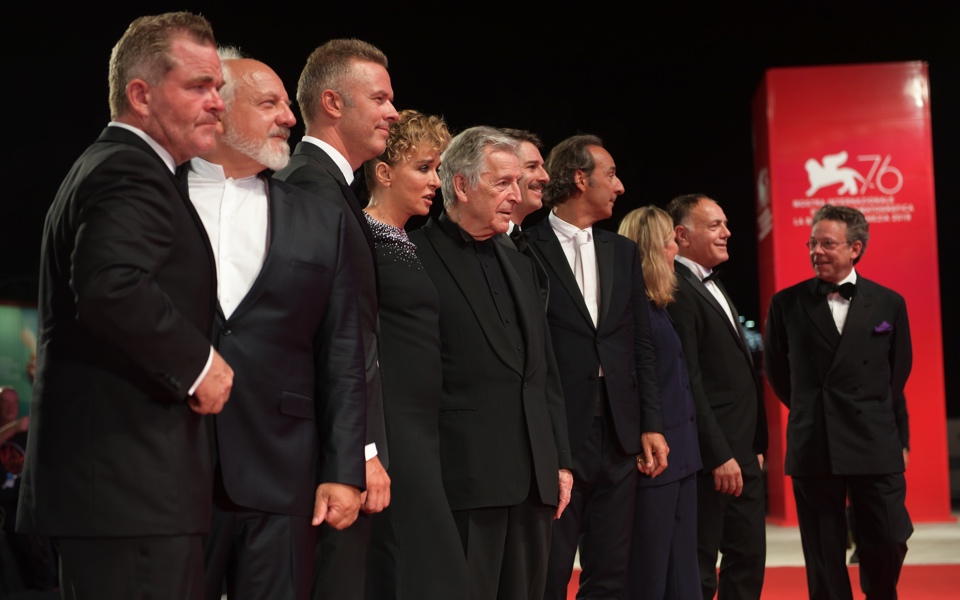 Costa-Gavras along with his cast and crew pose for photographers at the Cannes Film Festival, where the film premiered.
Aimilios Charbis
September 21, 2019 21.09.2019 • 17:00

Costa-Gavras sat patiently in one of the many lounges of the Hotel Excelsior on the Lido in Venice, taking questions from successive groups of three or four journalists. He looked tired, but also happy, smiling. I asked him if he’s ready for the things he’s bound to read and hear when his latest film, “Adults in the Room,” a drama based on former Greek finance minister Yanis Varoufakis’ controversial account of the white-knuckle negotiations with Greece’s creditors in the first half of 2015, opens in Athens next month. “But that’s why I do film,” was the Paris-based Greek filmmaker’s disarming response. “I am very curious to see the reactions in Greece and I’m hoping that they’ll be passionate. I know that a lot of people hate some of the characters being depicted and others love them. What we have here, though, is a film, a show.” The political drama had its international premiere at the Venice Film Festival at the start of the month, with its first Greek screening scheduled at the closing of the Athens International Film Festival on September 28.

Costa-Gavras often used the term “show” in our discussion and stressed that when he first met with Varoufakis to discuss the project, he underscored that he wouldn’t be making a historical film or a documentary, but “a show, a film that will excite emotions in the viewers.” Nevertheless, the end result is very close to the original book, apart from the final scene, where the last of then prime minister Alexis Tsipras’ marathon negotiations with the creditors is set to a bizarre “syrtaki” dance score by award-winning French composer Alexandre Desplat.

Alexandros Bourdoumis, who plays the former leftist leader, remembered the shooting of the scene as one of the most “intense” experiences he had during the project, second perhaps only to the day when he was given the role.

“Costa-Gavras and his wife [producer Michele Ray-Gavras] invited me to breakfast and suggested that I play one of the two main roles. It was the best breakfast I’ve ever had in my life,” said the actor, who joined Christos Loulis, playing Varoufakis, at the top of the cast list.

A wry smile played on his lips when I asked what it was like to relive the dramatic events of that time, which was just four years ago, from an insider’s perspective. “In 2015, my wife was pregnant with our second child, who was born on June 15, so you can imagine,” he said, referring to one of the toughest patches of the negotiations, when Greece’s continued membership in the eurozone hung in the balance. “I had a child, a mortgage, obligations; I think I aged 10 years that summer. What’s more, I don’t think I know a single person who didn’t have a very strong opinion one way or another. On set, between takes, we talked all about these things: ‘Do you remember that?’ ‘Where were you when such-and-such happened?’ It was most definitely a huge challenge to our professionalism.”

Why did Costa-Gavras decide to make us all relive those dramatic six months so soon after, when the memory is still quite raw? “It had to be now. I know it’s a very short time ago, but this is the right moment because we need to talk about Europe,” he said. “The way it handled the issue with Greece says a lot about present-day Europe, which took steps back under its last two presidents, [Jose Manuel] Barroso and [Jean-Claude] Juncker. It became interested only in the economy and allowed education, culture etc to slip. I describe the events in detail in the film; it’s not fiction. When, for example, the French minister says one thing to Yanis in private and then claims the exact opposite to the media moments later, it means something. And this is something that happened; there is no doubt.”

Needless to say, there has been a lot of public discussion concerning the filmmaker’s relationship with the firebrand economist, but Costa-Gavras is absolutely clear: “What we have in Varoufakis’ case is the definition of character assassination, and I believe that this is a decision that had been taken very early on. He also helped, of course, with that story in Paris Match and his eccentric style of dress,” the filmmaker said, referring to the former finance minister’s penchant for loud shirts and leather jackets, even in formal settings.

Varoufakis, the director added, was maligned “even more so perhaps because, apart from [then German finance minister Wolfgang] Schaeuble, he was the most knowledgeable person in the Eurogroup and was telling the others what needed to be done.”

For Christos Loulis who plays him, Varoufakis’ “tragedy” is that he is an idealist.

“I met Yanis and his wife shortly before filming began, when he invited me to his home, along with Costa-Gavras and his wife. Everyone else left eventually, and the two of us stayed up talking (and drinking) until 6 a.m. In my opinion, he is a passionate man who knows what he’s talking about. But he is also an ‘artist,’ with a mind focused on the ideal. I’m not saying that his head is in the clouds, but he’s part pragmatist, part dreamer, and that’s his tragedy,” said the actor. “What you see in public is absolutely real, there’s no acting. Personally, and even though I have never voted for him, he earned my respect when he resigned after understanding that he couldn’t see his ideas through.”

Costa-Gavras encouraged his actors to put something of themselves into their roles and not just try to copy the real characters, according to both Loulis and Bourdoumis.

“In my case, I tried to understand and to depict Alexis from a human perspective, which is what the director also does, rather than through his choices,” said Bourdoumis. “If you think about it, this man had all the facts before him and all the dilemmas, and had to make a lot of tough choices. That’s a lot of pressure…”

Cultural tourism on the rise on the Greek islands

Memories of an old-school projectionist