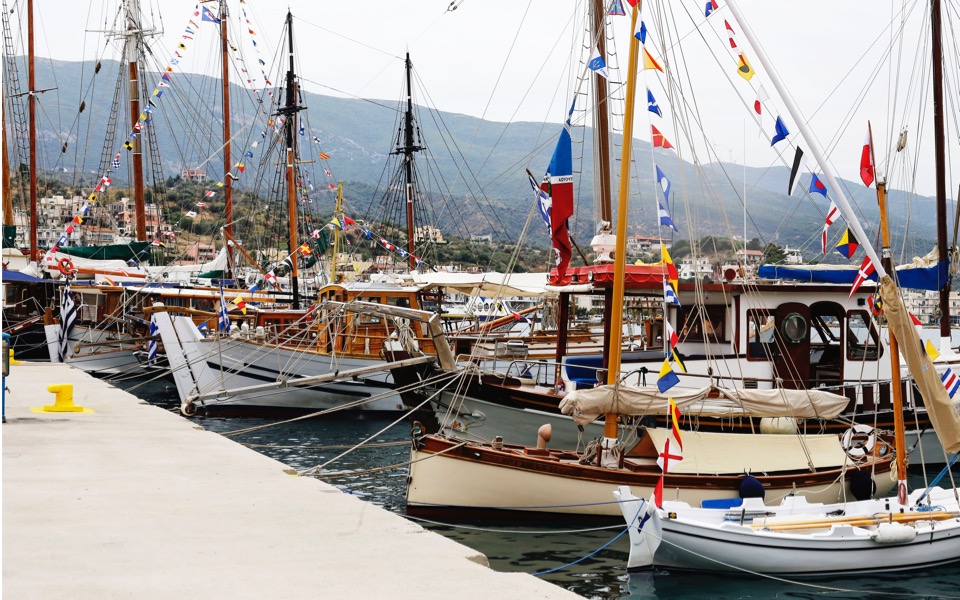 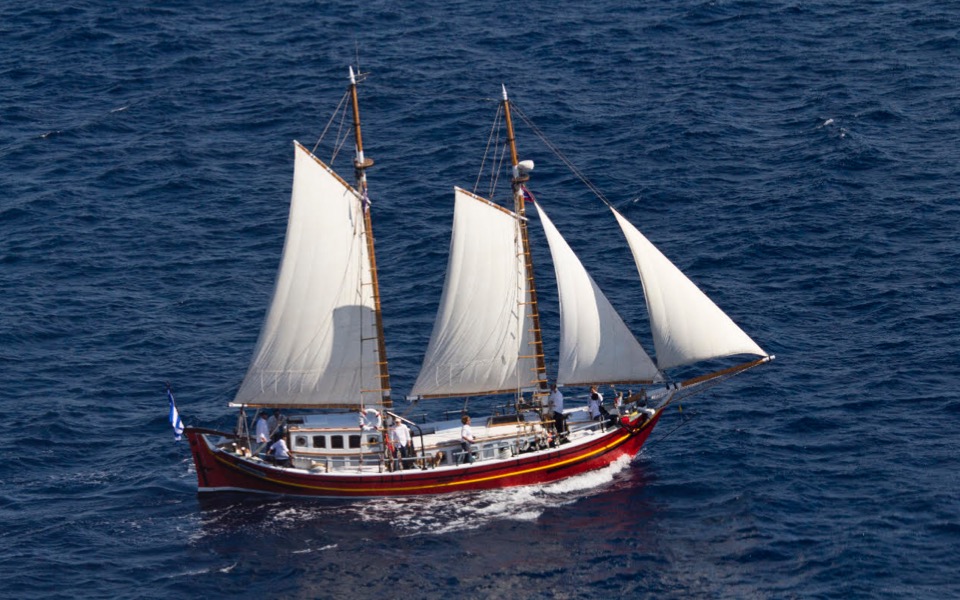 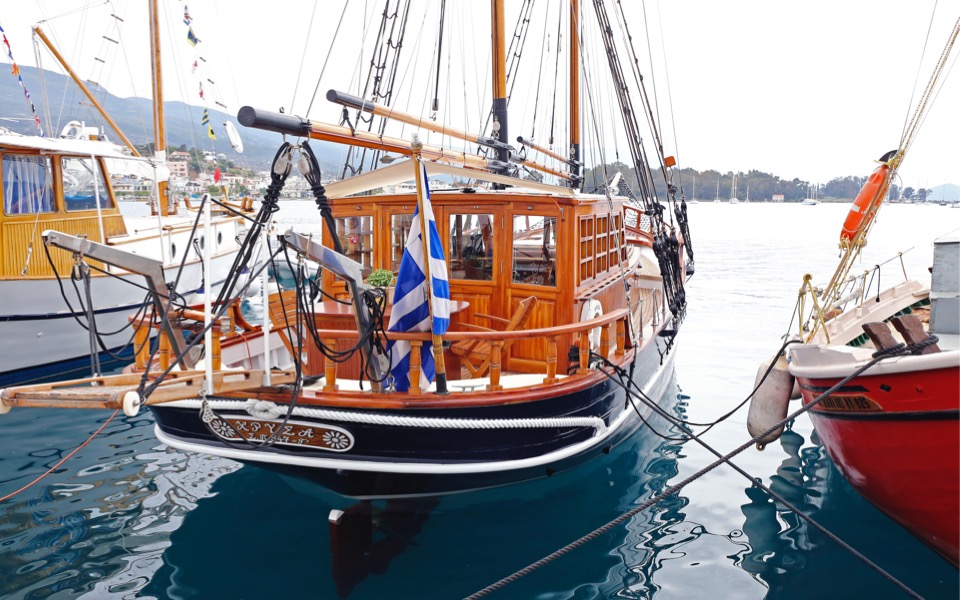 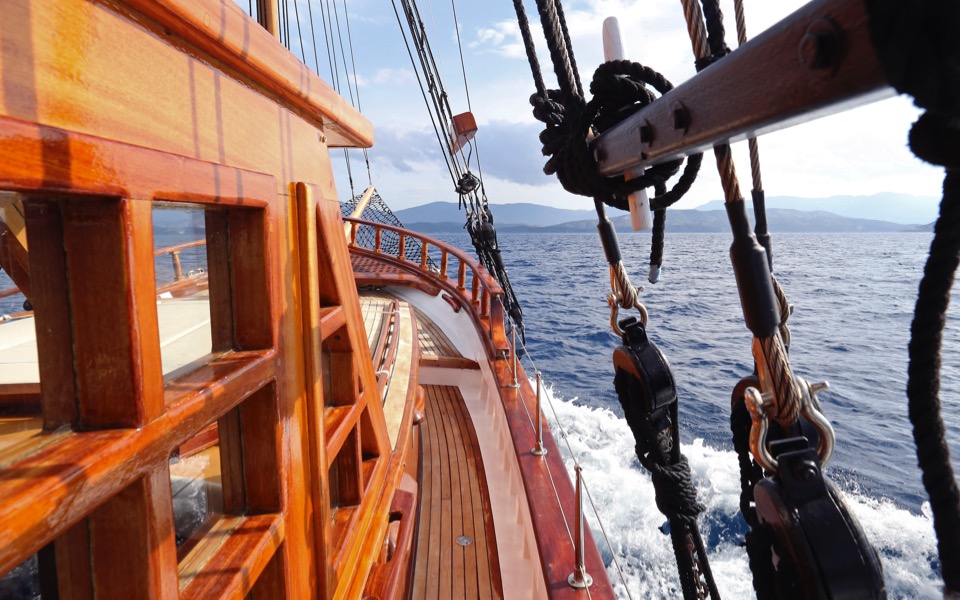 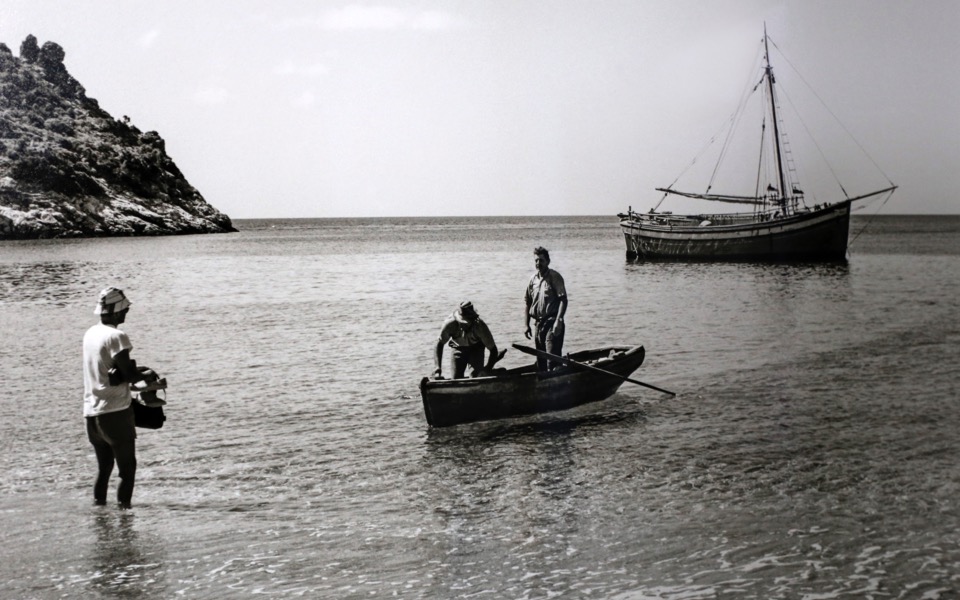 Greek caiques from the 1950s and 60s by American photographer Robert McCabe, shown at the Citronne Gallery on Poros last month. 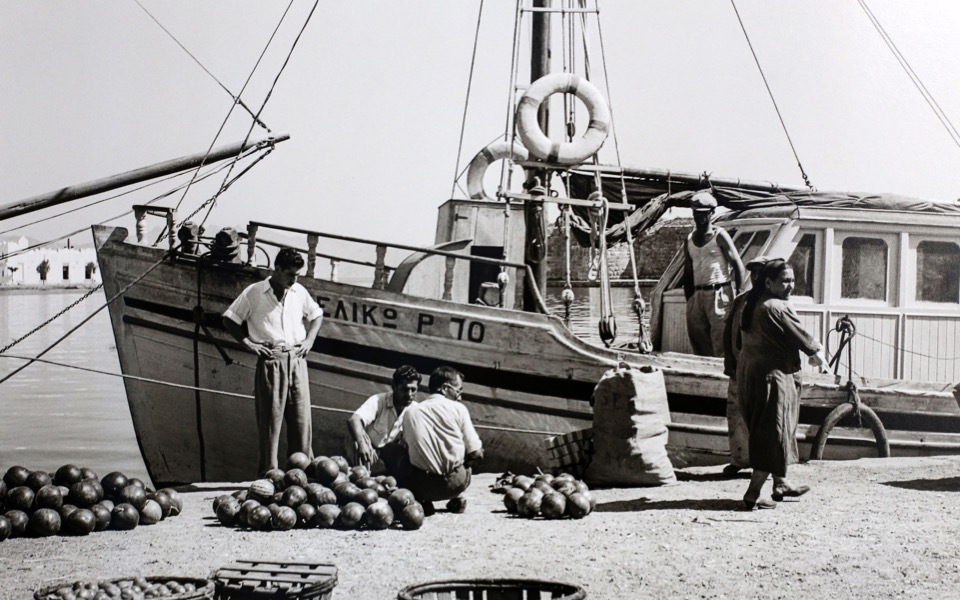 “I’ve learned all sorts of stories from my grandfather and other old-timers. Back when their fishing boats weren’t equipped with instruments for checking the weather, they had to read the sky to see when a storm was coming. When they saw it out on the horizon, they would go to stern, make the sign of the cross in the air with a knife and chant an incantation to ward off any evil threatening their boat. Once the storm began, they would talk to their boat, make it promises so it would take them safely back to land: a good boatyard, thorough maintenance, a new lick of paint. And they kept their word, because the wooden hull is like a person: It can hear. And when it’s being crushed by a bulldozer, it makes a sound like a death rattle.”

Yiannis Prasinos is standing at the tiller with his eyes fixed on the sea as he steers his caique, Chryssa, with effortless grace. After all, he did build her with his own hands. At 50, Prasinos must be the youngest marine carpenter in Greece today. He is the fourth generation to work in his family’s boatyard, joined to the sea at birth. Today, though, he carries a heavy burden: to salvage an art that is 2,500 years old and at threat of extinction. He faces the task of preserving secrets that have been passed down from the masterbuilder to the assistant and never committed to writing, techniques that have been tried and tested through the centuries to keep the boats afloat and strong enough to withstand the buffeting of the Aegean waves, the secret ritual for when to cut down a tree for wood (“In January, with a full moon, so it has all its juices”) and how it is hewn to form a mast.

Prasinos is the last narrator of a story that started in ancient times and was so wonderfully captured by 19th century novelist Alexandros Papadiamantis in “The Murderess” (I Fonissa), where the sea appears to one of the protagonists as though “embroidered or ornamented” from the streams of white left behind by the schooners, brigantines and caiques.

In a few years from now, books may be the only place to enjoy these colorful wooden boats as their numbers in the Aegean are dwindling. According to a survey by the Traditional Boat Association of Greece, of the 14,500 wooden boats that sailed the country’s seas 20 years ago (making it the biggest fishing fleet in Europe), 12,500 have been destroyed. The demolition began in 1996 with European Union regulations to prevent overfishing, which prompted thousands of Greek fishermen to hand in their licenses and agree to destroy their boats in exchange for subsidies. As the fleet dwindled, so too did the craftsmen. Today, there are just a handful of caulkers, riggers and sailmakers to be found, and what few traditional boatyards remain are doing battle to hold onto their spots in the country’s ports, eyed by bar and cafe owners with expansionist dreams.

Prasinos takes us from his home island of Salamina, just a few kilometers off the coast of Piraeus, to the nearby island of Poros for this year’s exhibition of traditional boats, organized by the association.

‘The wood is alive’

“A good marine carpenter needs to be able to dream of the entire boat he will build when he goes to bed at night. If this doesn’t happen, it will never get done. He also needs to respect the wood, because it’s alive. He shouldn’t hit and bore holes in it without reason. He must treat it well,” says Prasinos.

“A good craftsman never reproduces a keel. When he builds a boat he should have a barrel beside him in which to throw and burn the templates. Each boat is unique, which is why something is lost forever when it is destroyed,” says Prasinos. “Fishermen are leaving the profession because they can no longer feed their families. Imported fish are cheaper than Greek. I’ve seen a lot of people cry when their boat is being smashed by a bulldozer. I felt as though my hand was being cut off. I’ve seen caiques I built smashed up and I recognized every piece. I remember how much time and effort they took. I hope the state offers some financial incentives to help those who want to save even a single vessel. Many would want a boat like that, even if the maintenance is more expensive.”

We meet Panos Hasapis at the port. He’s just moored and is tinkering around Chryssopigi, a caique of the traditional kind built on the island of Hydra.

“I built her myself in early 2000. She has given my family and friends an immense amount of joy and is the last thing we would want to give up, even if we were at risk of losing our home,” he says. “The state should protect these wooden boats by offering incentives for salvaging them, not just for the pleasure of certain individuals but in order to safeguard the shipbuilding tradition that is, to a great degree, empirical. The skills will be lost if one generation of caique builders is allowed to go. Greece lost most of its merchant fleet in World War II, together with boats that were never rebuilt. Now we’re destroying the wooden boats ourselves. The day will come when we’ll have nothing pretty to see in the ports.”

One boat is missing from the exhibition even though it is considered one of the most beautiful and luckiest in the Aegean. Faneromeni was anchored in her permanent spot on an islet in the Gulf of Corinth, but her owner, Nikos Riginos, made the trip from Poros.

Riginos bought Faneromeni 30 years ago and has spent a lot of time and attention lovingly restoring her to her original 1945 form. “I was called a loon and a crank when I first bought her. But it was love at first sight and this caique became my life. The only solution is for the state to assign a safe harbor only for traditional wooden caiques where the owners don’t have to pay docking fees. It would bring together all the craftsmen of traditional boatbuilding. This happens in other countries where they also hold huge parades of the boats every year, which are hugely popular,” says Riginos.

His argument is supported by Nikos Kavalieros, the president of the Traditional Boat Association of Greece, an institution that is extremely active in the preservation of boats and awareness raising.

“The state bears a huge responsibility because the legislation could have been implemented differently, as it foresees using these boats for purposes other than commercial fishing,” he says. “They could be used for tours or even submerged so they can form a marine habitat. But the state is ignoring the crime being committed against them.”

It seems, however, that society is also indifferent. Why? The answer may be found in the wonderful photographs of American Robert McCabe of Greek caiques from the 1950s and 60s that were shown last month in an exhibition at the Citronne Gallery on Poros, the proceeds from which went toward the association: The boats and fishermen depicted express a part of the country’s history most people would like to forget, a chapter filled with toil and poverty.

“A boat must have three attributes: It must be beautiful, well-crafted and perform well at sea. If one is missing, so are the other two. And what’s the point of building an ugly boat, even if it is seaworthy?” Dinos Korakis, one of the oldest marine carpenters in Greece, said last year when Kathimerini visited him at his boatyard in Spetses.

He had been furious at the state for regulations restricting boatyards, even those that have been in the same spot for hundreds of years.

“They want to kick us out of this place, where we have our boatyards,” he had said at the time. “But the locations haven’t changes since Ottoman times. Our grandfathers and great grandfathers were also here. In the last few years, though, every so often, we have problems with the Port Authority and the state’s land service. The work we do is the hardest, it’s very fiddly. How will any young people want to come here and learn the craft when they’re being threatened with fines and law suits? How can anyone go on working with any kind of pleasure when they’re under threat of eviction?”

Greek-American business guru helps startups back in the homeland