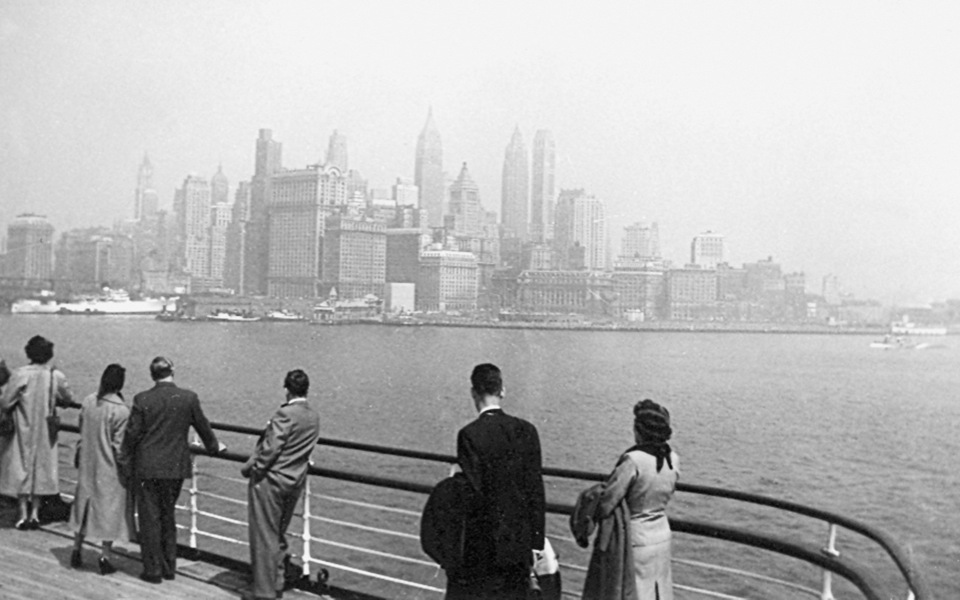 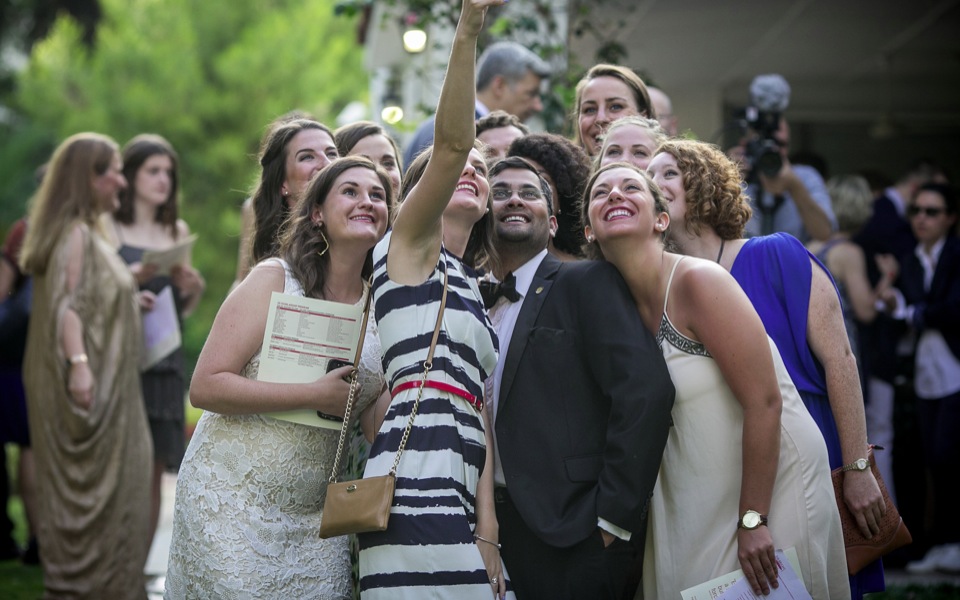 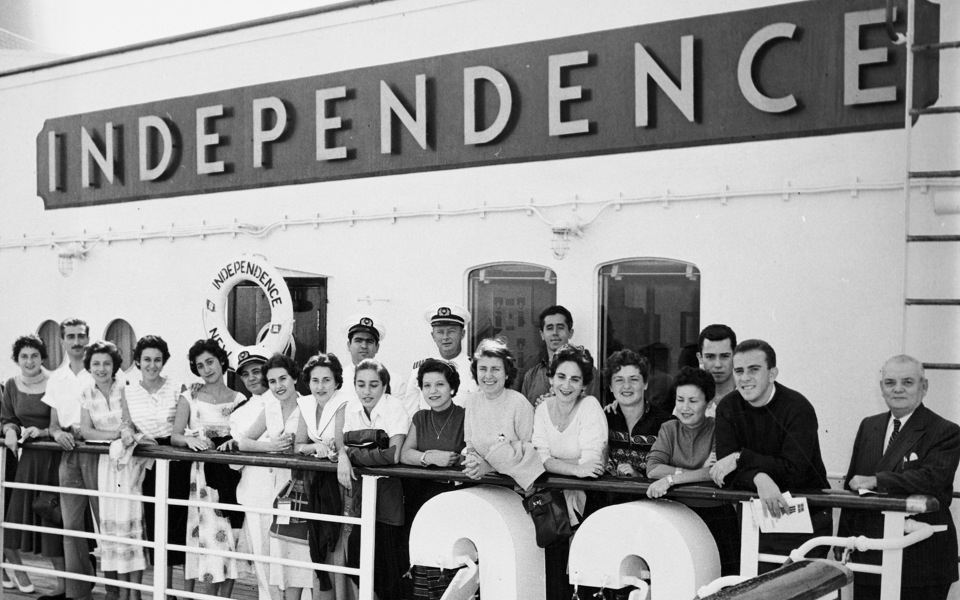 Out of the roughly 13 tropical storms that hit the Atlantic Ocean in 1955, one rocked the Independence ocean liner. “For about three days I was unable to leave my cabin,” said Rita Pipinopoulou-Panourgia, who, back then was a young student traveling to the United States on a Fulbright Foundation scholarship. “My friends said to me: ‘Rita don't go out. The waves are as high as Lycabettus.’ Thankfully, we were fortunate,” she added. Indeed, nine days later the ocean liner and the Greek Fulbright fellows arrived in New York on September 12, 1955.

The young woman, who had traveled alone on an overnight train from her native Larissa in central Greece to reach the capital in time for the foundation's scholarship exam, ended up spending a year at the University of Kansas, where she studied journalism. She also gained invaluable experience traveling to other US cities during her year abroad.

“Fulbright broadened my horizons. My entire life became identified with the foundation, in one way or another,” Pipinopoulou-Panourgia told Kathimerini.

Eventually, she ended up working at the Fulbright Foundation in Greece from 1963 to 1974, when she was forced to go on a “break” after being arrested by the military dictatorship. “My American colleagues used their poor Greek to forward messages of solidarity,” she recalled.

Senator J. William Fulbright of Arkansas, the foundation's founder, fought for her release, she noted, as she presented a small, well-arranged pile of correspondence. Nevertheless, her refusal to collaborate with the colonels landed her at the regime's military police prison known as EAT/ESA, followed by a period of exile on the island of Kythera.

“I met the senator at the foundation's 30-year anniversary. He was a true philhellene,” she added.

What has defined the success of the Fulbright Foundation's Greek program?

“The idea of stability and credibility, the fact that the foundation never stopped operating, not even for a day, that scholarships have been awarded every single year, even during tough times,” said Artemis Zenetou, executive director of Fulbright Greece.

Among a selection of the foundation's publications on display at the main hall, one coffee-table book was dedicated to Kythera, the island where Panourgia lived in exile.

“Fulbright fellow Christina Williamson spent a year on the island taking photos. She opted to focus on those who chose to stay on the island,” said Zenetou as she presented photos by Williamson hanging on the walls. The artist, along with fellow Fulbrighters, is taking part in the Greek program's “Art Supports Education” initiative, where works are sold at lower prices to those wishing to make donations.

While browsing an edition of the foundation's historical archives in Athens and observing some of the names of its distinguished fellows – which include Umberto Eco, Javier Solana, Karolos Koun and Giorgos Seferis, to name but a few – the discussion turned to the broadening of the foundation's collaborations with Greek and US educational institutions, as well as the interest shown by American fellows toward modern Greece, alongside classical studies and the humanities.

“You can judge a country by the way it invests in education,” noted Zenetou.

Since its inception, the Greek program has awarded more than 5,000 scholarships to Greek and American students, teachers, artists and researchers. In the last decade, the foundation has also developed several interesting programs, such as “Train the Trainers,” which is based on the idea of fellows sharing the knowledge they acquire, as well as a collaboration with the Benaki Museum, visits by US teachers in primary and secondary education, aiming to introduce them to Greece and its culture, projects with Turkey and Balkan countries, and shorter programs addressed to PhD candidates and other academics.

“We are always on the go. We are never complacent. We are constantly looking at how to keep up to speed and live up to the needs of the times,” she added, stressing the fact that even during the Greek financial crisis the program's scholarships did not fall below the 50-per-year mark.

Speaking on the ongoing financial crisis, James C. Wright, director of the American School of Classical Studies at Athens and board member of the Fulbright Foundation in Greece, noted that he had received yet another email regarding thoughts by the US Congress about reducing the educational exchange program's funding, which is also assisted by private donations.

“Every time this kind of email comes through, thousands of fellows across the world jump into action and start putting on the pressure regarding the program's funding, because it is important to maintain America's cultural and financial ties with the rest of the world,” noted Wright, adding that government officials are usually quick to recognize the transatlantic program's value.

A Fulbright grant brought Wright and his family to Athens in 1985, at a time when he was an associate professor at Pennsylvania's Bryn Mawr College. While he had visited Greece before, the scholarship allowed him to get to know the Greek way of life on a deeper level as well as strengthen ties with his Greek colleagues.

“Perhaps I would never have become the director of the American School of Classical Studies at Athens had I not stayed in Greece at the time. I remember delivering my first scientific lecture in Greek that year. The research work I carried out back then [Editor's note: at the archaeological site of Nemea, in the Peloponnese] contributed to my promotion to the rank of full professor.”

Consequently, it is not that difficult for Wright to argue in favor of the exchange program and its further development. “When I won the scholarship I was under the impression that the program was mainly oriented toward academic research and, of course, as an academic, I'm in favor of this. However, when I came across artists, writers and undergraduates who were also fellows, I realized that when you develop contacts through broader cultural and sociopolitical activities you end up forging closer ties, as opposed to viewing the program through a solely academic research framework,” he noted.

Understanding different cultures, the values and traditions of each country through education as a means of maintaining world peace lay at the core of Senator Fulbright's initiative for the development of a student exchange program between the US and the rest of the world in 1946. Since the first fellows boarded ocean liners headed to the US, Europe, Africa and Asia, the foundation has granted about 360,000 fellowships. Operating in 155 countries, the organization is constantly developing dialogue and communication among those who could be shaping tomorrow's world.

The exchange program resembles a relay marathon, noted Zenetou as she described the exchanges of knowledge and experiences between fellows. Despite the ongoing crisis, which is adding hurdles, Zenetou is optimistic both in terms of “friends raising,” as she likes to refer to the foundation's donors, as well as its future course.

After all, when she returned to Greece in 2001 as the the first woman and non-US citizen set to take over the Greek program, she marked her return by running the Athens Marathon with a group of friends. She completed the race without any problems.

“It's not a matter of speed, but about how you organize your energy to reach your goal,” she concluded.

Child refugees in Greece have been out of school for 1.5 years on average

As Greek community in Romania grows, education becomes a concern