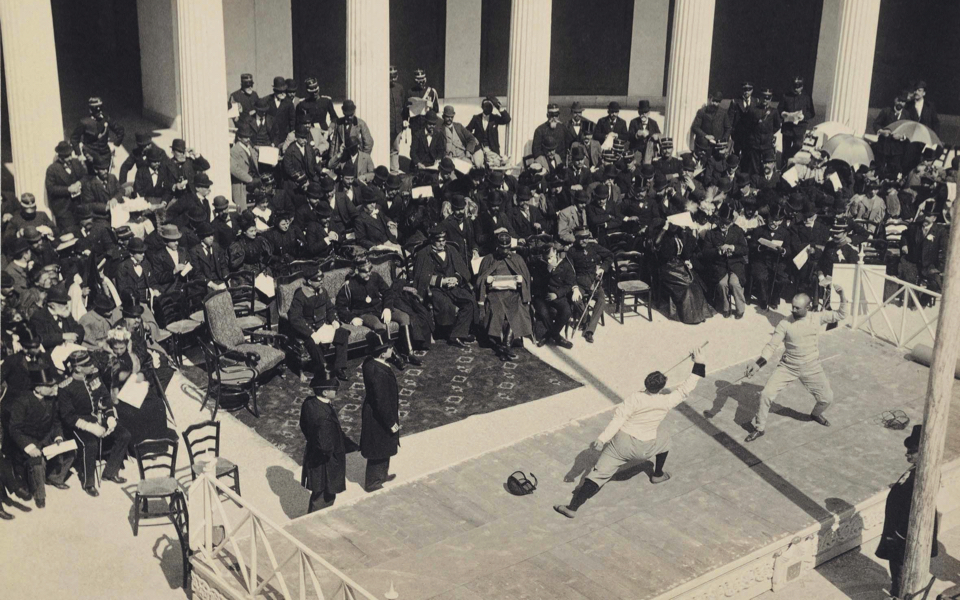 Fencing at the 1896 Summer Olympics. 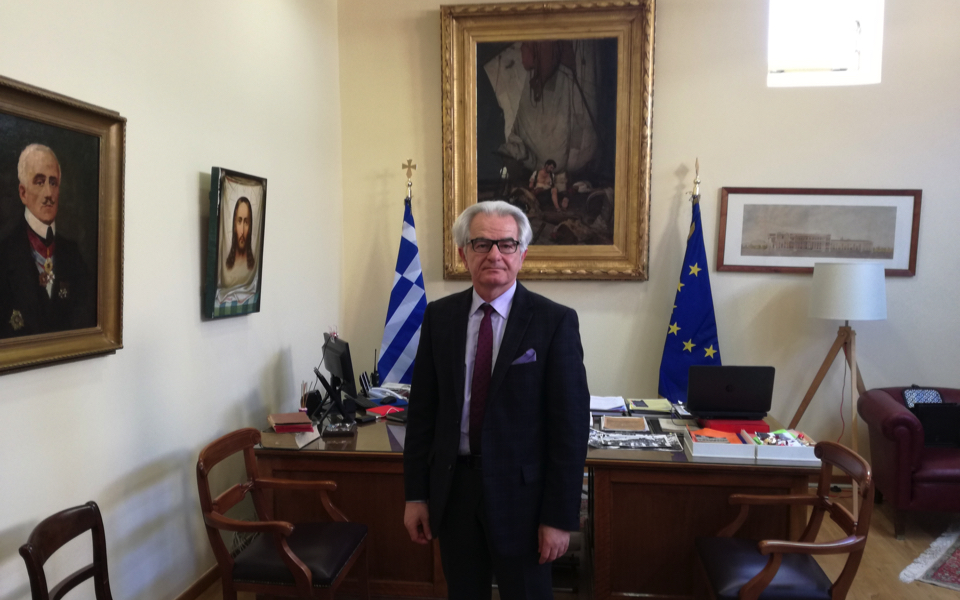 The chairman of the Olympia and Bequests Committee’s board, which administers the Zappeion Hall, Giorgos Christou. A portrait of Evangelos Zappas is seen at left.
Nikos Konstandaras
July 27, 2017 27.07.2017 • 12:50

For close to 130 years since its completion in 1888, the elegant Zappeion Hall has stood at the center of Athens’s turbulent history, through peace and war, development and depression. It has been an integral link with the Olympic Movement, from the 1850s and the first efforts to revive the games up to 2004, when Athens last hosted the Summer Games. Now, the organization that operates the building and its splendid grounds is working to revive the wishes of the great benefactor Evangelos Zappas, who had dreamed of reviving the Olympic Games and paid for the first modern Olympics in 1859, long before the first official games were staged in Athens in 1896, when the Zappeion Hall hosted the fencing event.

Last year, the new chairman of the Olympia and Bequests Committee’s board, which administers the site, Giorgos Christou, announced an initiative aimed at placing the Zappeion Hall back where Zappas had imagined it when he bequeathed the money for the construction of the building, for the revival of the games and for the showcasing of Greece’s art and industry. The “Cultural Autumn-Winter 2016-2017” was marked by the granting of an award last September to Ark of the World (Kivotos), a nonprofit organization that Father Antonios, a young Orthodox priest, formed in 1998 to take care of poor Greek and immigrant street children, mostly from single-parent families.

The ceremony took place on September 30, a day commemorating Greece’s national benefactors. More awards will be granted this coming October. According to the Olympia and Bequests Committee board, “golden wreaths will be awarded, in accordance with the wish of Evangelos Zappas, to Greeks who have excelled and made Greece proud, as well as to organizations and agencies, institutions and foundations for their long-term contribution to Greek society.” Winners will be selected in the categories of politics and social contribution, economy and business, science and letters, culture and the arts and, of course, sports. The winners have not yet been decided.

The Zappeion Hall and its landscaped grounds (which include gardens consisting of 8.3 hectares of flower beds and parkland and 240 square meters of inner courtyards) will host celebrations based on the ancient idea of the Panathenaic Festival, the board said. All of the activities “constitute the revival and continuation of the ‘Olympics’ (1859, 1870, 1875, 1889) and the ‘Zappeion Games’ (1859, 1870, 1875) according to Evangelos Zappas’s will.” Their aim was “encouraging the fine arts and exhibition of Greek products,” the board said, quoting the benefactor’s wish.

Zappas was born in Epirus in 1800, and, after fighting in the war of liberation against the Ottoman Empire that began in 1821, made his fortune in Romania. In the 1850s, when the issue of reviving ancient ceremonies and contests was debated in the newly independent Greece, the poet Panagiotis Soutsos inspired Zappas, who, as the Zappeion website says, “essentially introduced the concept of establishing parallel cultural activities and exhibitions modeled on the first world fair in London in 1851.”

“Zappas drafted a memorandum proposing that a new institution be established that would help Greece keep pace with the industrial revolution. The memorandum was sent early in 1856 setting forth the proposal that the contests be organized in Athens on March 25, 1857,” the website says. “Zappas would bear the cost of this event, as well as that of constructing an Olympic building to house an exhibition of samples of Greek art and industry. The building would also function as a museum displaying antiquities. To expedite this plan, he immediately sent 2,000 Austrian florins to cover the costs of the First Olympiad, which was also called the First Zappeian Olympiad.” Zappas did not live to see the Zappeion Hall. He died in 1865. Construction began in 1874 and the neoclassical building was completed in 1888. It was designed by Danish architect Theophil Hansen, who is known also for the Parliament Building in Vienna and Athens’s iconic Hotel Grande Bretagne.

From the beginning, the Zappeion was at the center of sports and cultural events, of Greece’s rocky history. Aside from hosting the fencing event of the 1896 Olympics, the building was used as the Olympic Village in the 1906 Games. From 1936 and for the next 40 years, it housed the country’s state radio station. In 1940 it was turned into a hospital and in 1941 it was commandeered by German occupation forces, serving first as a storehouse and later as a barracks. It was bombed in 1944. After the war, there was talk of demolishing the building but, fortunately, it was renovated in 1960. Its latest renovation was in 2004, for the Olympic Games on their return to Athens.

One of the most important events that the Zappeion Hall has hosted in its long history was the signing of the Accession Deed in May 1979 which opened the way for Greece to become a member of what is now the European Union two years later. The building now serves as a conference and exhibition center. It remains integrally linked to the Olympic movement but also to the spirit of freedom, culture and entrepreneurship that the great benefactor Evangelos Zappas wanted to nurture among his compatriots.

Samos honored with a European Diploma

The day after for refugee NGOs on Greece’s islands

Meet the Greeks who call Mount Olympus their spiritual home