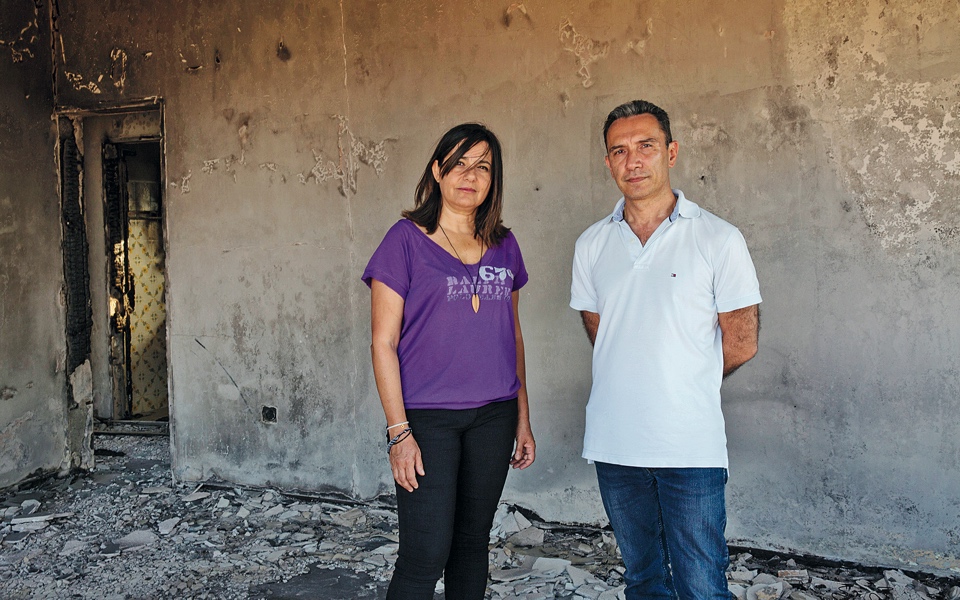 Volunteers Marina Karyda and Alexis Andronopoulos. ‘As soon as they were discharged from hospital, they were treated as though they were going home just like everyone else,’ Karyda says about the patients, lamenting the absence of a proper response from the authorities to their needs. ‘But their lives had changed completely. They had awful scars all over their bodies and were out of work. Some even rely on charities to cover their rent.’ 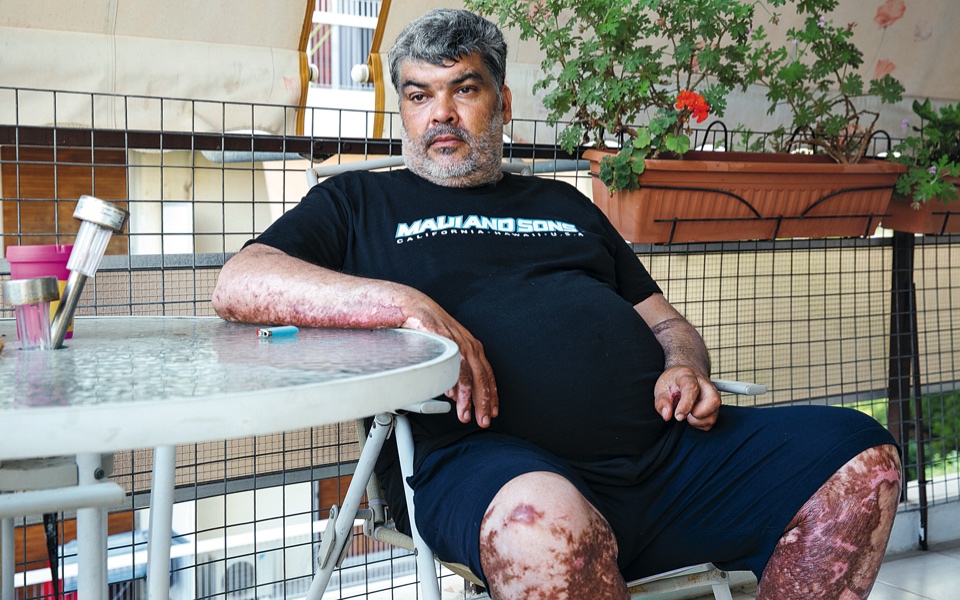 Filippis at the apartment where he has lived since being discharged from hospital. [Alexia Tsangari] 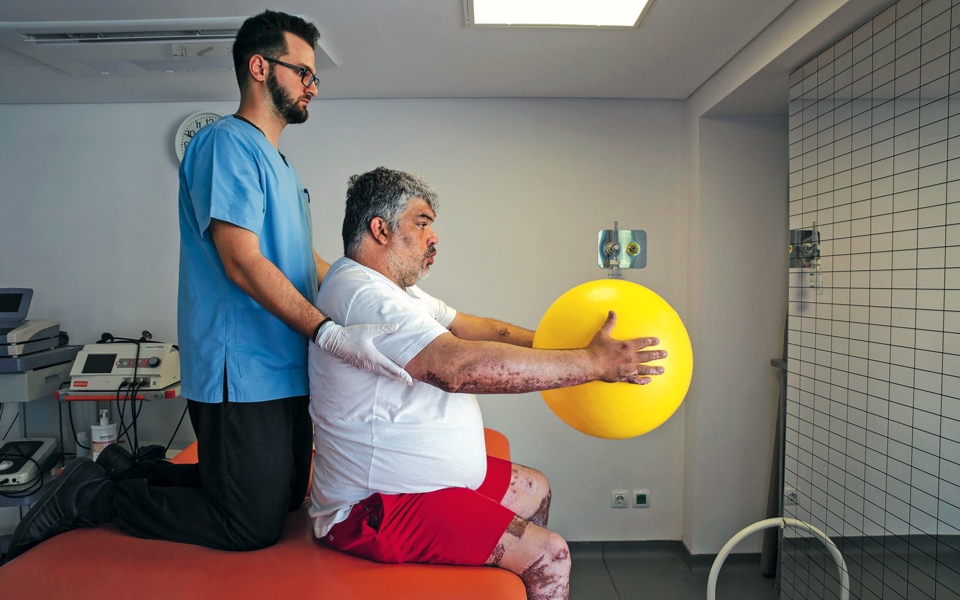 Dimitris Filippis undergoes treatment at the Theseus Rehabilitation Center. He has already had 30 treatments and will need at least as many more. [Alexia Tsangari]
Yiannis Papadopoulos
July 24, 2019 24.07.2019 • 16:08

Dimitris Filippis spent 78 days cut off from the world. After waking up from a medically induced coma, the tip of a cypress tree was the only thing he could see from the window of his room at Evangelismos Hospital in Athens. He would stare at it for hours, wondering what else was “out there,” unable to move. Recovering from horrific burns and with extensive muscle atrophy, he had to learn how to sit up again. Nurses would stabilize his core with pillows, but he’d collapse as soon as they were removed. Nevertheless, he was confident of being able to walk again quite quickly. Two burly nursing attendants were there to prop him up at his first attempt. He used every ounce of strength he could muster, but in vain. He was exhausted in less than a minute.

A few weeks later he was able to take three steps, all the way to the window of his new room on the hospital’s 10th floor. Today, a year after he was injured in the deadly fire that struck eastern Attica on July 23, 2018, Filippis’ tribulations are far from over.

Filippis is one of 58 burn victims who spent more than 48 hours at an Attica hospital in the wake of the wildfires, and despite the magnitude of the destruction, the state machine proved itself completely unprepared to help those people recover once they were discharged.

After leaving Evangelismos, Filippis moved into his mother-in-law’s house, where every effort had been made to ensure his comfort: a second mattress on the bed to make getting up easier; additional cushions on the sofa; a special toilet seat and a stool in the bathroom where he could wash himself without having to climb into the tub.

Yet every small annoyance could become torture, especially the itching as his skin healed. “First it’s your arm, then your leg, then your entire body is itching. Moisture makes you itch, the smallest amount of sweat is like you’re burning up,” he tells Kathimerini. Apart from medicinal creams that he has to apply on his skin every day, he also wears compression pads and silicone gel sheets to lessen the scarring. He can now move his right arm properly, but the fingers of his left hand are still balled into a fist. His lungs have also sustained damage. “Everything inside me has been through the mill. Veins, tendons, everything has been burned,” he says.

Despite the progress he has made, getting back to work as a bronzesmith is still a long way off.

Kathimerini recently followed Filippis to the Theseus Rehabilitation Center on Syngrou Avenue. He has already had 30 treatments and will need at least as many more.

“He could not function when he came to us. He couldn’t walk and he was in pain. He had all sorts of musculoskeletal problems that prevented his joints from working properly. He was a scared man, but he was also determined to live,” remembers Antonis Doukas, the supervising physical therapist at Theseus.

They set small, achievable goals and did exercises in a space designed to simulate situations at home.

Doukas remembers that Filippis was very quiet and reserved at first. “He became happier as we started to achieve the goals we set,” he says, adding that he observed different stages in his and other burn victims’ psychological recovery.

“At first they seem indifferent to the event, as though it never happened. You wonder how it’s possible. Don’t they care? But it’s just a defense mechanism. Then they take the psychological plunge and start talking about what happened,” says Doukas.

“We didn’t hear a single siren, a horn, a bell, anything,” says 53-year-old Mari Papachristopoulou as she sits in an Athens apartment remembering July 23 last year. “Talking about it is better,” she says.

Her daughter Marianthi Handrinou, 19, sits beside her.

Both are survivors of the Mati fire, their scars still visible on the bare parts of their bodies. “We hadn’t realized how badly we were burned. We couldn’t feel the pain. I don’t know if it was just the shock taking over. But my entire back was burned and so are the backs of our legs,” says Papachristopoulou.

Running from the fire

They ran out of their home, just 70 meters from the coastal Poseidonos Avenue, at the last minute, when the fire started to engulf the pine trees in the surrounding properties. They ran to the sea as fast as they could. They spent hours in the water, badly injured, exhausted and terribly thirsty. When a small bottle of water they’d grabbed on their way out finished, they started drinking the seawater.

They remember being saved by Andreas Traintafyllidis, a volunteer who helped get them safely to the Ramada Hotel, where a triage center had been set up. They will also never forget the help and support they received later from the doctors and nurses at the Thriasio Hospital’s Latsis Burns Unit, where they spent the next 47 days.

“The next day, when the hospital was on emergency duty, 15 more cases were brought in from Mati. Some didn’t make it,” says Papachristopoulou.

“You run to save yourself, telling yourself that you’re about to die the worst death there is,” says Filippis, who became trapped in his home after deciding to take a few moments to notify friends and family in the area that the fire had reached the town. He wouldn’t have been able to live with himself if he hadn’t warned them, he says.

Antonis Kyriakopoulos, one of the attending plastic surgeons at Evangelos, had clocked off from the morning shift on July 23, 2018, hearing the news about another wildfire that had started earlier in Kineta, west of Athens, on the same day. At home later that night, he got a call from his supervisor, Giorgos Harkiolakis, to come back in and help the other attending plastic surgeon, Maria Kotrotsiou, who was on call, deal with an influx of 45 burn victims from Mati. What he encountered resembled scenes from a war zone. Three attending and three interns, along with other medics and nurses, were struggling to cope. Triage took 90 minutes and the doctors knew who was in serious danger, who needed to be transferred to another hospital and who could be sent home after receiving first aid.

“The majority had sustained burns on the back of their bodies, arms and legs exposed by T-shirts and shorts. Most had not been burned by the actual fire, but by the heat from the fire, which reached 400 to 500 degrees Celsius,” says Kyriakopoulos.

In the wake of the wildfires, the Mati Residents’ Coordination Committee focused its efforts on helping burn victims. First, however, it had to find them and the authorities were not forthcoming with that information, citing privacy rules. Volunteers were set out to check all the hospitals in the Attica area to track down the 58 individuals who had suffered the worst injuries. Of them, 17 died in hospital over the following days and weeks.

“They were like mummies, wrapped up from head to toe. They needed someone by their side at all times and that is what we tried to do,” says volunteer Alexis Andronopoulos.

Representatives of the team met with Health Ministry officials on several occasions, calling for action to help patients who had to pay out of their own pockets to have 24-hour nursing in hospital and at-home care after they were discharged. They asked that the victims be provided with free physical therapy and a stipend of 6,000 euros. Nothing happened.

“They spent that money while they were in hospital; they should have gotten it,” says Andronopoulos.

Doctors who treated the Mati burn victims knew that they were looking at months of physical therapy and treatments. Kyriakopoulos said that his department sent an email to the relevant officials at the country’s main state healthcare provider, EOPYY, on September 4, asking that the plastic surgeons be allowed to sign orders for free physical therapy treatment, a process that is normally under the exclusive jurisdiction of orthopedic doctors. They got no answer.

Under the EOPYY regulations, Filippis and other patients were only entitled to 20 physical therapy sessions for free, nowhere near what they needed. Some patients were able to extend their stay in hospital longer so that they got the treatment they needed there.

But it took the volunteers to properly address the problem, as well as help from the head of the First Attica Regional Health Authority, Ioanna Diamantopoulou, who helped them cut through a lot of red tape. The Latsis Foundation offered to pay for the Mati patients’ treatments at Theseus, while also covering the cost of some specialized equipment. But the expensive creams and silicone gels have to be paid for by the victims themselves.

“As soon as they were discharged from hospital, they were treated as though they were going home just like everyone else,” says Marina Karyda, another volunteer, lamenting the absence of a proper response from the authorities to these patients’ needs. “But their lives had changed completely. They had awful scars all over their bodies and were out of work. Some even rely on charities to cover their rent.”

The process of evaluating the Mati burn victims and their entitlement to a disability pension has still not been completed. Filippis says the damage to his lungs was dismissed as “shortness of breath” by the experts and that he is appealing the decision.

For some it will be at least another six months before their injuries and scars can be assessed and plastic surgery considered. Until then, Filippis is facing yet another difficult procedure to help straighten the fingers on his left hand with implants. He is thankful for all the doctors and volunteers that have stood by him.

“These people did what the state should have done from the very first day,” he says.

Filippis may be walking again, but more than three hours of sleep a night remains elusive as memories of the fire and its aftermath still keep him awake.

How should we respond to children’s questions after the deadly wildfires?

Fire fears mount ahead of summer