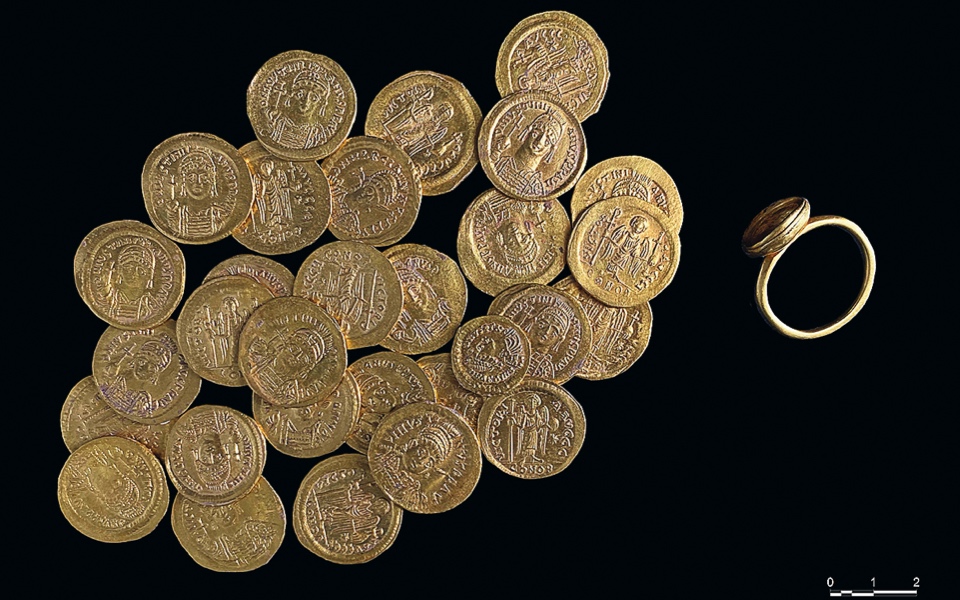 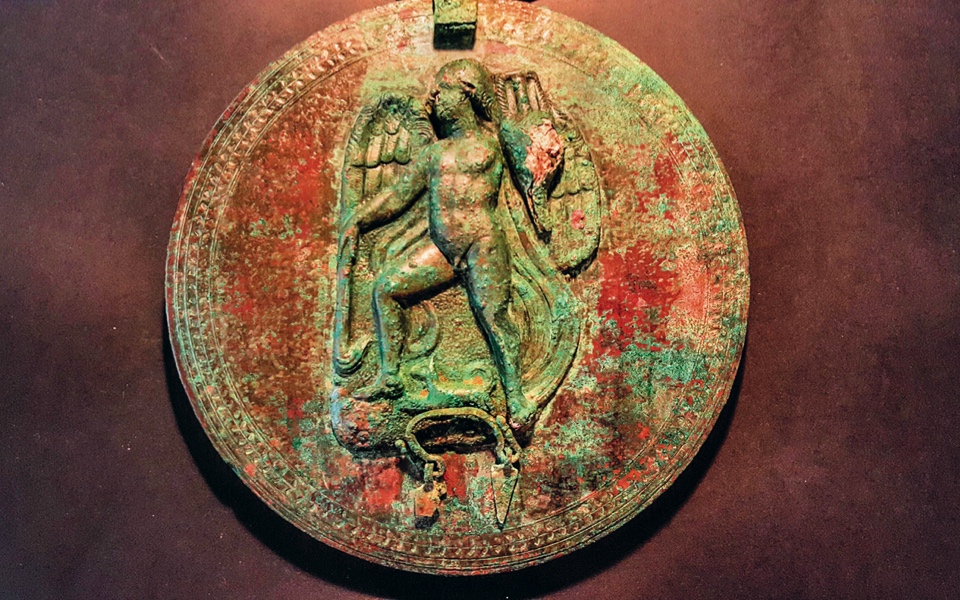 A mirror decorated with a relief of Eros, the god of love. 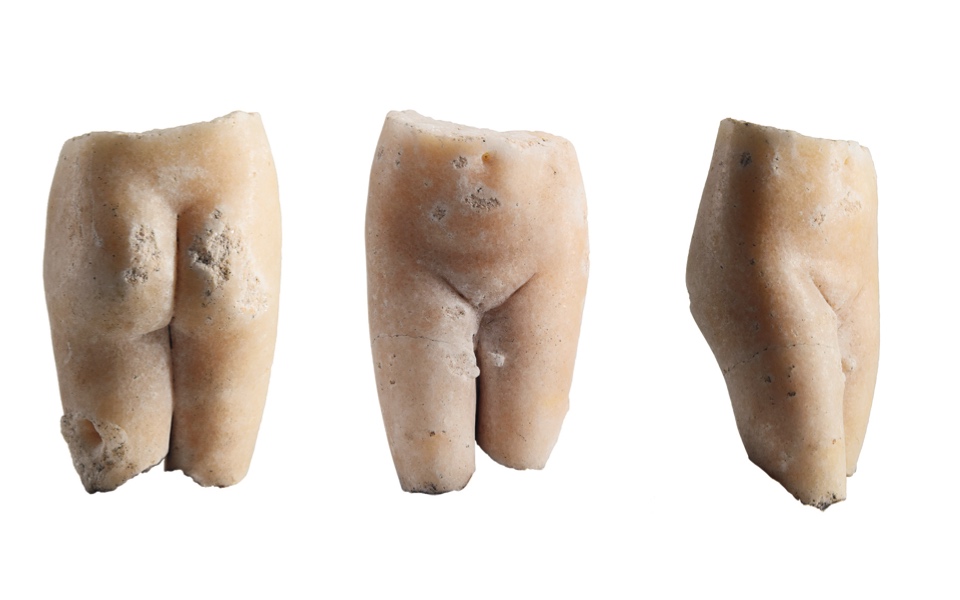 The broader vicinity of Tenea in southern Corinth has always been of interest to archaeologists, but also to antiquities smugglers. The Kouros of Tenea, for example, is a masterpiece of Hellenistic sculpture that has been at a Munich museum since 1854 after being illegally taken out of the newly established Greek state. Artifacts from the site can also be found in Berlin and in private German collections, and even in Boston in the United States.

Yet the place where Oedipus is fabled to have grown up and Agamemnon to have settled prisoners from Troy to guard the road from Mycenae to Argos has been yielding new treasures over the past seven years that the Culture Ministry has been carrying out excavations of the ancient city, under the supervision of Dr Elena Korka, confirming the city’s power and status.

Korka remembers the discovery in 1984 – when she was a young archaeologist at the Ephorate of Argolida and Corinth – that got the ball rolling in modern times. It was an Archaic sarcophagus with a painting on the interior, the “only example of monumental painting we have in Greece from the Classical Archaic years.” Its discovery was also a clue to the existence of Tenea, a city that had existed only in myth and excited searches by 18th and 19th century travelers and later Greece’s Archaeological Service.

“I had requested an excavation, but the service was so overwhelmed it was not possible. It eventually began in 2013, as soon as I was able to find the resources and a team, everything needed for a systematic study,” Korka tells Kathimerini.

The excavation started in the area where the sarcophagus was discovered and yielded an Archaic cemetery with later Hellenistic graves as well. “All the evidence, the funerary offerings and skeletal remains, pointed to them belonging to nobility,” says Korka.

Offerings tended to be sparse in Archaic times, she explains, so the discovery of bronze bottles and other valuable objects indicated the presence of significant wealth. One grave, belonging to a child, contained 55 vessels, something Korka describes as “unheard of at the time.” The shapes of the vessels were also distinctive and could not be found anywhere in the bibliography.

“It is a major research challenge because it is a new city that is coming to light, with many new elements and unique objects. All of the graves were richly endowed; even the Hellenistic one found among the sarcophaguses is remarkable. The two skeletons buried there belong to young individuals (soldiers or mercenaries), whose obol for Charon were Ptolemaic coins, never before seen in a burial. They were also rare in the northeastern Peloponnese,” says Korka.

The area was always rich in finds and its place in mythology captivated the imagination of professional and amateur archaeologists alike. Indeed, when Greece acquired an archaeological service for the first time following its independence, Tenea became one of its earliest projects thanks to the artistry of the relics found there.

“Many finds from Tenea are in German museums today and we know from the Ross excavations that there was looting,” says Korka, referring to the service’s first director, Ludwig Ross. She draws attention to the case of the kouros that was looted in 1854 by an Austrian diplomat who was also a renowned antiquities thief. “Hearing about the sculpture, he acquired it and managed to smuggle it out, but was unable to dispose of it as he had planned, so he sold it to the Munich museum,” says Korka, stressing that this was not the only such case, by far.

The search for the main part of the city led the archaeologists to locate another part of the cemetery and bring to light a Roman mausoleum.

“It had been looted, but a large number of Roman burials were found beneath and around it, all of them richly endowed with vessels, jewelry and glass and bronze objects,” says the archaeologist. “The burial offerings alone are enough to fill a museum.”

One Hellenistic burial included a gold-plated wreath, while archaeologists also found rings, ornately adorned vessels, painted bone objects, large quantities of cosmetics and lamps decorated with gladiators and masks, indicating the existence of theater. They also found an actual theater, as well as an odeon and a stadium. “These Hellenistic graves were also used in the Roman years,” explains Korka.

The coins yielded by the site have also surpassed all expectation, coming to around 300 a year.

In 2018, Korka’s team discovered a two-lane road that was used from the late Mycenaean to the late Roman period, luxurious Hellenistic houses and ample evidence of Roman activity, such as clay and marble floors, small columns, drainage pipes and day-to-day objects that pointed to prosperous and active communities. That same year, the History Channel ranked Tenea among the world’s 15 most important excavations. The BBC has visited the site twice this year, while France’s TV5 did a documentary on its relationship to Troy.

The city’s baths, the first public building to come to light, were discovered last year, and more than 800 square meters have been excavated so far. “In one of the rooms we found glass strips we believe were used to draw the sunlight for heat, like a solarium,” says the archaeologist.

Korka is also excited by the center of the market, the workshops and especially the shops that were discovered earlier this year. It has yielded 30 gold seals, coin hoards, glass objects, clay pots, jewelry and scales, all apparently abandoned in situ during a raid or a natural disaster, and pointing to an equally prosperous and active society in later years as well.

Two inscriptions are especially exciting. One was discovered on the stone base of a bronze statue from the 4th century BC and bears the name Peisandridas. It is thought to have been dedicated to the city by an offspring of the Peisandrids – a powerful family mentioned by Pindar – and provides the first solid clue of a connection between Tenea and Tenedos. The other appears to be part of a 5th century BC public inscription with a painted cornice. It was found together with a silver obol from Argos from the same period.

“Everything from this excavation points to the site being in continual use from the 6th century BC to the 6th century AD. Tenea was a multicultural city, strategically located, vibrant and well connected in all of its phases. It was dynamic, and while it followed Corinth in many of its policies – on matters of war in particular – it always strived to be independent, especially during Roman times,” says Korka.