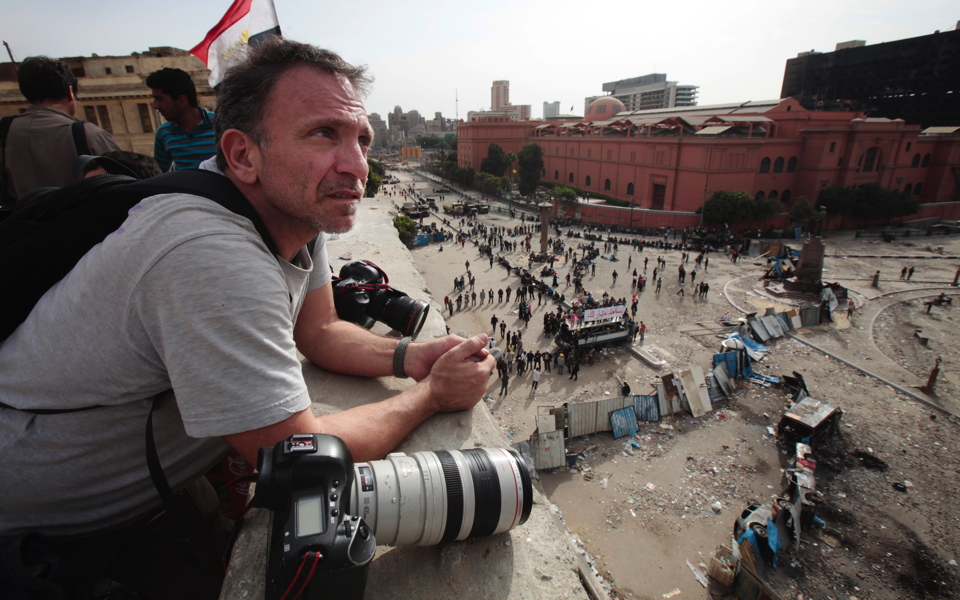 In this photo taken Feb. 4, 2011, Greek photojournalist Yannis Behrakis, while on assignment, looks at anti-government demonstrators in Tahrir square, in Cairo. 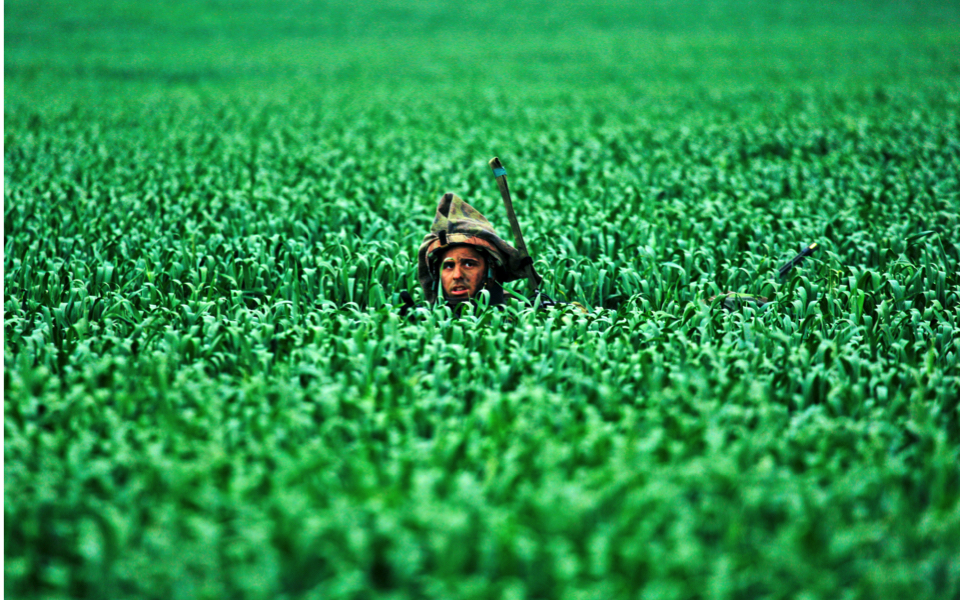 An Israeli soldier walks through a field near Kibbutz Nahal Oz, just outside the Gaza Strip, February 25, 2008. A Syrian refugee kisses his daughter as he walks through a rainstorm towards Greece's border with what is today known as North Macedonia, near the Greek village of Idomeni, September 10, 2015.
GIORGOS ARCHIMANDRITIS
March 5, 2019 05.03.2019 • 15:50

“I feel a very strong need to speak for those people who have been treated unfairly or those who have no voice. This, I feel, is my mission,” award-winning Greek photojournalist Yannis Behrakis, who died on Saturday, told Kathimerini in an interview first published on September 11, 2017.

The interview preceded the launch of a digital photography exhibition at Zappeion Hall, a part of which was dedicated to the work of the Reuters senior editor. Kathimerini is republishing that interview in tribute to Behrakis’s life and work.

What is a photographic moment for you?

It is that infinitesimal bit of a second which I capture with a click of the camera. Using my experience, instinct and imagination, I can see maybe a little ahead of time and find myself at the point where, with light as my ally, I will catch this magical moment, this “decisive moment,” as Henri Cartier-Bresson put it, when the lines, the shadows, the forms come together to create something very strong. This is why, when I’m working, I’m completely focused on what I’m doing. I don’t just take pictures with the eyes. I take pictures with the eyes of my soul. This is the only way I believe I will achieve that click which will eventually affect, through Reuters, millions of people around the globe.

Do you feel there’s an ecumenical sensitivity toward the photographic representation of human suffering?

When someone sees a picture, they obviously receive its message, the news it conveys, that is, in their own way. I believe there’s a common sensitivity as far as human pain is concerned. Because, while a large number of people do not have real problems, or their problems are small, another huge number does not have water to drink, shoes to wear, a home to live in. And I think everyone sympathizes with these people – some more, others less. And I have seen it. With the refugee crisis, for example, people from around the world have been mobilized through my pictures, they have come to Greece to help, or sent money and clothes, doing a fundraiser or anything else. This means that these photos have fulfilled their purpose.

Can you recall any particular moment that particularly touched you as a human being while covering the refugee crisis?

There have been many moments out there that made me feel part of the whole thing. There’s also another thing that I never forget. I, like many other people, have refugee blood in me. My grandmother was a refugee from Smyrna (today’s Izmir) and she used to narrate what her family had gone through. So I know very well what refugees are going through today. One of these moments was in Idomeni (on the Greek border with North Macedonia) in the winter of 2015, when I saw a man who had been carrying his daughter in his arms for miles in the rain. He was wearing a homemade cape made of rubbish bags to protect himself from the rain. And at some point as he was heading toward what he believed was freedom and vindication, he wrapped his arms around his daughter and kissed her… He looked sort of huge to me right then, something like a superhero. And because I too have a daughter around that age, the spectacle had a very strong impact on me.
I often joke that with this photograph I proved that superheroes actually exist. He or she may be an ordinary person without education, a poor person, or a beggar. But there comes a time when this person will carry out an act so powerful that it strikes you with its beauty.

What is this beauty you are talking about?

Beauty is all around us, and so is ugliness. They often come hand-in-hand. And this is something I have seen and felt and photographed. Over the 25 years of my career, I have witnessed this coexistence. I am not talking about beauty in aesthetic terms. I’m talking about a beautiful act, a beautiful life-stance. Beauty can emerge through misery and disaster. I remember an image from an earthquake in Pakistan where the rescue crews were digging in the ruins of a house for hours and when they finally reached the foundations, they came across a dead man holding his wife in his arms in order to protect her. It was a sight of human beauty amid total disaster. It was a riveting spectacle.

Is it the beauty of hope?

You know, I often think that we need a crisis to see whether there’s any sensitivity left. Because we often tend to forget. When things are going well, we are all happy. When things get hard because of an economic crisis, a flood, a wildfire, or war, then we suddenly realize the strength of the people. I will never forget that moment in August 2015 on the island of Kos when I saw a somewhat elderly woman sitting on the beach. The sun had just risen, casting light on her face. She was smiling. It was a very quiet moment. Because I did not want to destroy the peace and quiet, I took some photos from a distance… and at some point I approached her and gave her a sweet, a Greek welcome, as it were. It was then I realized she was blind. My soul was filled with emotion. She put her hand on my arm, the smile was still on her face. She said she felt gratitude that she had been able to make it so far, that she could feel the breeze and the smell of the sea. She felt there was hope for her, her children and her grandchildren. She was of Palestinian origin and she had been uprooted for a second time, this time from Syria. And yet she had not lost hope in the beauty of this world.

Is this the kind of faith you wish to express with your photographs?

What I want to show is that these people can be any one of us, any person looking for a better tomorrow. Because life is an endless journey, from one home to the next, from one job to the next, from one “life” to the next – all toward a better future. Even more so when there is nothing left for you because your house has been burned down or your life is at risk. So if I can show with my pictures what I deem is just and good, if I can convey these universal values, then I have fulfilled my duty. Because for me, a photograph carries a message. I feel a very strong need to speak for those people who have been treated unfairly or those who have no voice. This, I feel, is my mission.