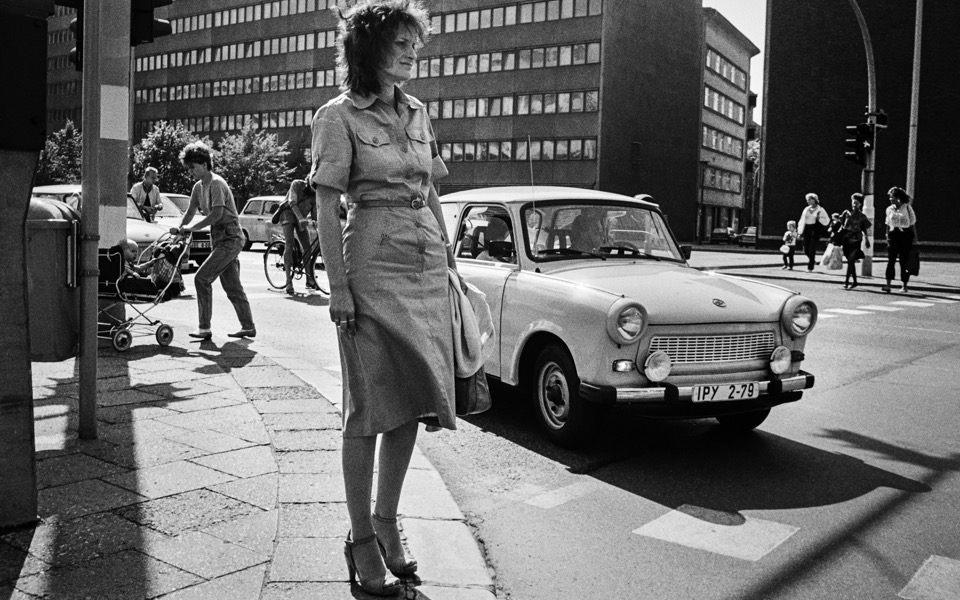 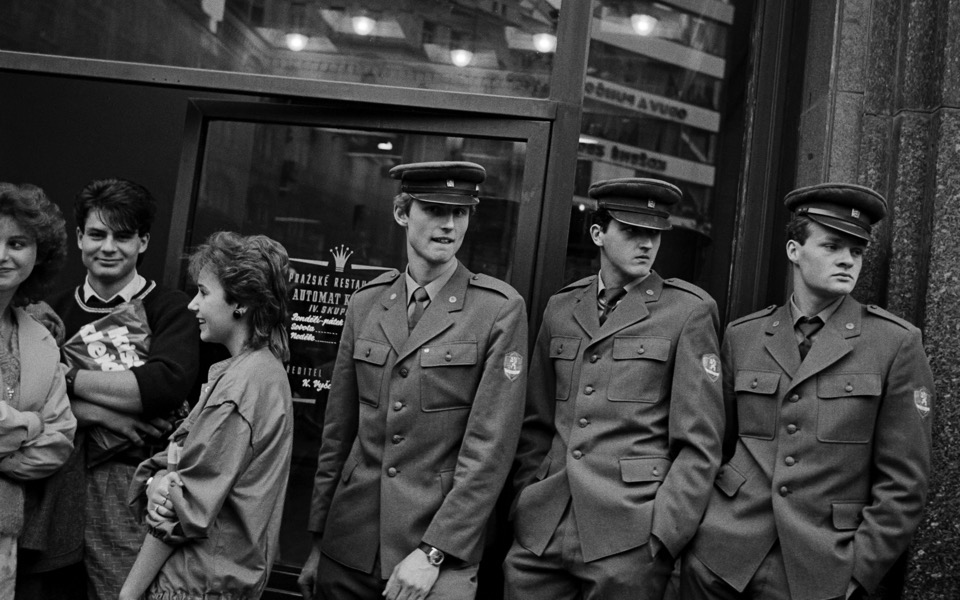 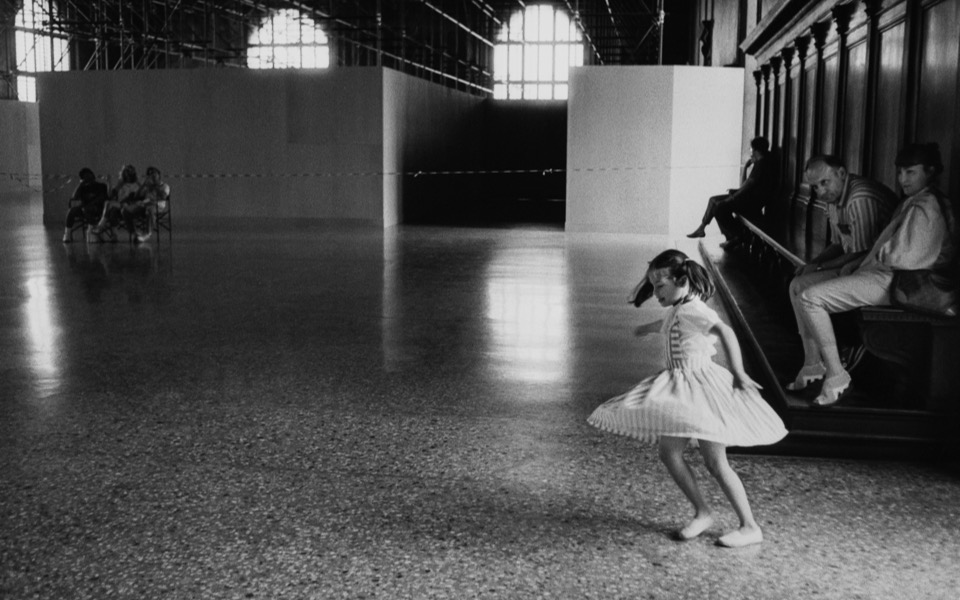 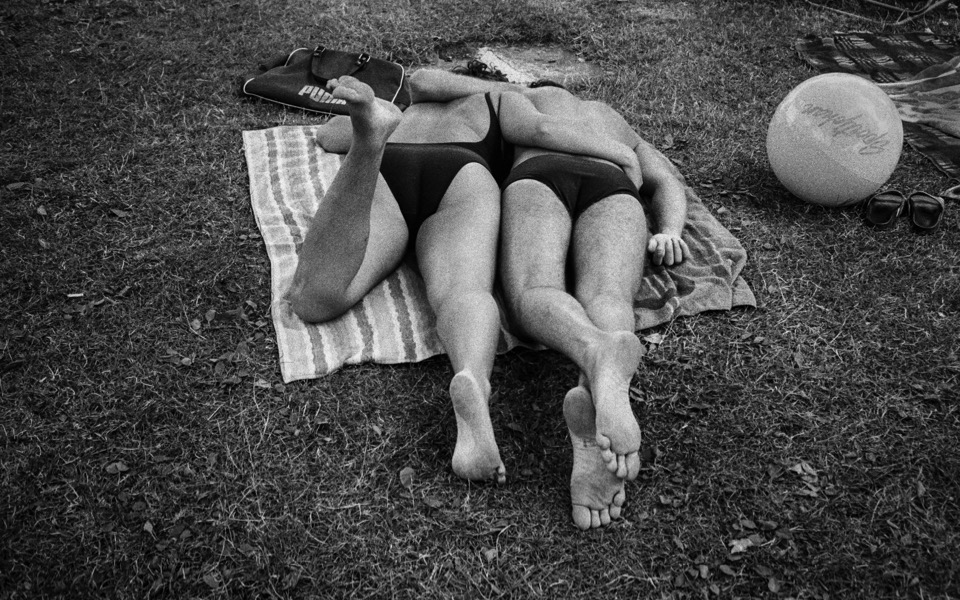 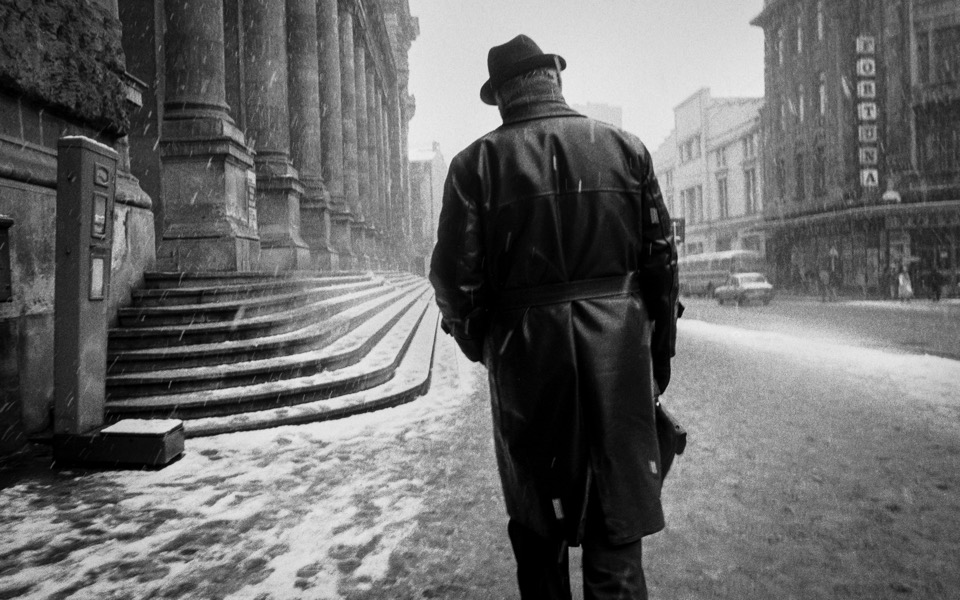 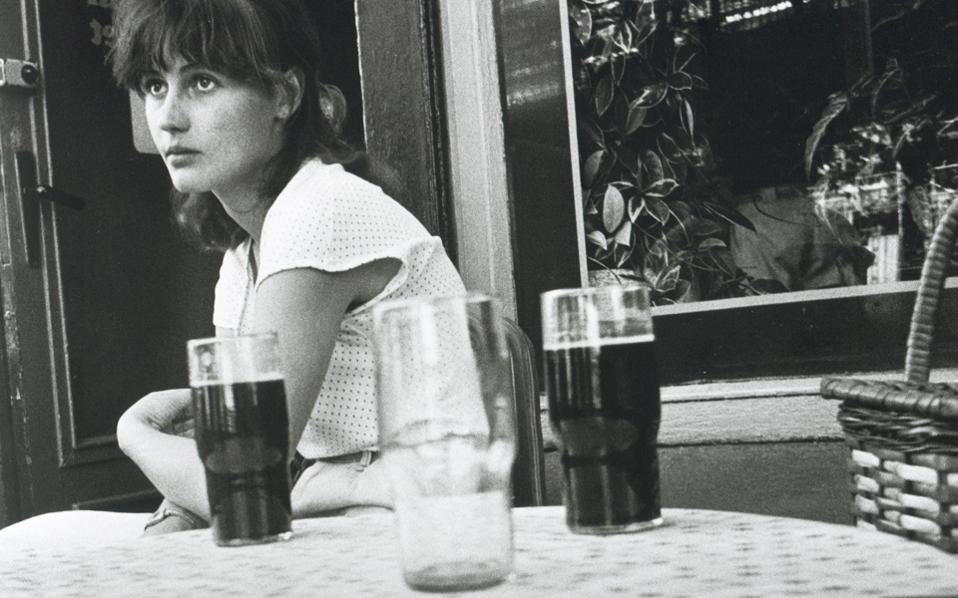 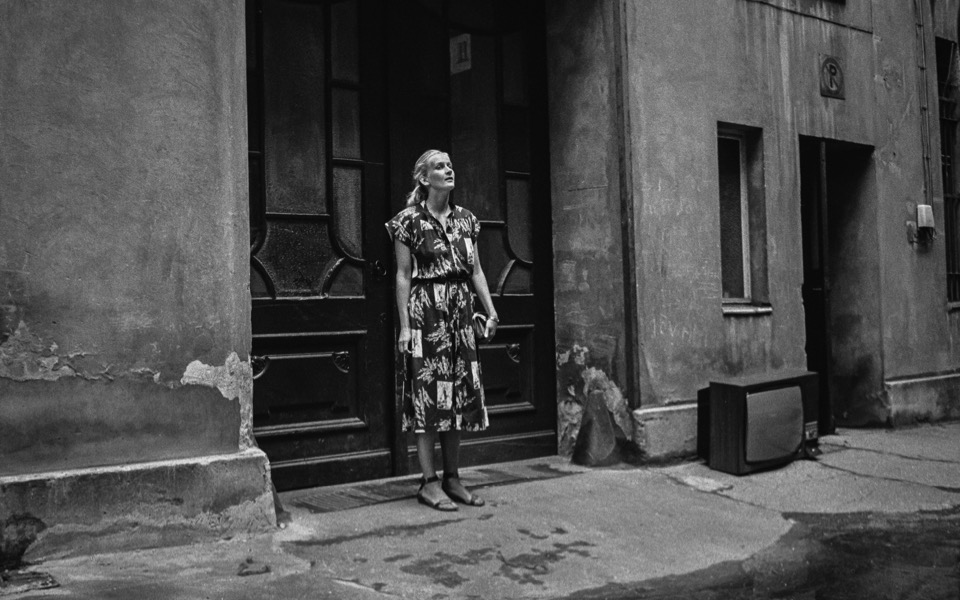 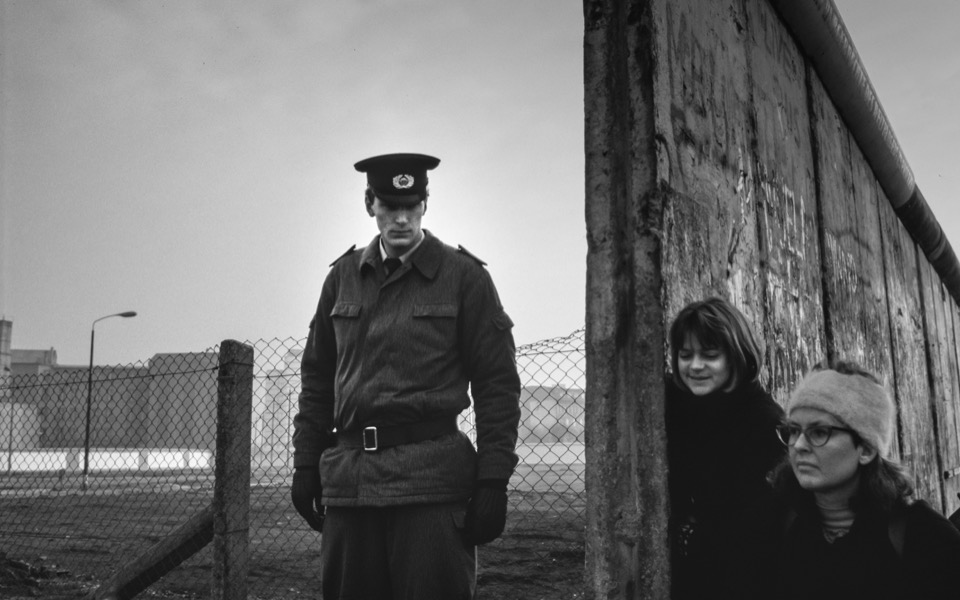 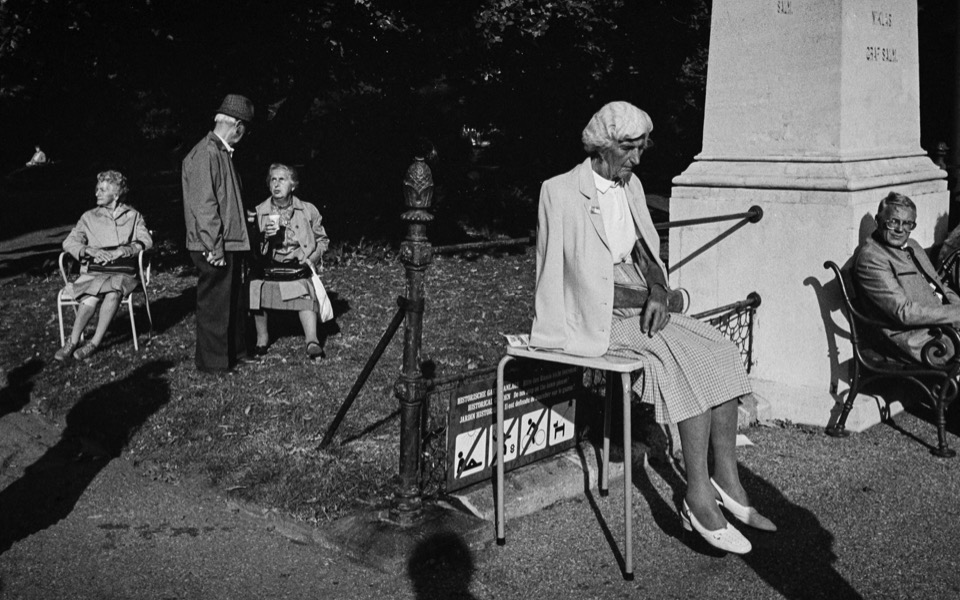 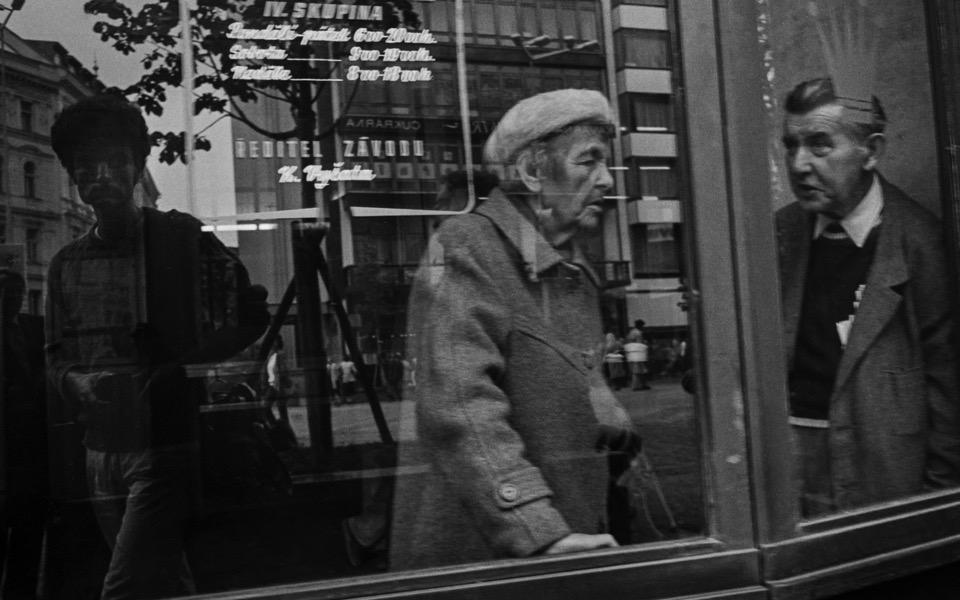 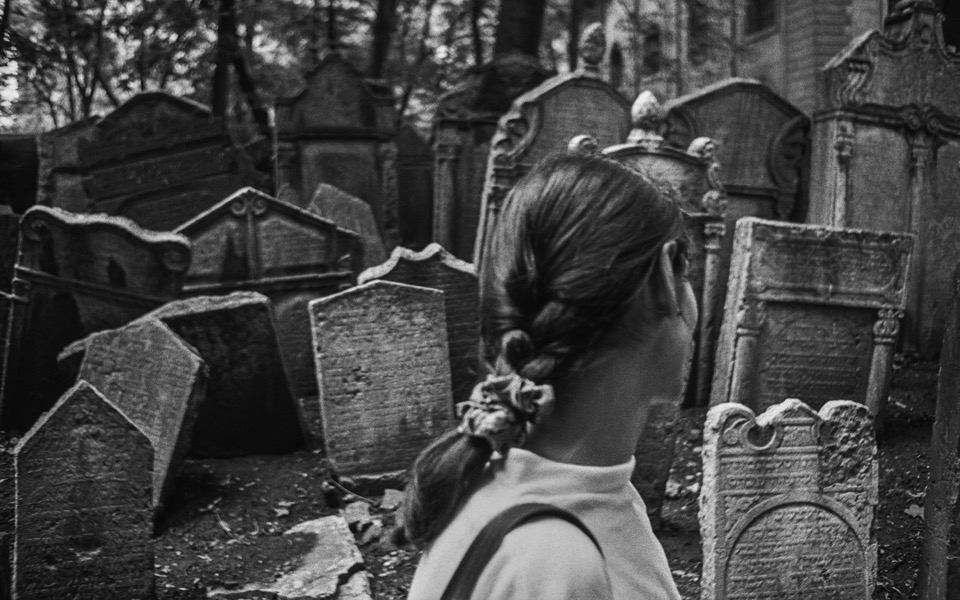 There is a thinly disguised self-portrait of Constantinos Pittas embedded in one of his photographs currently on display at the Benaki Museum’s Pireos Street annex in Athens. The 29-year-old’s skinny silhouette and dark curly hair are reflected in the left-hand corner of a shop window as he presses the shutter release on his pocket-size camera. It’s Prague, 1986.

There is a road-not-taken existential quality to the selfie (before it was a word). Pittas would soon put down his camera and box up this and thousands of other negatives shot during that time.

“It’s strange, I feel sad and happy at the same time about this. Sad because you realize that ‘this was my talent’ which I had to give up so I could do other things for a living. If I had kept going I would probably have amassed a serious body of work by now,” says Pittas, now 59, before guiding a group tour through the exhibition “Constantinos Pittas: Images of Another Europe 1985-1989.”

Between 1985 and 1989, he drove a now-iconic blue Pony (which he also slept in) across 17 countries, capturing street scenes on both sides of the former Iron Curtain. He would spend the autumns in Athens doing odd jobs to save money and set off again in spring. Over those five years, Pittas, a self-taught photographer, went through about 650 black-and-white film rolls, producing some 25,000 negatives.

“I always thought that this was a very personal project and that no one would take any interest in it. I was neither doing photojournalism, like recording the end of the Cold War, nor was I doing art photography,” he says.

“It was something personal, a momentary madness that I just needed to pursue and I saw no point in touting it afterward or trying to build a career on it,” he says.

As the Berlin Wall crumbled into souvenirs and history on the Continent accelerated, Pittas settled down, got married and had children. He had a go at several jobs, including teaching as a mathematician and founding a small advertising business, to make a living.

One day in 2014, he came across his old camera. It prompted him to look for the negatives from his Europe project before posting some scanned images on his Facebook wall.

And so it began.

“In the next couple of years I uploaded more than 600 photos. I realized there was a whole bunch of people out there who were keenly interested in this,” he says.

Besides outside interest, a more profound motive was at work.

“There was something that made me feel a bit bad about myself. It was as if I had locked up all those people I had photographed in the basement for so many years. I felt that I could no longer keep them to myself. It was a mistake,” he says.

The project was put back in motion.

Pittas carefully picked out nearly 100 of the images and released a photo book using a self-publishing platform. One of the 1,000 copies ended up in the hands of Costis Antoniadis, a professor of photography at the Department of Photography and Audiovisual Arts at the Technological Educational Institute of Athens. Antoniadis was a catalyst in introducing the work to a broader audience. He first helped Pittas organize an exhibition on the island of Kythera, and then curated the current show, a selection of 155 images.

The Benaki collection is street photography at its best – natural, opportunistic and artfully composed. Clean and pure, as if they were preserved in a time capsule, the images document a bygone era. Although Pittas did not intend to make a political statement with his work, the impact of the Eastern Bloc’s jailhouse habits is evident in the pictures, particularly the oppression and poverty of Ceausescu-era Romania.

It was not quite what he had anticipated. Like many Greek university graduates in the years following the country’s 1967-74 military dictatorship, Pittas, who has a degree in civil engineering, had the delusion that things in the Eastern Bloc were much better there than they actually were.

Pittas experienced strong-handed tactics firsthand. Twice he was detained by police and had his films confiscated. However, his small-sized camera – a German-made Minox 35 GT, one of the smallest full-frame 35mm cameras ever produced – made him invisible most of the time, allowing him to capture a few risky shots, including a black leather jacket-wearing senior Politburo member that can be viewed at the exhibition.

Despite the disturbing asymmetry between the Soviet bloc and Western Europe, in the eyes of the young photographer there were resemblances that pointed to a European family of sorts.

“I always thought there was something underneath. That the Portuguese university professor and the Polish farmer have something in common. It was something that I did not see when I traveled outside Europe. Maybe this feeling was fed by my idealism and my fascination with Mitteleuropa,” Pittas says.

In the late 1980s Europe was approaching its watershed moment, but, Pittas admits, this was certainly not something you could feel in the air.

“Anyone can be a prophet in hindsight. With the exception of Poland and the Solidarity movement, the rest of Europe at the time was in a state of total inertia. If someone were to say in 1986 that the world would turn upside-down in three years’ time, they would be regarded either as a madman or a great visionary. There was no way you could sense the change that was to come,” he says.

As the communist system started to implode, Pittas felt it was time to wrap up his project.

“I had this naive dream of bringing Europe together in one book. However, Europe was now reuniting on its own, it did not have to wait for me. My plan was dead,” he says.

Listening to Pittas explaining his work to a small group of visitors at the exhibition, you see a man with a renewed sense of purpose.

“I was never interested in making a name for myself. I never felt I had something to prove. But it is still a joy – and this certainly does not classify as vanity – even at this age, to feel that there was a meaning to it all. It has given me a great deal of satisfaction,” he says.

Pittas has resumed his old hobby. He again relies on a humble (though now digital) pocket camera and always shoots from waist level. “You don’t change your style,” he says.

Going down into that basement, Pittas seems to have found much more than he was searching for, including a part of himself.

“Constantinos Pittas: Images of Another Europe 1985-1989” runs at the Benaki Museum (138 Pireos & Andronikou, www.benaki.gr) through November 20.