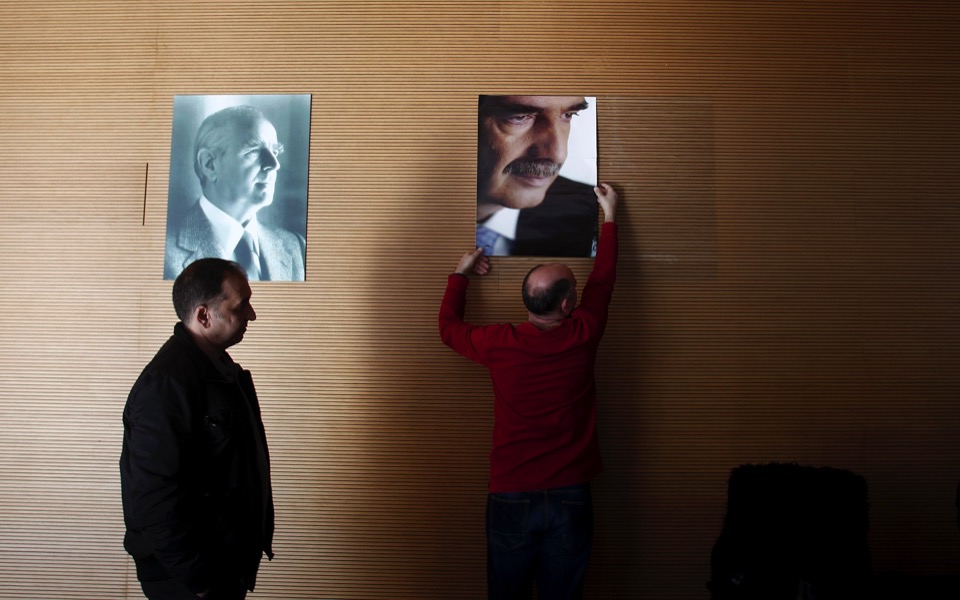 An employee of the New Democracy party reaches up to remove a portrait of interim party leader Vangelis Meimarakis from a wall at the party headquarters in Athens, January 11. Kyriakos Mitsotakis was elected president of the conservative party in runoff elections on January 10, defeating Meimarakis, who had served as interim party leader over the summer after former prime minister Antonis Samaras stepped down. [Alexandros Vlachos/EPA] 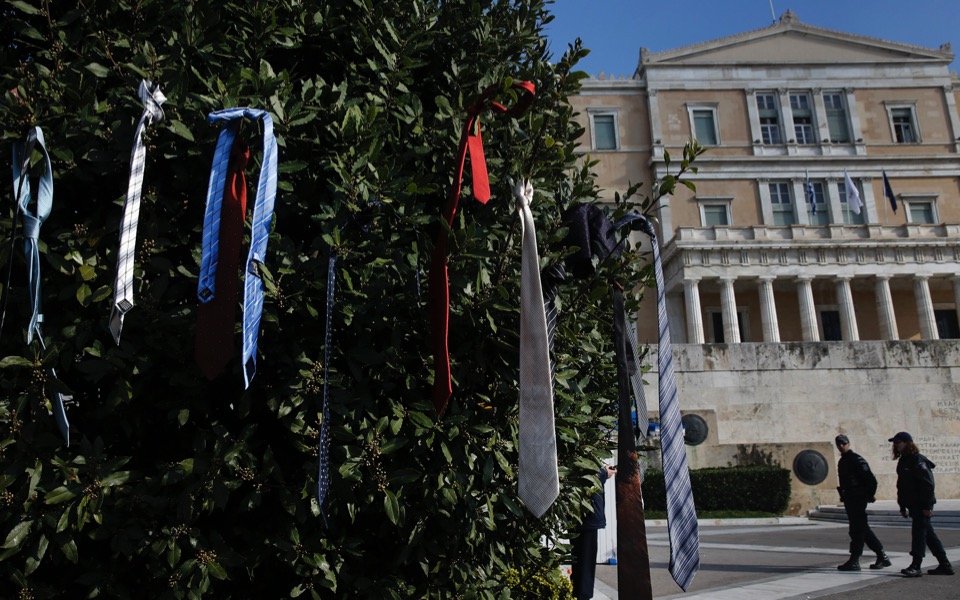 Ties hanging on a tree in front of the Parliament building in Athens, having been placed there in a symbolic gesture by protesting Greek lawyers during a demonstration against a set of planned pension reforms on January 21. [Alkis Konstantinidis/Reuters] 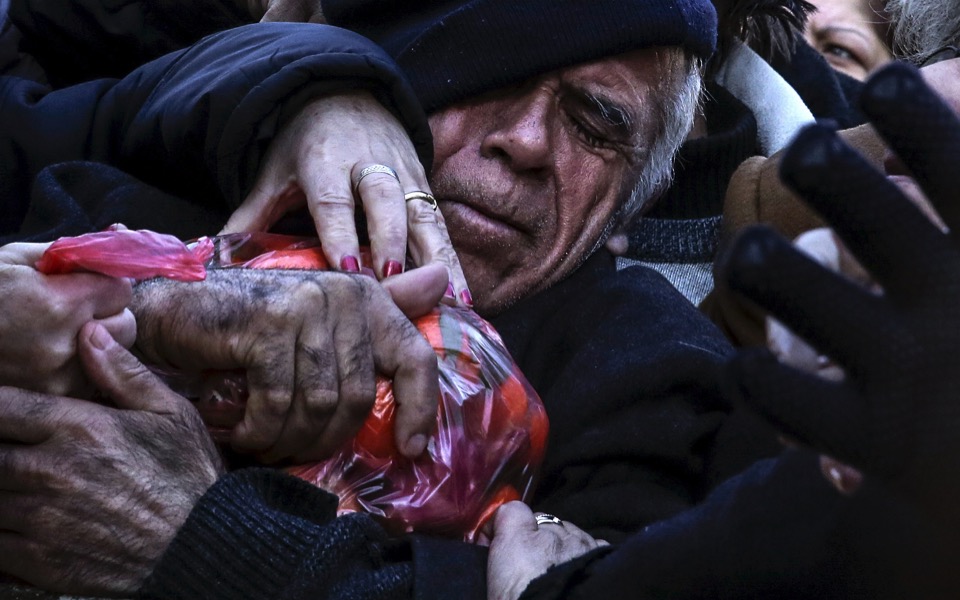 A man clings onto a bag of tangerines as people receive free produce, handed out by farmers, during a protest over the government's proposal to overhaul the country's ailing pension system in Athens, January 27. [Alkis Konstantinidis/Reuters] 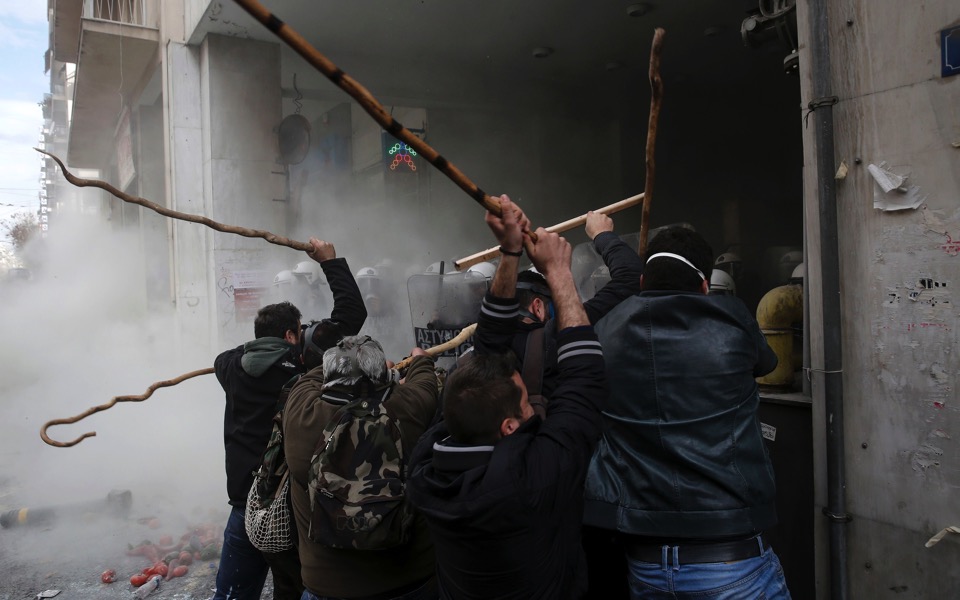 Farmers clash with riot police during a protest outside the Ministry of Agriculture in Athens, February 12. Farmers from across Greece gathered in the capital for a two-day protest against the government and its plans to impose new tax hikes and pension cuts. [Thanassis Stavrakis/AP] 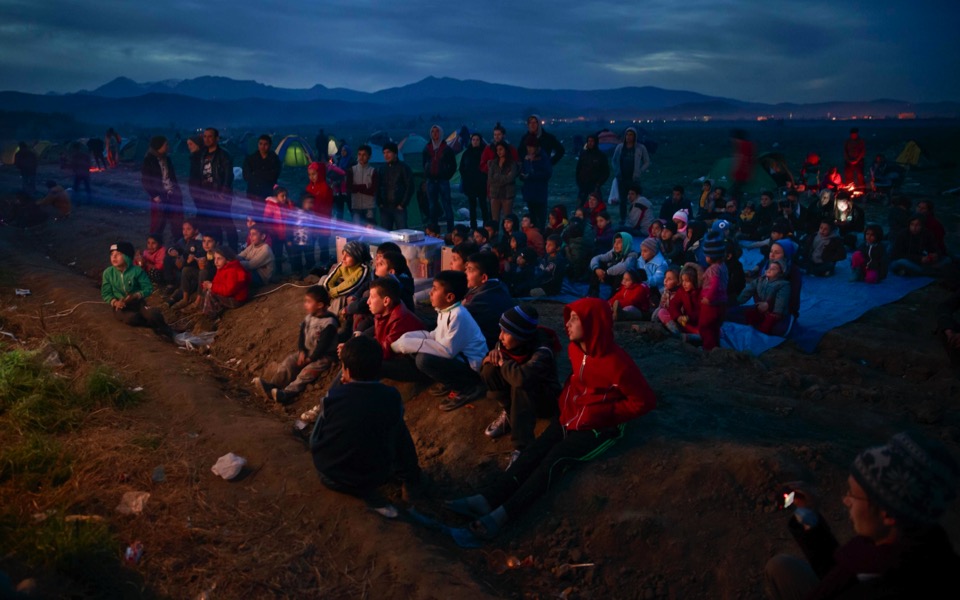 Children watch an animated movie in a field at the northern Greek border station of Idomeni, March 5. The Idomeni border crossing in the Greek region of Central Macedonia became a bottleneck where thousands of migrants were trapped as they tried to find refuge and a better life in Europe. [Vadim Ghirda/AP] 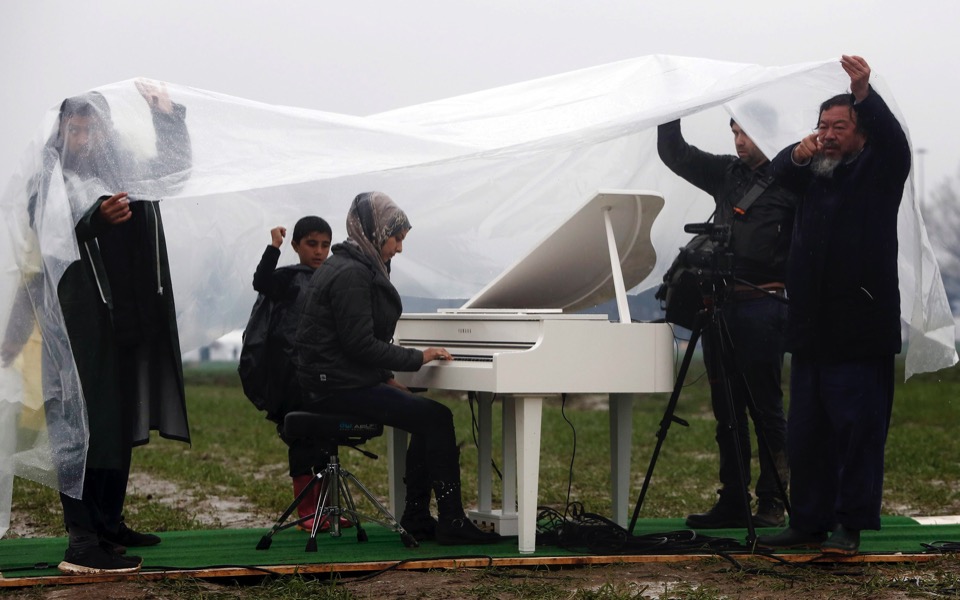 Chinese contemporary artist Ai Weiwei protects himself and others from the rain as Nour Al Khizam, from the city of Deirez Zor in Syria, plays the piano during a performing at a refugee camp near Idomeni in northern Greece, March 12. [Yannis Kolesidis/EPA] 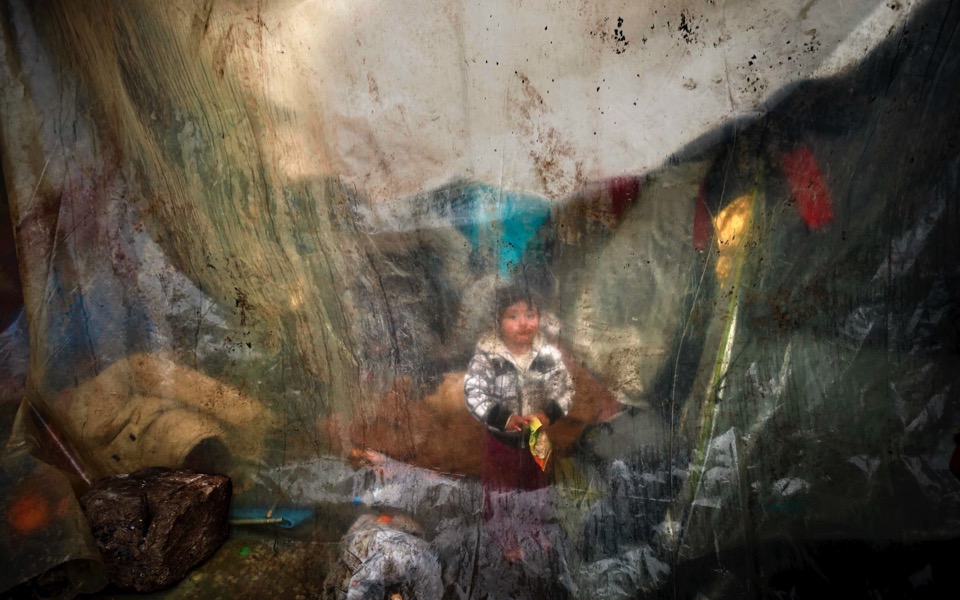 A migrant child sits behind plastic sheets covering tents as it rains in a makeshift camp at the northern Greek border post of Idomeni, northern Greece, March 15. [Vadim Ghirda/AP] 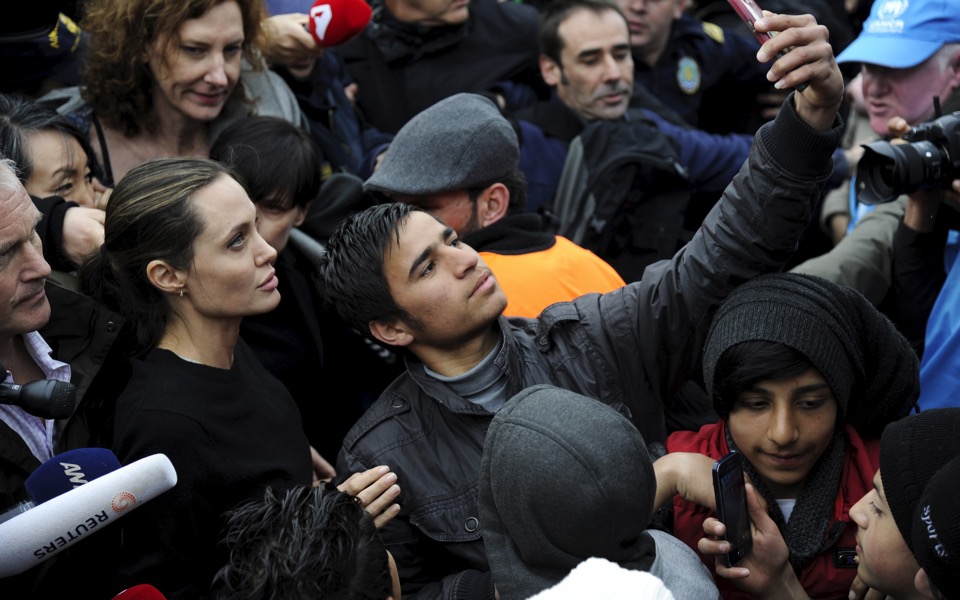 A refugee takes a selfie with United Nations High Commissioner for Refugees Special Envoy Angelina Jolie during her visit at the port of Piraeus, near Athens, March 16. [Michalis Karagiannis/Reuters] 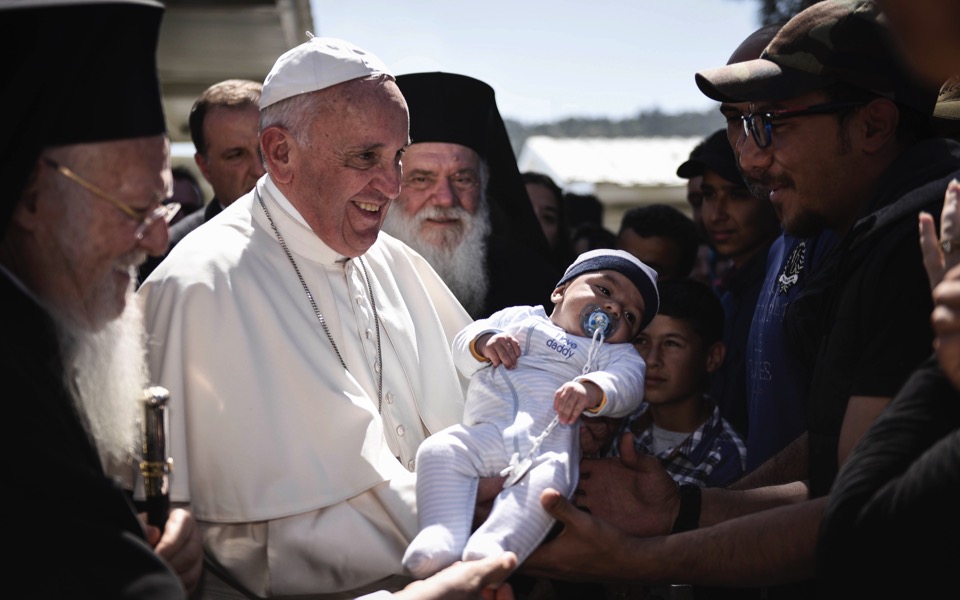 Pope Francis, leader of the Catholic Church, holds a baby during his visit to the Moria hot spot for migrants and refugees near Mytilene on the Greek island of Lesvos, April 16. The pontiff challenged leaders to respond to migrants ‘in a way worthy of our common humanity’ and pointedly called for Europe to remember its roots as ‘the homeland of human rights.’ He drove the point home by returning to Rome with a group of Syrians who were among the thousands stranded in Greece as a result of the decision by many European Union member-states to bar new arrivals. [Andrea Bonetti/Prime Minister’s Office/AFP] 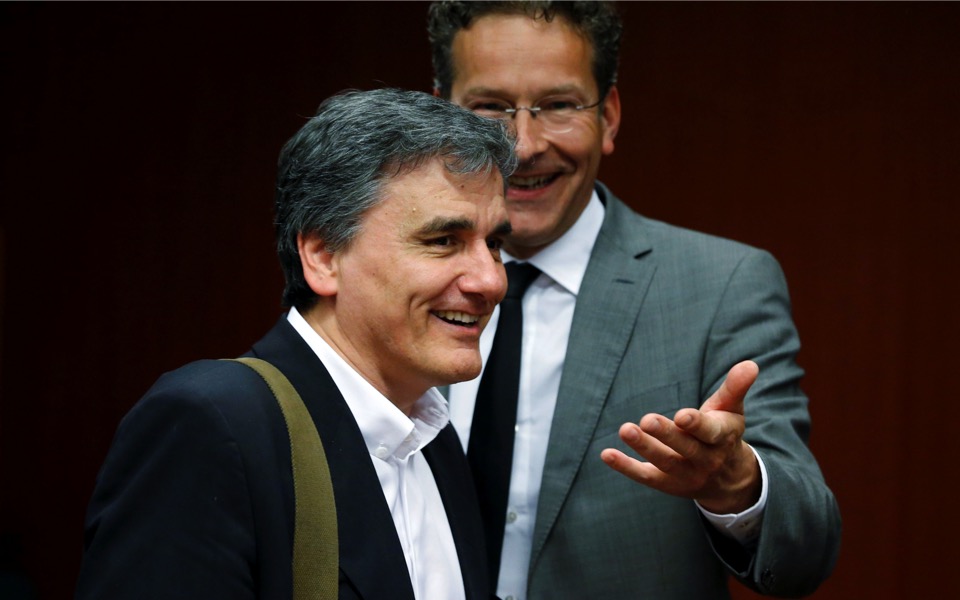 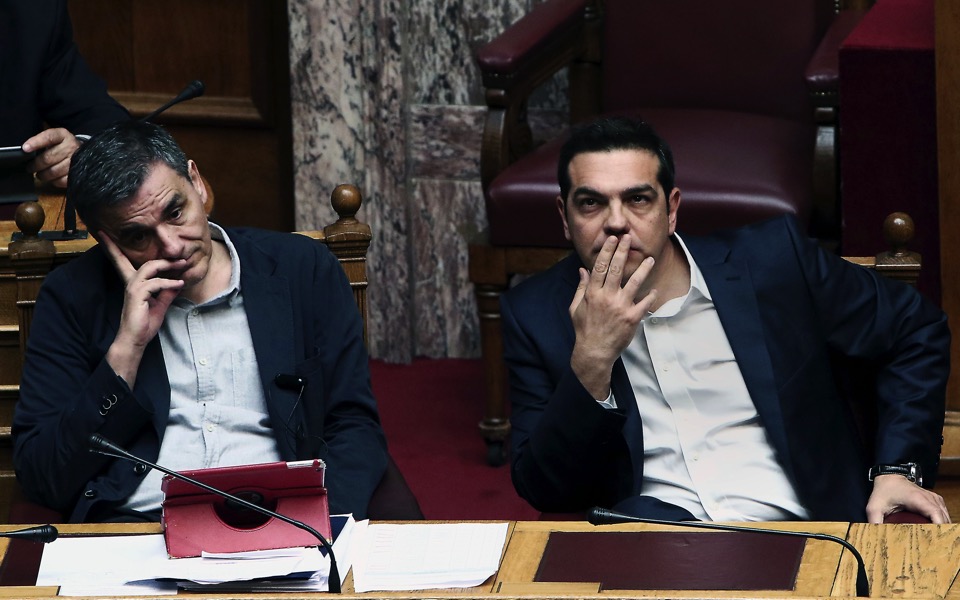 Greek Prime Minister Alexis Tsipras (r) and Greek Finance Minister Euclid Tsakalotos (l) attend a parliamentary session in Athens, May 22, ahead of a vote on fresh cuts and tax hikes. After waves of protests over a string of unpopular reforms, lawmakers from the ruling leftist party approved a fresh round of austerity incorporating 1.8 billion euros in tax increases on May 22. [Angelos Tzortzinis/AFP] 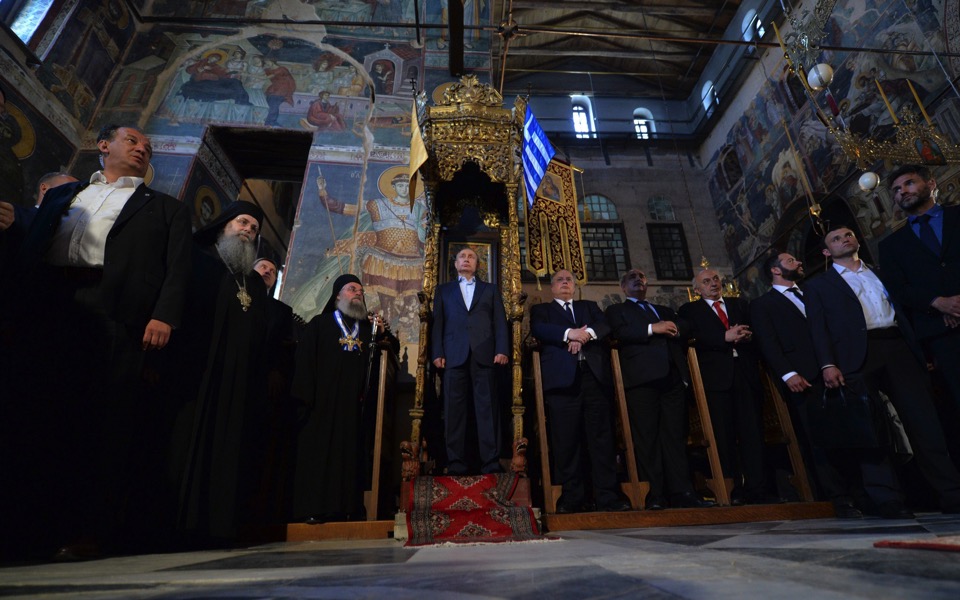 Russian President Vladimir Putin (c) visits the Church of the Protaton, dedicated to the Dormition of the Virgin Mary, in Karyes, the administrative center of the all-male Orthodox monastic community of Mount Athos, northern Greece, May 28. [Alexey Druzhinyn/EPA] 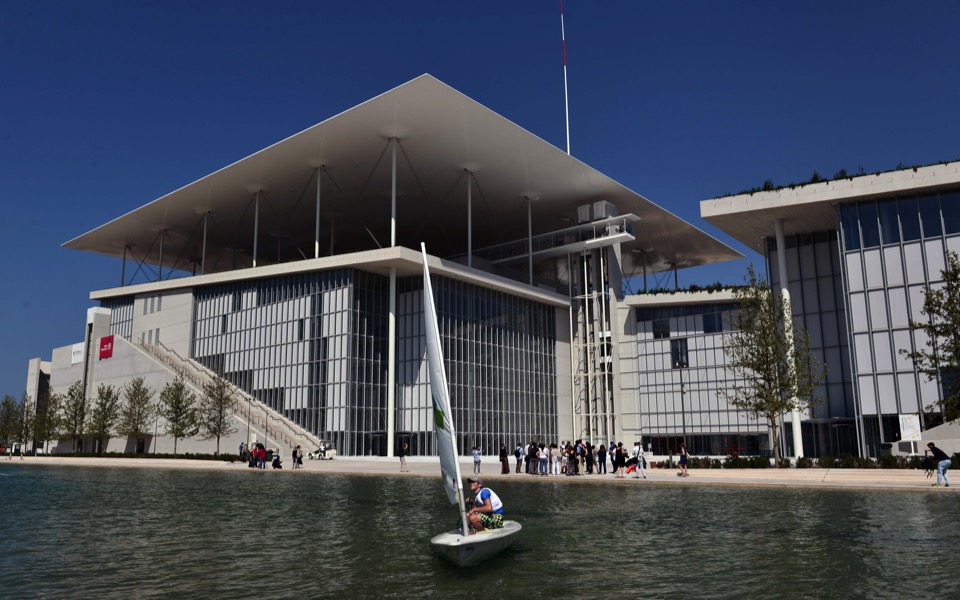 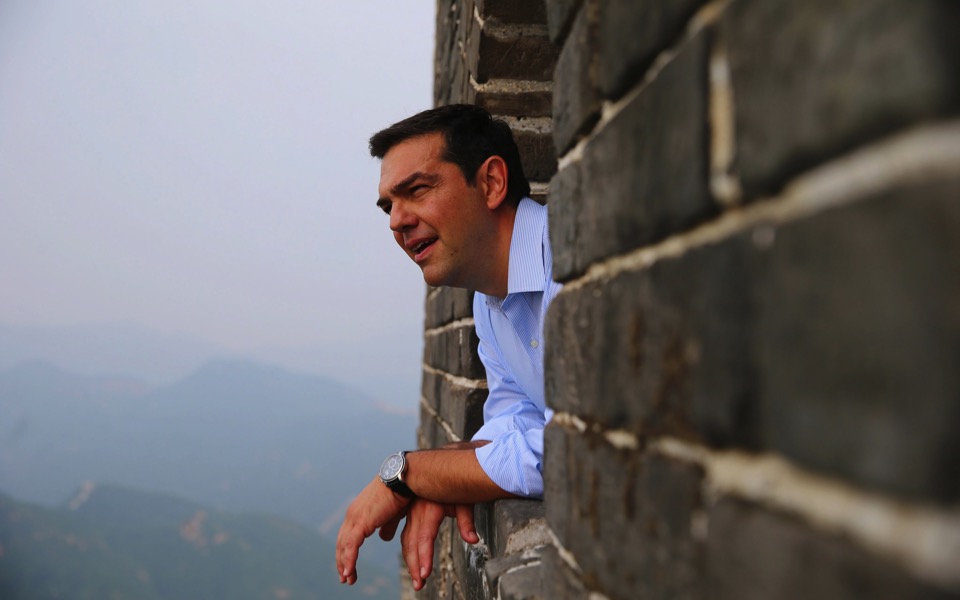 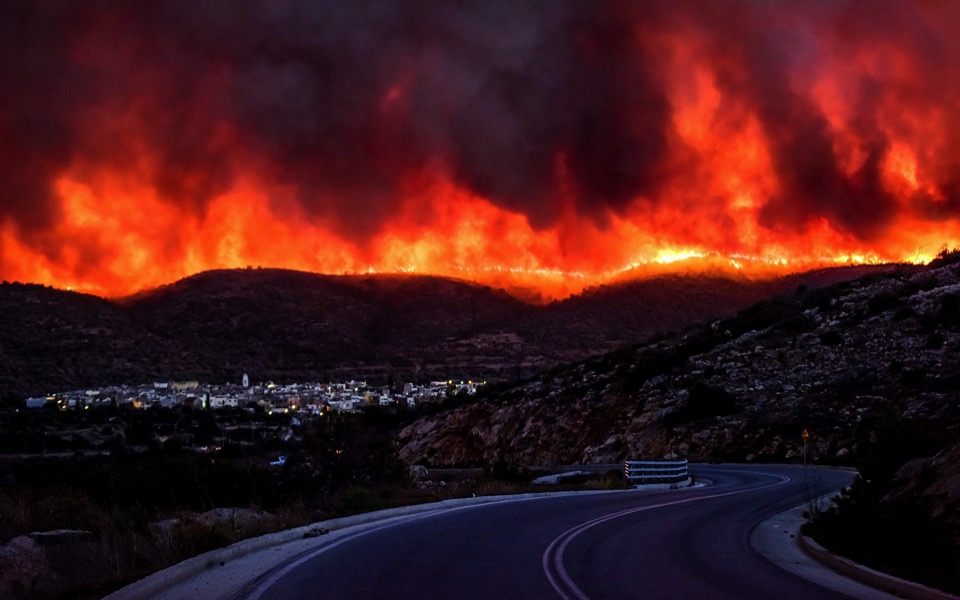 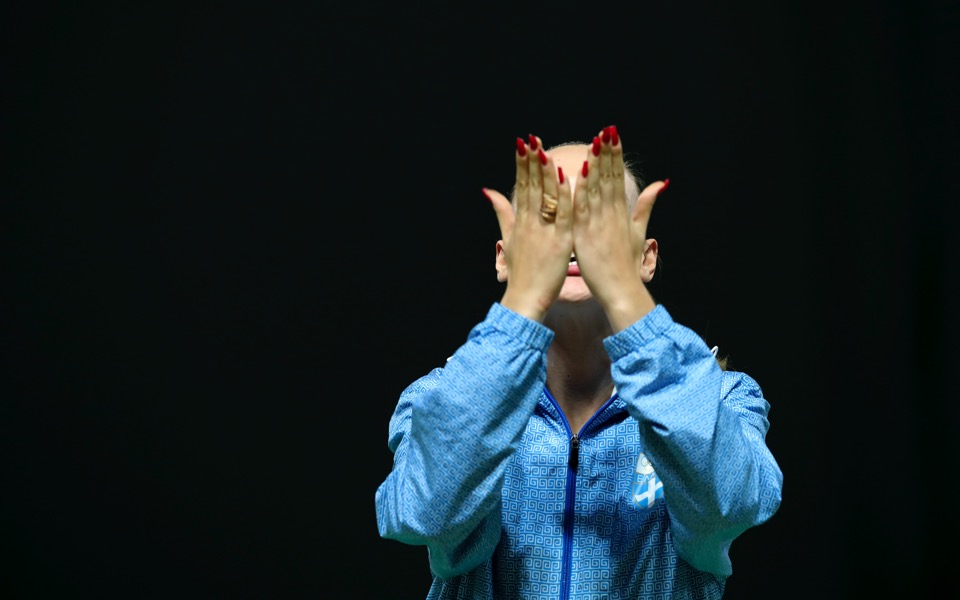 Gold medalist Anna Korakaki of Greece acknowledges applause during the award ceremony for the women's 25-meter pistol competition at the Olympic Shooting Center, during the 2016 Summer Olympics in Rio de Janeiro, Brazil, August 9. The 19-year-old won two of Greece's six medals in Rio, also picking up a bronze in the 10-meter air pistol. [Eugene Hoshiko/AP] 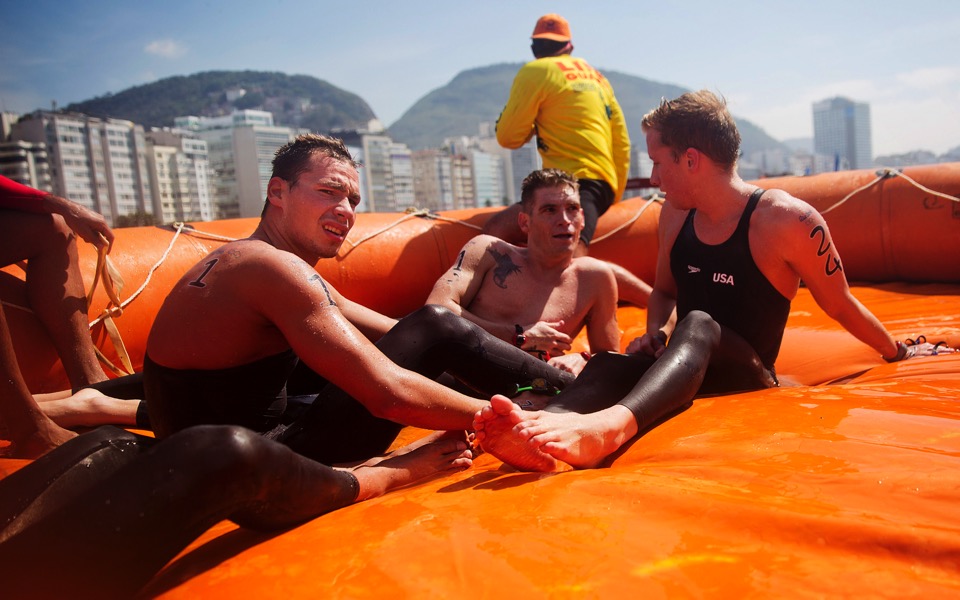 Spyros Gianniotis, of Greece, (c) rests on a raft with Richard Nagy, of Slovakia, and Jordan Wilimovsky, of the United States, after finishing the men's marathon swimming event at Copacabana beach at the 2016 Summer Olympics in Rio de Janeiro, Brazil, August 16. Ferry Weertman of the Netherlands took the gold in a photo finish. Gianniotis, 36, appeared to cross the finish line first, but the Dutchman touched the timing pad before him. Gianniotis won silver. [David Goldman/AP] 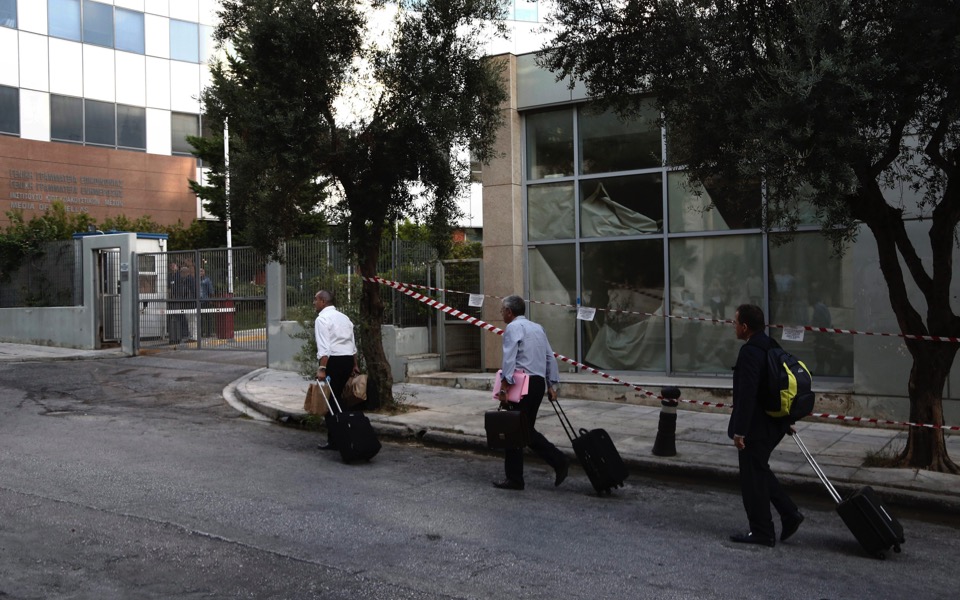 Representatives of Greek TV stations walk toward the General Secretariat of Information and Communications (GGEE) in Athens, ahead of an auction of broadcasting licenses, August 30. The GGEE building, where the tender took place, was thoroughly checked by police and sealed. Throughout the process the participants remained in specific areas and were not allowed to go out. A top court in Greece later annulled the auction because it was not overseen by the independent regulator. [Yannis Kolesidis/EPA] 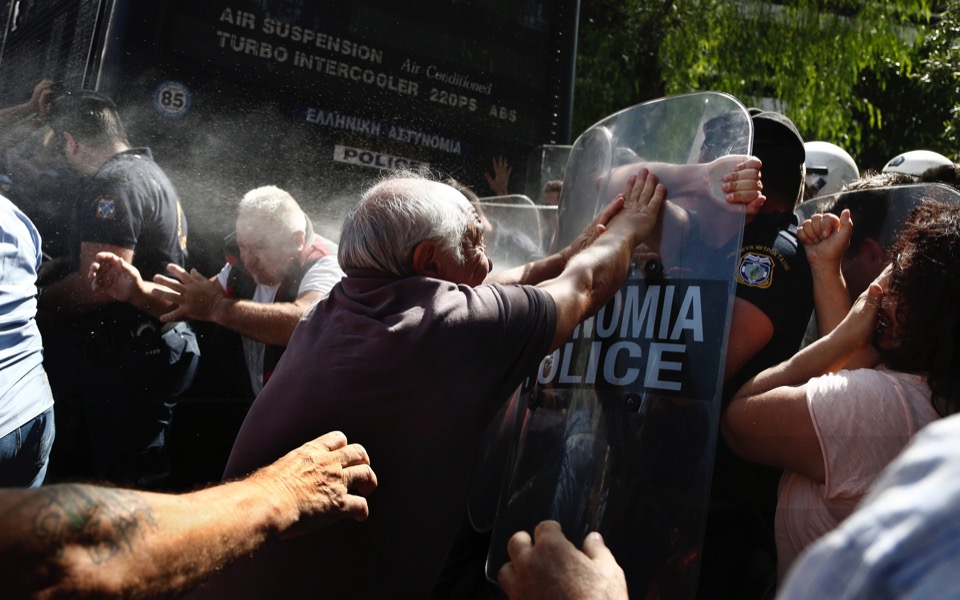 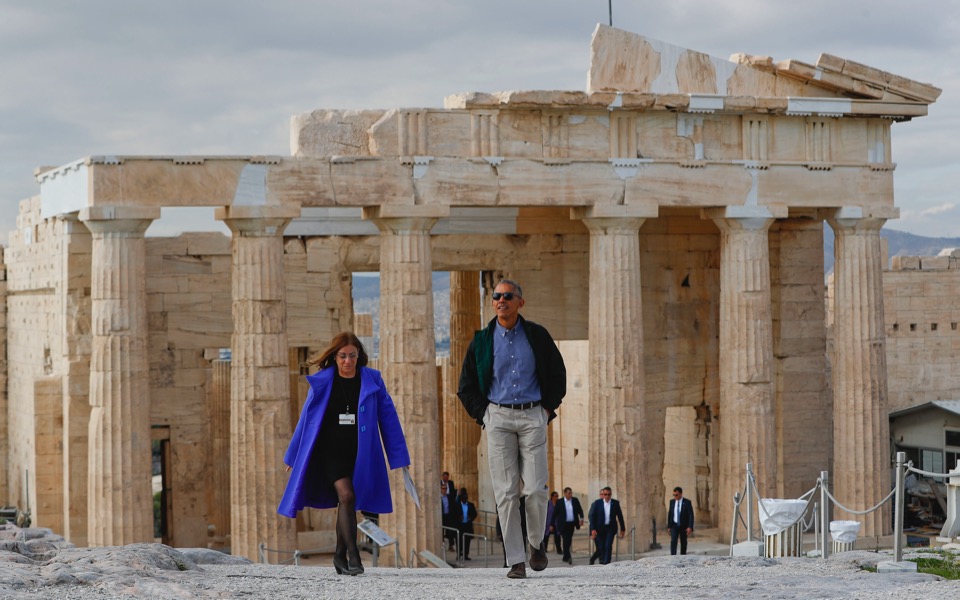 US President Barack Obama tours the Acropolis with Dr Eleni Banou (l) director of the Athens Ephorate of Antiquities, Ministry of Culture, November 16. Obama offered solidarity with Greece over its debt and migrant crises during his final trip to Europe as American president before handing over power to Donald Trump. [Pablo Martinez Monsivais/AP] 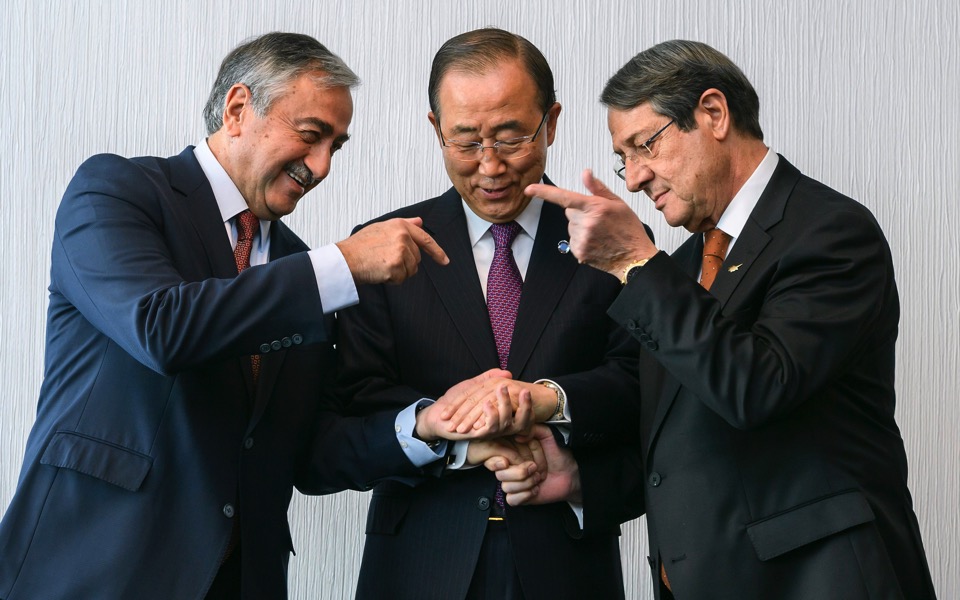 The year began with protests against pension reform and ended with the government handing a 617-million-euro bonus to pensioners. In general, 2016 had a back-and-forth feel about it. The government wrapped up the first program review but failed to conclude negotiations on the second assessment. They will drag on into 2017.

The refugee camp at Idomeni, on Greece's border with the Former Yugoslav Republic of Macedonia (FYROM), was cleared by spring but come autumn, overcrowding had begun to cause problems at so-called hot spots on the Aegean islands. In between, global figures and celebrities such as Pope Francis and Angelina Jolie visited Greece to draw attention to the plight of tens of thousands of people fleeing danger in Syria, Iraq and other places.

Other visitors to Greece this year included Russian President Vladimir Putin and Barack Obama, who paid homage to the idea of democracy in his last major speech abroad as US president before he passes the baton to Donald Trump, who takes the Oath of Office on January 20.

On the domestic political front, Kyriakos Mitsotakis sprung a surprise by winning the leadership race at New Democracy. The conservatives subsequently built a steady lead over SYRIZA in the opinion polls. After much legal wrangling, the government was forced to abandon its efforts to regulate the broadcasting sector. The Council of State found that its tender for four TV licenses was unconstitutional, meaning a new process will have to be launched.

Ancient world on view in Moscow

Visitors go behind the scenes at the NAM

Six Aegean monuments to be repaired with EU funds