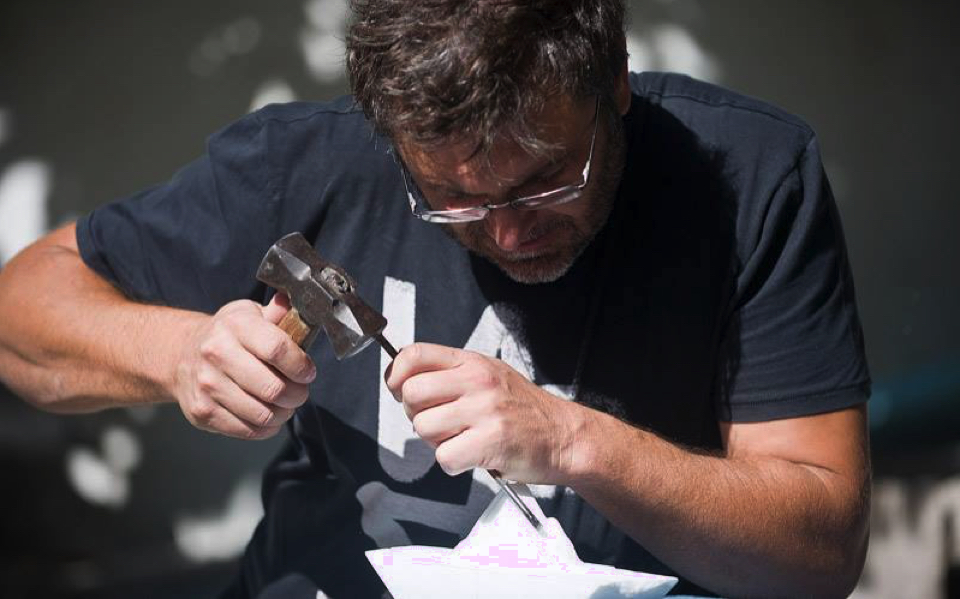 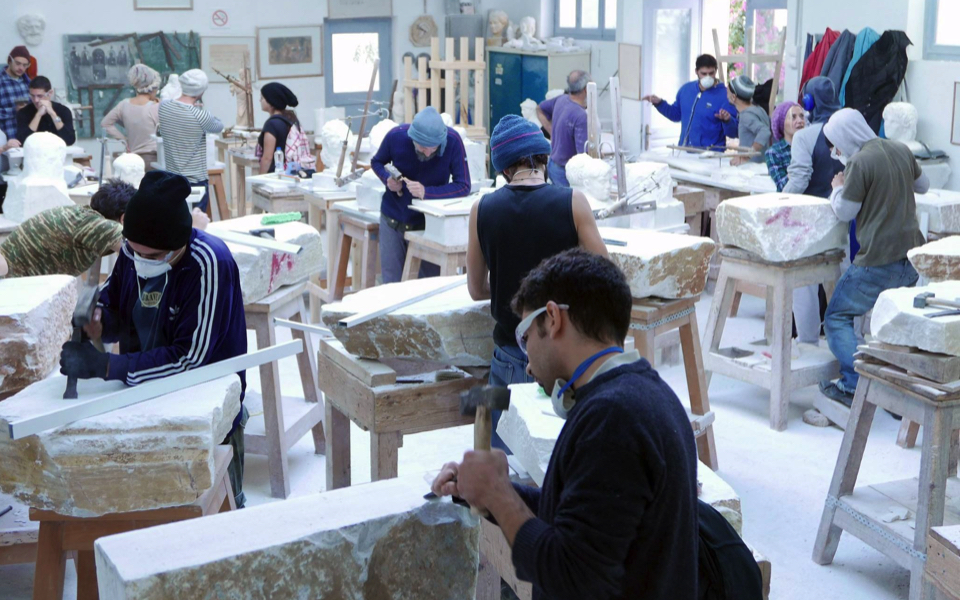 Yiannis Hondroyiannis knew how to use a hammer and chisel at the age of 7. “I learned all about marble and its secrets in my father’s workshop. I would go to the School of Marble Sculpture after regular school and have worked with marble ever since I graduated,” says one of many marble sculptors in Pyrgos, a village on the Aegean island of Tinos renowned for the craft, which dates back hundreds of years here. Like so many others, Hondroyiannis took up the profession of his father and his father before him.

With the craft passed down through dozens of generations, it comes as little surprise that the village resembles an open-air museum. Family crests on snow-white houses, iconostases, public fountains, signs and smaller objects all reveal that marble is an intrinsic part of life in what is Tinos’s second-biggest settlement after the main town, Hora.

Hondroyiannis runs one of seven workshops that have been operating for the past few years in the neighborhood of Exo Meria. Together with his brother – who only claims apprentice status – they take on commissions that can range from residential decorative features and utilitarian objects to church elements and busts, using local stone.

“Unlike my brother, I decided to work with marble at an older age,” says Dimitris Hondroyiannis. “I don’t regret it. It’s a really fascinating job because every new assignment is different. Marble is very generous, but you need to respect the material and stay focused. If the chisel slips a single centimeter, the piece loses its sense of perfection and needs to be done from the start.”

The reputation of the marble sculptors of Pyrgos (also known as Panormos) has traveled beyond the island, as they have taken part in major restoration projects, including the Acropolis in Athens, but also abroad.

Petros Marmarinos has run a workshop for the past 20 years and today sells his creations to foreign buyers. He also makes smaller decorative and utilitarian pieces that he sells via his website and social media to people all over the world.

“The crisis forced me to look for solutions beyond Greece’s borders,” he says. “Most of my customers are in France, but I also have quite a few in the United States and China. I have no complaints about demand, but market prices have dropped and our work does not pay as well as it once did,” he notes.

The crisis has affected most of the marble craftsmen in the area and Markos Trigonis is no exception.

“Our profession has been hit hard because anything related to ornamentation is not a priority,” he says. “My son, who is 9, is showing an interest in this work, but I have my reservations about encouraging him given the situation. I haven’t given up, though, because I love what I do and I want to honor the legacy of my forebears. Anyway, things may get better in the years to come.”

A volley of pings from hammers striking stone rings out from the Pyrgos School of Fine Arts as students learn the craft. The school, which belongs to the Greek Ministry of Culture and is funded by the Evangelistria of Tinos Foundation, is instrumental in propagating the tradition of marble crafts.

“We have students from all over Greece, who come here because they want to learn how to work marble either for art or to do restorations,” says sculpture professor Leonidas Halepas, a graduate of the Athens School of Fine Arts who returned to Greece recently after several years abroad.

Halepas has run the Tinos school for the past three years and together with teachers in painting and marble sculpting teaches some 40 pupils. “It’s a three-year course that is open to all age groups. Our students are aged from 18 to 45 and 35 percent are women,” he notes.

Grigoris Androulakis is 25 years old and came to the island from Thessaloniki in northern Greece two years ago with a yearning to learn everything about marble. It is a privilege, he says, to have such specialized skills in this job market.

“I see it as an expertise that is not taught anywhere else,” he says. “I believe that the knowledge I am obtaining here will be useful in helping me get into a specialized field that has a future.”

The school, which has been in operation for 63 years, is also a stepping stone to the Athens School of Fine Arts, as it offers two scholarships a year for the respected institution.

The color and design of the Parthenon frieze