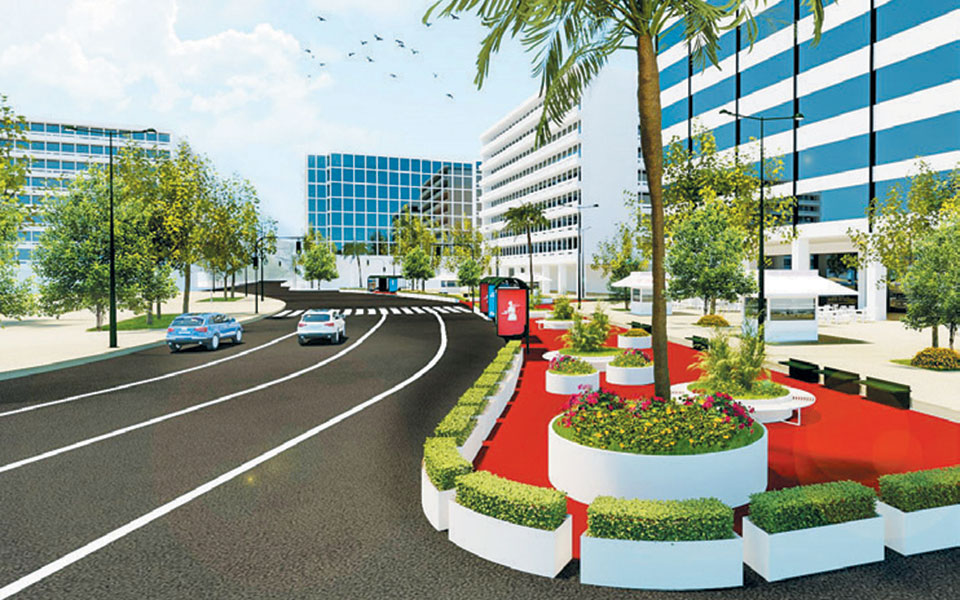 The cost of the revamp project has been estimated at around 50 million euros. 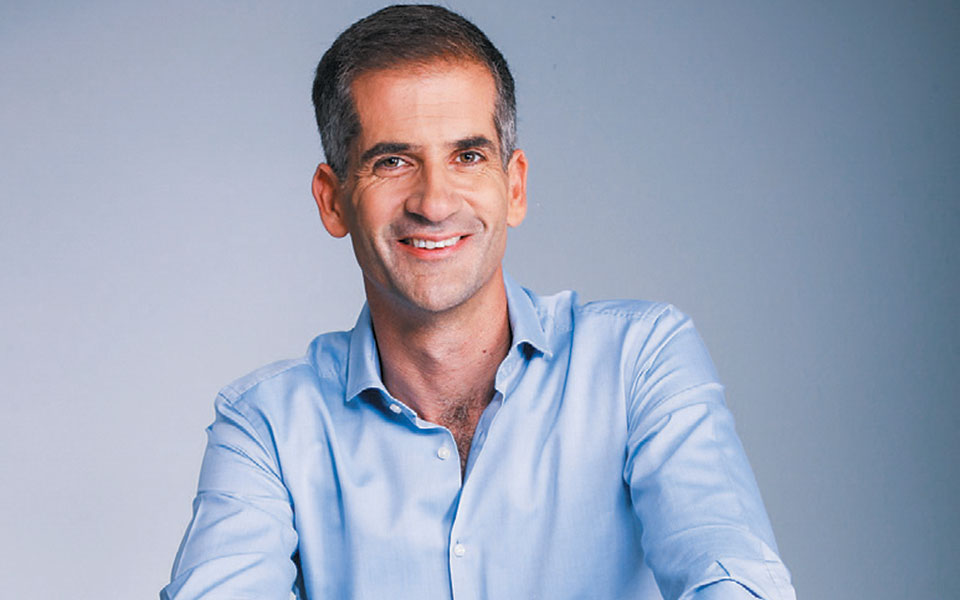 Ranging from the changes being planned for Panepistimiou Street to the recent revamp of Omonia Square, my discussion with Athens Mayor Kostas Bakoyannis was focused on his plans for the “Grand Walk,” as he’s dubbed an ambitious overhaul of the city center. The capital’s new mayor, elected in May 2019, also responded to criticism over last week’s unveiling of the new fountain in Omonia.

Scenes of crowds at the launch of the Omonia Square fountain sparked reactions and sent out the wrong message. How do you respond to critics?

The project was ready in March and we postponed the unveiling because of the lockdown. We eventually unveiled it last Thursday because we believe that Athenians need this space now perhaps more than ever. We obviously didn’t organize a party or a formal opening. We didn’t make speeches. I visited the square for a few minutes, just to see the fountain being switched on and to thank the donors. The Municipal Police were there and even had bullhorns, asking people to observe social distancing. Our big mistake, though, was that we failed to predict that people would stop to admire Omonia. I hope these bad days will pass and Omonia will become a place where people can come together, safely, every day. After all, Omonia is here to stay.

Aren’t you concerned that this incident may have helped cultivate the impression of double standards as regards the restrictions?

I admitted to the mistake immediately, sincerely and without excuses, addressing the immediate issue at hand but also any impressions it may have generated without that having been the intention. The important thing is that it’s not true: There are no double standards. The standards are the same for everyone, everywhere. This is, after all, why everyone at the municipal authority has been going above and beyond to keep Athenians safe.

You recently unveiled a major pedestrianization plan dubbed the “Grand Walk.” Which roads will be affected first and when?

The first phase – the pilot phase that is – will be carried out immediately, because of the epidemic. The way it will be carried out is one of the project’s great innovations. Very soon, we will have a makeshift version of the project so that everyone – residents, workers and visitors – can experience it as it is being created. In practical terms, this means that changes to traffic flow will be implemented by the end of June and the streets in question will be given to pedestrians with low-key, temporary interventions. You will be able to walk along the streets at the same time as the construction work proceeds. Instead of closing them until the project is finished – in four years’ time, that is – we will coexist with it. It will become a part of our day-to-day life. We will live with it in – pardon the expression – a state of urban osmosis. Cities are living organisms and you need to respect them. This project is deeply democratic and participatory, because this is what Athens is like.

There have been numerous studies in recent decades for “unifying” Athens’ archaeological sites that have not panned out. What makes your plan different?

To quote Victor Hugo: “One cannot resist the invasion of ideas.” It would be unfair if I didn’t admit that this proposal is based in many respects on those that came before it. But today is today and the coronavirus has dictated the adoption of good practices in many capital cities. Inspired by past proposals, we spliced the new plan with new data in terms of methodology and execution. We found reliable partners – like the National Technical University of Athens (NTUA) – and secured broad consensus, an alliance with the other political forces, with agencies related to the city and with the Athenians too. Let me take the opportunity to say a big thank you to the other parties in the municipal council and to everyone else who supported this proposal. And as for the Athenians, we told them we were coming to shake things up, and they said, “Go ahead.” So we are.

The study you presented argued that 72% of vehicles in the city center are just passing through. Have you studied what closing much of the center off will mean to the streets around it, especially now when commuters are relying on their own cars more than on public transport because of the coronavirus?

The NTUA study shows that the time motorists in the areas in question spend in their cars will in the worst-case scenario increase by just 4% and even less or not at all in the broader downtown area. It also shows us that we are not just giving greater priority to pedestrians and cyclists, but will also reduce the journey times of buses in the city center by 20%. This means more buses in less time and less of a crush. The coronavirus will not last forever, but even with this fact in play, the city is being endowed with 5 hectares more public space. This is invaluable given that public space [has become more important] as a result of the disease.

How do you plan to ensure that this public space is not gradually taken over by cafe tables and chairs?

The rules governing the balance between free space and tables and chairs are not changing. Quite the opposite. We have come up with a special plan to protect public space.

There has been some concern about the designation of the areas that will be transformed under the plan. What do you have to say about that?

Mixed use is what is going to help upgrade Athens as a whole. The city cannot survive only as a sterile tourist attraction. Athens is not a display window. Even tourists come to the capital for the experience of a city with color, history, culture and a modern lifestyle. This is what the project is hoping to elevate.

Can you have homes, shops and hotels in the center without damaging its historic character? The pandemic has already emptied neighborhoods that have invested heavily in tourism.

The change this urban intervention is trying to accomplish, believe it or not, is to bring balance and consonance. This revamp is aimed at benefiting everyone: residents whose quality of life will improve and whose “backyard” will get bigger; shopkeepers who will see the value of their business grow; visitors and workers who will never want to leave; and the new residents we want to attract – families and young people seeking a good quality of life. The intervention’s value will increase exponentially the longer we’re exposed to it.

This is the biggest intervention in public space that Athens has seen in many years. How will it be executed? Will there be architectural competitions?

The project is being carried out in sections, so there will be competitions where these are required. At the same time, though, we will also use and update older studies.

Several architects and organizations have accused you of overlooking them for the revamp of Omonia Square and are concerned you will do the same now. How do you respond?

This is a project that is a breathing, evolving and transforming thing. No one is being excluded and no one is being ignored. But this does not mean I will allow nonsensical bureaucracy and obstacles to stand in my way. This is, after all, the mentality that resulted in your previous question about the studies that never came to fruition.

What you call nonsensical bureaucracy others call due process. What sort of example is the country’s biggest municipal authority trying to set?

This is faulty reasoning. I never suggested that our efforts to overcome bureaucracy, which is not something new, are in any way linked to our respect for the institutions. As citizens, we have all experienced the impact of red tape on many projects. On the other hand, we have to deliver the projects we undertake within the given timeframe. This is the responsibility we signed up for and our duty to the citizens. I also serve an institution and always operate within the context of its rules. And this is precisely the example the country’s biggest municipal authority strives to set: respect for institutions and a commitment to overcoming obstacles, to being more practical and effective. We want to deliver actions, not theories.

The cost of the project has been estimated at around 50 million euros, according to the City of Athens website. Can the municipal authority cover this cost, or will you be looking for private sponsors?

We can afford the first phase of the project. After that, we will add subsidies from European structural funds (ESPA), the Public Investments Program and the European Investment Bank. But we will also make use of a program called “Adopt Your City,” which is aimed at private parties, and, yes, we will get sponsorships.

If you find that the project causes more problems or reactions than you had originally planned for, what will you do? Do you have a Plan B?

We like to say that Athens’ Grand Walk is a walk we will all take together. This isn’t just a slogan; it’s the essence of the project. In practical terms, this means that it will be adapted, as it evolves, for those doing the walking. Plan B is part of the plan from the drawing board.

After waiting for decades, Muslims in Athens finally get a mosque