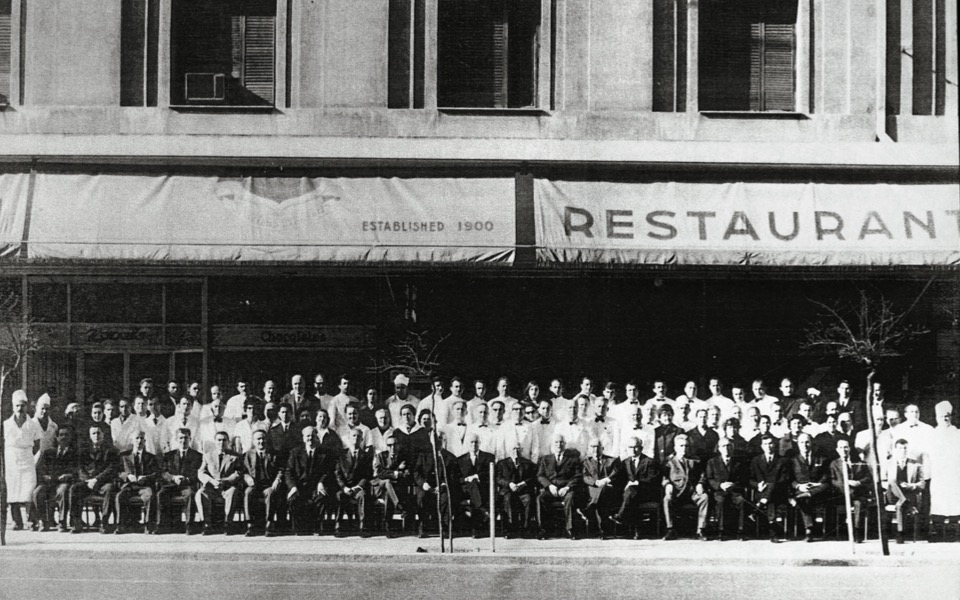 The Zonars staff pose for a family portrait. 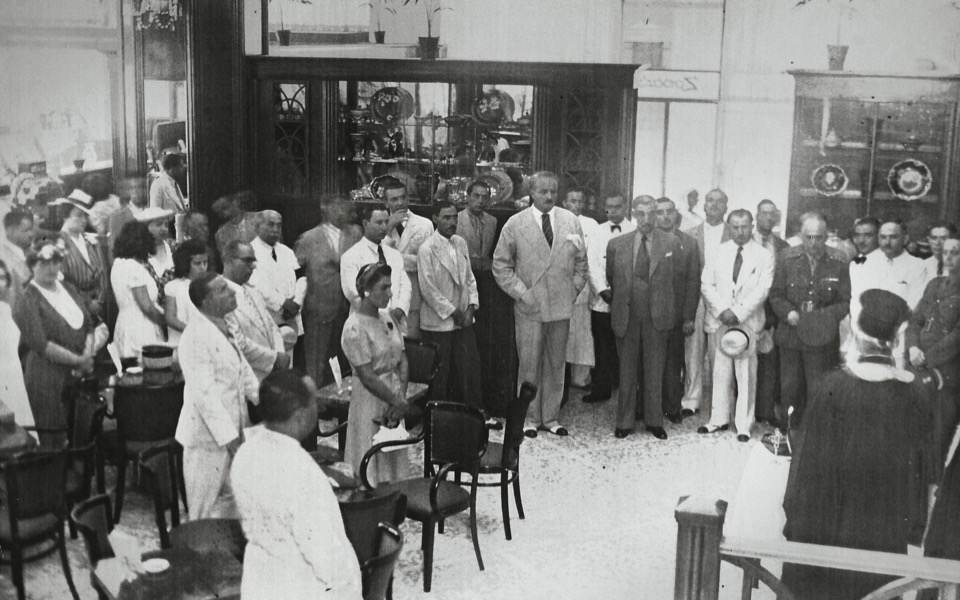 The blessing of Zonars by a priest. The patisserie was inaugurated in August 1940, a week after the Elli was torpedoed, only to close again in April 1941 when Greece was invaded by Nazi Germany. 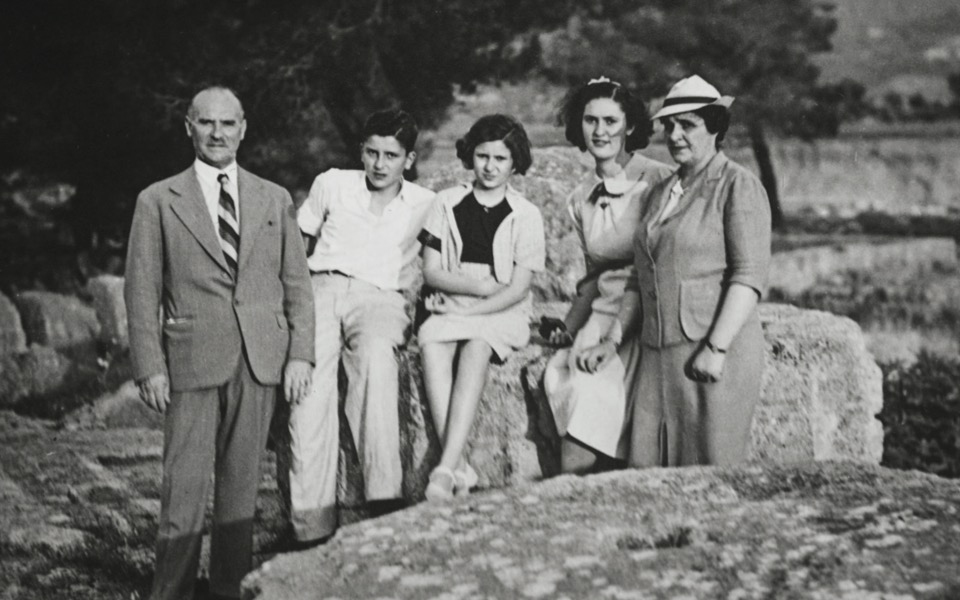 The Zonaras family on an excursion during the interwar years. 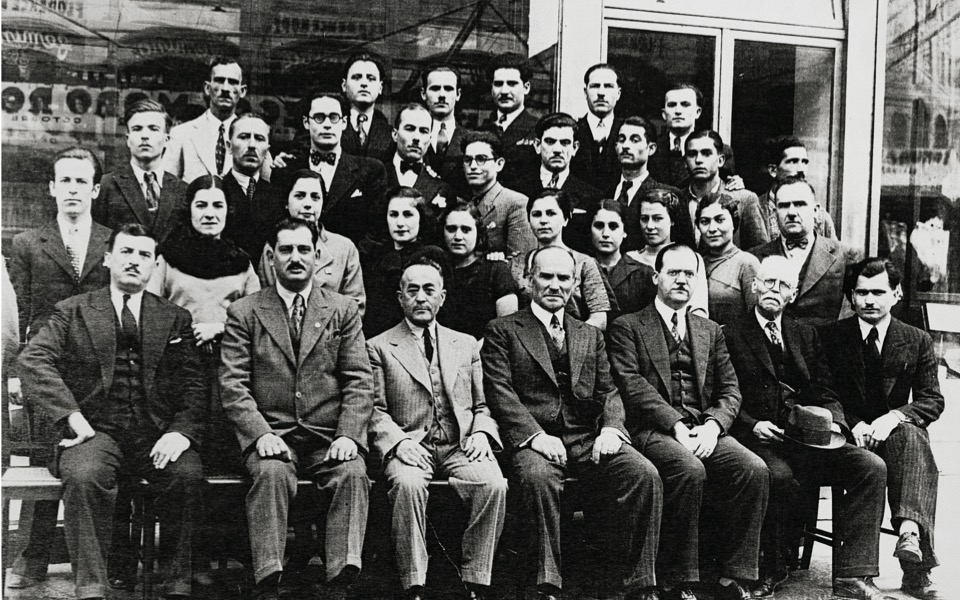 Another family photo of the Zonaras staff. 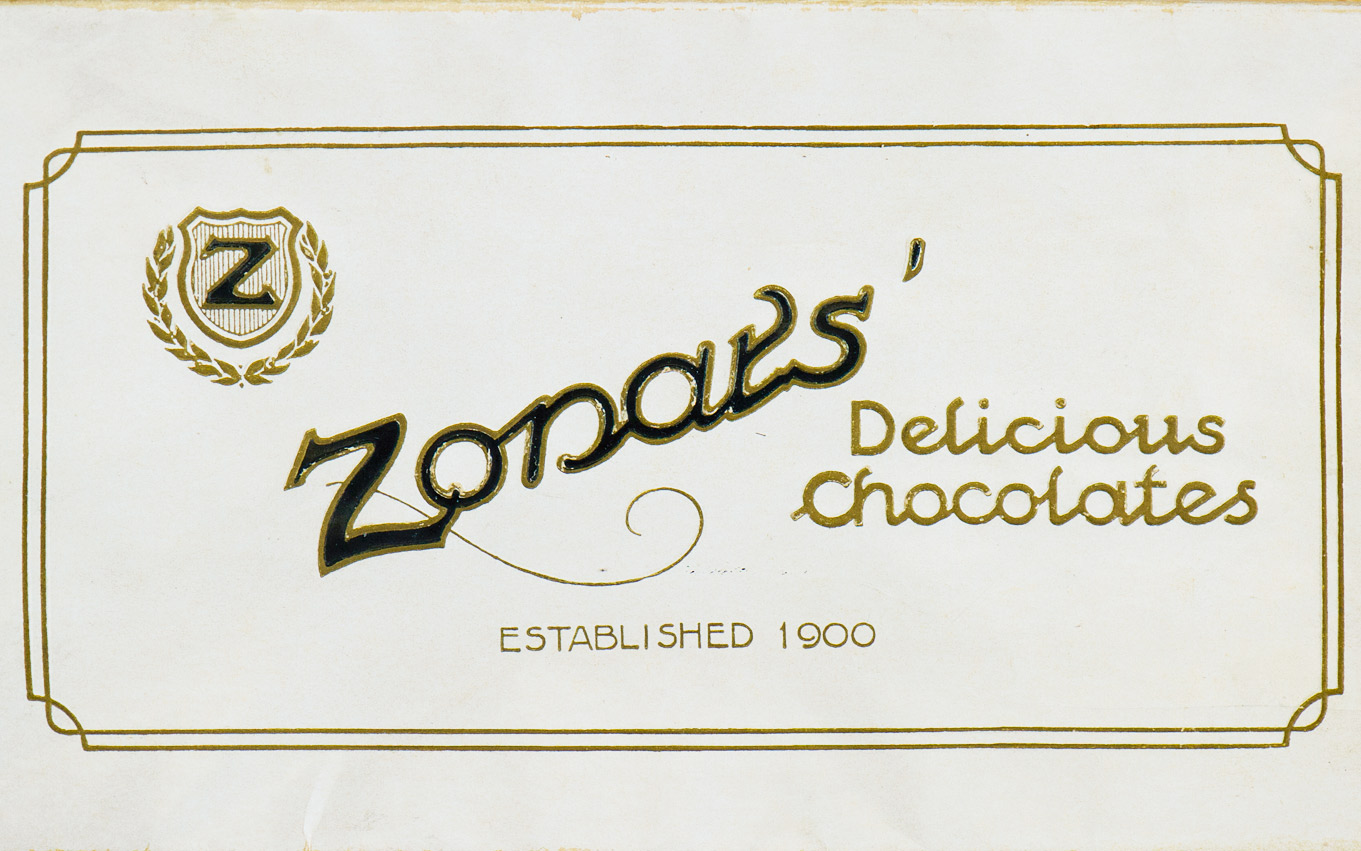 The emblematic label on a box of chocolates. 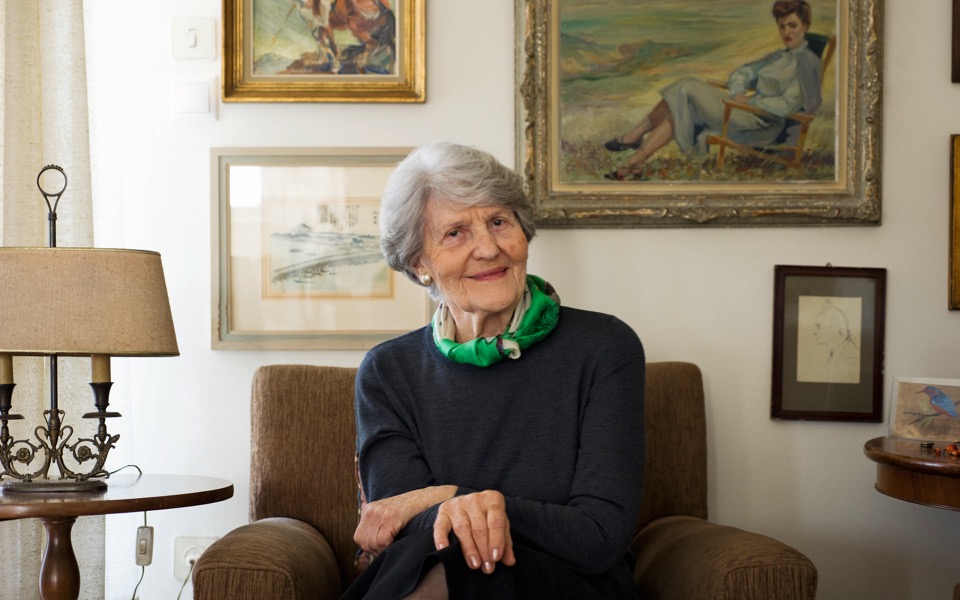 Listening to 92-year-old Alexandra Alexandraki narrate the extraordinary life of her self-made father, a businessman whose name has been identified with the capital’s most resilient dining spot, you come to appreciate the boundless energy of the hardworking Greek.

Born in 1873 in Saranta Ekklisies, eastern Thrace (now Kirklareli, Turkey), Kalliklis Zonaras lived life to the full. Through financial crashes and wars (not to mention the German occupation of Greece), he stood tall, taking care of those around him.

“He was philosophical and optimistic by nature. Even at times of major crisis he would drink a glass of water and go to bed in the belief that tomorrow was a new day which would allow him to fix the situation,” said Alexandraki. “And, indeed, that is what happened.”

Zonaras was named Kalliklis after an old Thracian tradition calling for children to be given ancient Greek names. He was the eldest of seven – five brothers and two sisters. His father, a well-respected, educated gentleman who read a French newspaper every day, owned a grocery store that stocked everything from musical instruments to food supplies. At one point his father decided to send Kalliklis off to study at the Great School of the Nation (Phanar Greek Orthodox College) in Istanbul.

Following his graduation, Zonaras left for Bucharest, where he began working for an uncle. He was 27 when he decided to go to America in search of a better life. He arrived in New York by boat before heading to Dayton, Ohio, where his family had some acquaintances.

He spent his first year in Dayton working at a Greek pastry store, where he specialized in chocolate production. He changed his name to the easier-to-pronounce Charles Zonars, and in less than six months had opened his first store. In the next two years he founded a second store and invited one of his brothers to join him in America. By 1908 another two more stores had been added, prompting the entire family, including Zonaras’s parents, to move to Ohio. “A small community of people from Saranta Ekklisies was already in the making,” noted Alexandraki.

The happy times did not last long, however. A terrible flood hit the city in 1912 and all of the Zonars stores were destroyed. While Dayton was declared in a state of emergency, Zonars got hold of a car and began touring nearby towns and villages, cutting deals with pastry shops for daily deliveries of sweets and ice cream. Back in Dayton he put up notices in his stores: “Cheer up. The worst is yet to come. [But] Zonars has ice cream!”

“That was it,” said his daughter. “All those people affected by the disaster rushed to buy sweets from stalls set up outside the shops. Before the end of the month my father was rebuilding his fortune all over again and all the family stores had reopened. Once that storm had passed, he decided to embark on his biggest dream yet and travel around the world, inspired by Jules Verne’s Phileas Fogg. His idea was to circle the globe from West to East. In 1913 he packed his bags and took off. His first stop was California, followed by Hawaii, where he stayed at a hotel owned by a Greek. He then traveled to Japan, before crossing to mainland Asia and Shanghai, where he also came across a number of compatriots. He visited China and reached the Himalayas, a place he had always dreamed of. My father found a spot in the foothills of the mountain range with a spectacular view of the mountain tops at dawn. It was the most strikingly beautiful view he had ever come across, a memory he carried with him until he was very old.”

He then went to India, Arabia and Africa. He reached the Middle East, where he visited the Church of the Holy Sepulchre in the Old City of Jerusalem. His next stop was a familiar place, Istanbul, from where he took the train to Paris, bypassing Greece, which was at war at the time. He departed from the port of Le Havre for New York and returned to the point of departure, Dayton, bringing exciting stories from the globe’s most remote corners. Images from his 11-month odyssey are on display at his daughter’s elegant Kolonaki apartment.

Zonaras traveled to Greece in 1920, where he set up a factory to manufacture boxes with American machinery. The investment failed, but in the meantime he met the love of his life, Athenian beauty Eleni Theofilou. She had no desire to move to the US and leave her family, so her future husband gave in and decided to stay in Greece. Besides, money was still being transferred from Ohio, where business was flourishing. That was until the Wall Street Crash of 1929.

Following the failure of the factory, he set up a small chocolate workshop on Liossion Street in Athens. The chocolates were packaged in pretty boxes before being dispatched to other stores under the Zonars label. Along with his business partner Pantelis Nikolakopoulos, the tireless Zonaras also set up a small retail facility on Panepistimiou Street in a building that today faces the now-legendary Zonars cafe-restaurant. The venture proved a financial success and a culinary triumph, and it was where savvy Charles first introduced locals to the “Chicago” ice cream – a combination of vanilla ice cream, bitter chocolate and caramelized almonds.

When the construction of the Hellenic Army Pension Fund Building began, Zonaras grew worried. “He knew that if a pastry store was to open on the building’s ground floor it would take away his clientele. So he quickly moved to lease the space himself. [Rival pastry store owner] Flokas had also sought to rent the space, but was unable to pay the exorbitant rent,” Alexandraki recalled.

Zonaras hired leading craftsmen and architects to develop the capital’s top pastry spot, Alexandraki recalled. He also sought gifted seamstresses to sew linen tablecloths. By August 1940, everything was in place for the grand opening. Then disaster struck again: A week prior to the official inauguration, the Greek warship Elli was torpedoed off the island of Tinos, paving the way for Greece’s entry into WWII two months later. The new venue did open its doors on August 23, only to close again in April 1941.

During the Nazi occupation, Zonars was taken over by the Germans and two former waiters appeared at the pastry shop in Nazi uniforms. It turned out they had been enemy spies, posing as staff to gather information on politicians, journalists and British citizens who used to hang out there. Meanwhile, the tiny chocolate store opposite Zonars managed to stay open and allow the family to make a living.

“This was a period of blackouts and major food shortages. You wonder what kind of sweets one could come up with back then. My father’s top craftsman worked miracles. There was no sugar and he exhausted his creativity by using honey, raisins and nuts. He even came up with an almond pastry cream,” noted Alexandraki, who was a teenager at the time.

In the Greek Civil War, the family home was located near a city war zone. During ceasefire periods, Zonaras walked to the small store to bring back food provisions for the family and the entire neighborhood.

“That’s how we pulled through. As soon as the Germans left, the British came and took over Zonars. We waited patiently and they eventually left in 1950, leaving behind a small amount in compensation. My father used the money and also took out a loan in order to renovate the place and start operating it again,” said Alexandraki.

It was during the ensuing high times of the postwar period that Alexandraki met her future husband, Alexandros Alexandrakis, an artist who had fought in WWII and whose work made during the Greek-Italian War of 1940 received wide critical acclaim.

“The war wounds were still deep, but morale was high and there was hope regarding the future,” Alexandraki said. “Zonars became high society’s meeting point, but even the less privileged stood with dignity and aspired to be well dressed and display their good manners. Rudeness and misery were not as widely observed as today. Back then, at a time when everything was half-destroyed, people wanted to feel good again.”

Zonaras visited the pastry shop on a daily basis and was in charge of all operations. He was already in his 90s when a deadly earthquake hit the Peloponnese in 1965 and he decided to provide assistance. In association with the country’s welfare services and private parties such as Kathimerini publisher Eleni Vlachou, he reached the temblor’s hardest-hit areas. As a result of his efforts and presence, a number of schools were established in the area for children whose villages had been seriously damaged during the quake.

By 1968 Zonaras had realized neither of his children would take over the family business and decided to sell it to the owners of Dionysos, a restaurant near the Acropolis. The venue changed hands again in 2000. Earlier this year, a fully revamped Zonars was reopened by Chrysanthos Panas.

Zonaras would be pleased to know that the venue has once again become the city center’s popular meeting point.

A night to remember: the Athens Observatory